A sign is posted outside of the PayPal headquarters in San Jose, California.

PayPal had a break-out quarter, sending its stock surging after reporting earnings.

The payments company beat Wall Street’s estimates across the board for the third-quarter results Wednesday evening. Investors applauded the outperformance, sending PayPal shares up more than 8% in pre-market trading Thursday.

The San Jose, California-based company reported 61 cents of adjusted earnings per share for the quarter, vs. 52 cents expected by analysts polled by Refinitiv. Revenues also outperformed, with $4.38 billion in the quarter vs. the $4.35 billion expected. Its forward guidance for next year was also in line with expectations.

“PayPal’s 3Q19 results were the strongest we’ve seen in at least a year,” Lisa Ellis, research analyst at Moffett Nathanson, said in a note to clients Thursday. “All in all, a very clean, strong, quarter.”

Total payment volume — a closely watched metric for PayPal and its peers — came in at $178.7 billion, also above expectations. That growth accelerated 25%, better than the past two quarters and all of 2018, according to MoffettNathanson.

Its mobile payment app Venmo was a key bright spot. Despite not yet breaking even for its parent company, the app saw 64% growth in payment volume year over year. Venmo also processed more than $27 billion in the quarter. On a call with analysts, CEO Dan Shulman called the app “an incredibly powerful platform for engaging consumers” and that he was “pleased” with its monetization progress.

“We see a lot of good runway in front of Venmo,” Shulman said. PayPal ended the third quarter with an annual revenue run rate just shy of a $400 million, compared to $200 million last quarter. 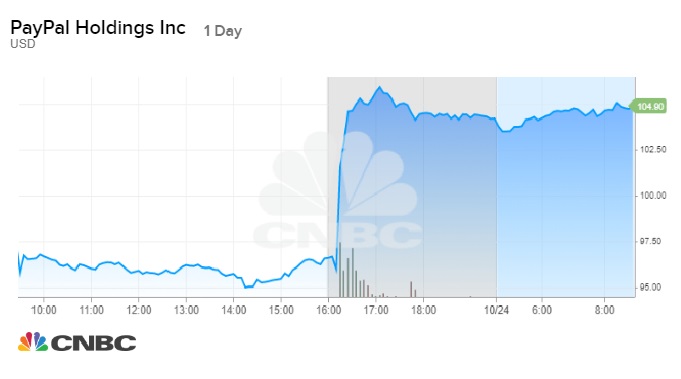 PayPal also announced good news in China. After years in the works, PayPal got approval from the People’s Bank of China to acquire a 70% stake in Shanghai-based GoPay. The start-up has digital payment licenses in China. That deal is expected to close in December, and will make PayPal the first licensed foreign-payment platform to operate there.

“This is a very significant development for us and has the potential to dramatically expand our total addressable market and our long-term growth prospects,” Shulman said on the call.

Still, some investors had been worried about an upcoming expiration of the PayPal-eBay exclusive operating agreement. The roll-off from eBay, which used to own PayPal, is seen as a headwind for earnings into the next two years.

“PayPal will emerge from the eBay transition in a stronger competitive position and healthier financial position,” Ellis said. “The primary uncertainty in the eBay roll-off is its exact timing (how much in 2020, 2021, or beyond) – its overall magnitude is well-defined.”