Tesla’s stock is set to pop big when trading begins on Thursday, after the electric automaker turned in an unexpectedly profitably third-quarter and better than anticipated progress toward getting its Shanghai factory operational.

“Skeptics had legitimate concerns in the past, but Tesla is now building cash, winning market share, and boosting margins – all while preparing to launch products in untapped segments and regions,” Piper Jaffray analyst Alexander Potter said in a note to investors after the results. Piper Jaffray has an overweight price target on Tesla with a $372 a share price target.

Shares of Tesla rose nearly 19% in premarket trading from its previous close of $254.68. If the gain holds through trading on Thursday, it would be Tesla’s best single day of trading since May 2013.

Set to open above $300, Tesla shares would return to levels not seen since February this year. However, the stock is likely to remain negative for the year, as it was down 23.5% year-to-date before reporting earnings. 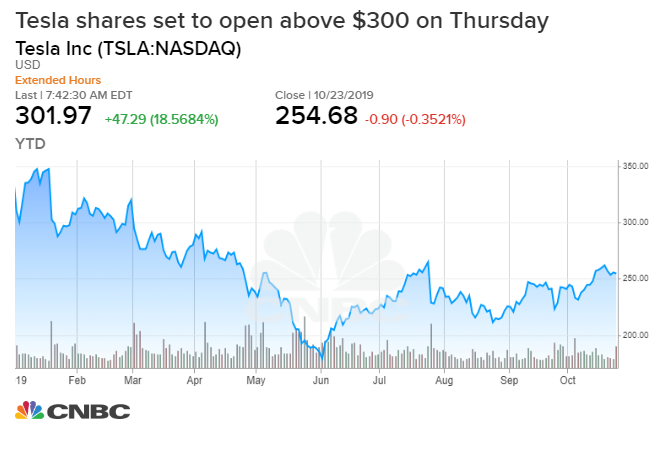 “Moreover, management projected a bullish tone on near-term demand, indicating that they were ‘highly confident’ in exceeding their Q4 deliveries guidance of 105k cars,” Bernstein analyst Toni Sacconaghi said in a note to investors. Bernstein has a market-perform rating on Tesla with a $325 price target.

Even more skeptical analysts, such as UBS’ Patrick Hummel, noted that Tesla showed “solid” free cash flow in the quarter. As UBS has a sell rating and $160 price target on UBS, Hummel said the firm intends “to review our financial model on Tesla following the results.”