Grim as it may be, backup-generator maker Generac Holdings is soaring as power cuts in California become the norm.

The stock opened at a new all-time high on Friday, and is up 85% for the year.

This week PG&E announced another large-scale preemptive power cut for hundreds of thousands of customers in California. PG&E is currently going through bankruptcy, and the company doesn’t seem to have an immediate solution for how to keep the power on when the threat of fire is high. So while PG&E falters, there could be much more upside ahead for Generac. 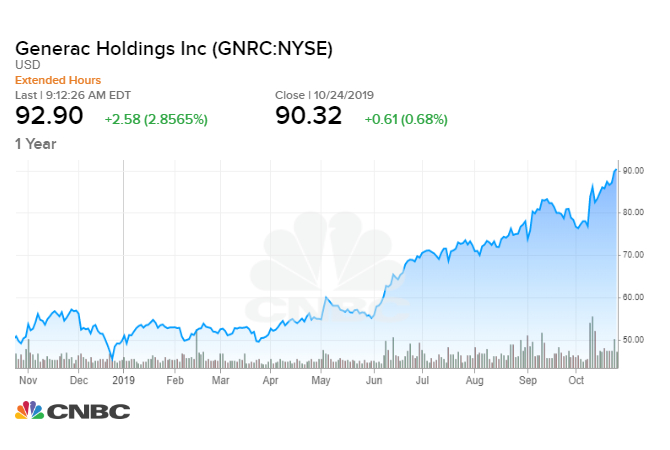 “This caught us totally off guard. We didn’t see the largest utility in the US coming out and saying ‘look our only solution is to turn the power off,'” Generac Holdings CEO Aaron Jagdfeld said Friday on CNBC’s “Squawk Box.” ”The (PG&E) CEO came out I think a couple of days ago and said a decade, it could be 10 years, of this kind of activity.”

California’s once reliable power and mild weather has meant that it hasn’t traditionally been a key market for home generators. But Jagdfeld said it’s becoming a “new element for our business,” and couldn’t mask his surprise that PG&E‘s only solution was to cut off power for millions of people. He said that the company has seen a “three, four hundred percent increases in volumes out in California.”

And California is not the only state suffering from extreme weather patterns and a utility grid that often can’t keep up. Jagdfeld said that generators are also “flying off the shelves right now” in the North East as hurricanes and ice storms hit.

The company also supplies backup power utilized by wireless companies, which the California outages has shown to be a burgeoning market.

“What’s amazing is most people don’t realize, and I think people are learning right now in California, you can’t even get some of the basic services … I mean everyone uses a wireless device now, and those networks go dark when they don’t have power. We’re one of the largest suppliers of backup power to all of the major wireless carriers, but the penetration rates are still very low, less than 30%.”