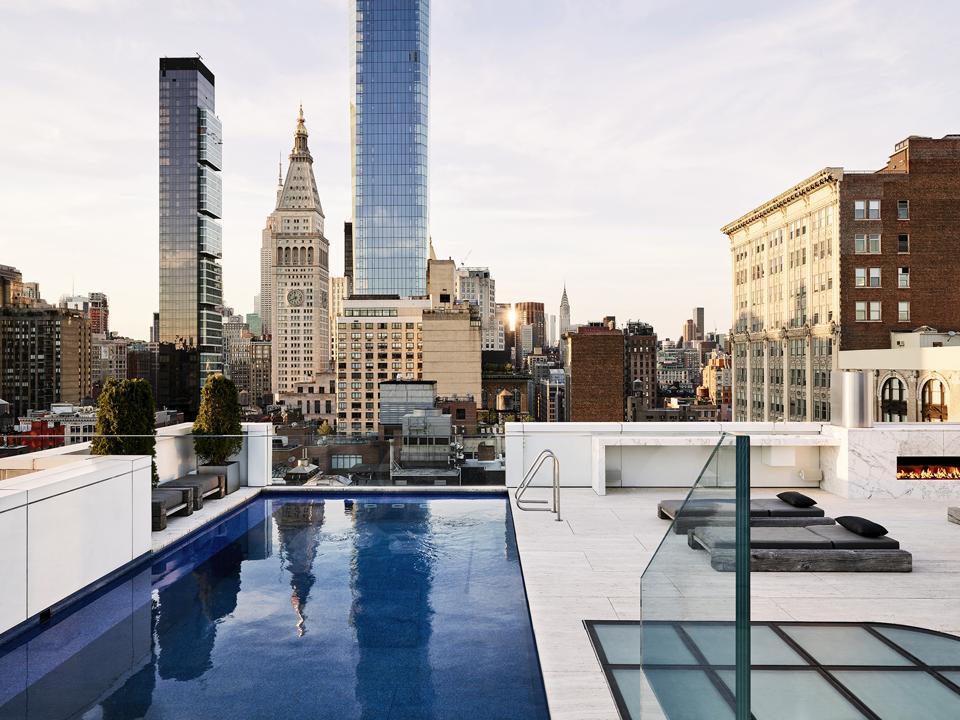 If you’re going to buy a New York City penthouse, you may as well get the one with the private rooftop pool.

An three-bedroom condo at the top of the 17-story 240 Park Ave. South in the Flatiron district of Manhattan is on the market for $30 million.

It’s represented by Nikki Field of Sotheby’s International Realty, who already made headlines this week when she listed the late philanthropist and activist Marian Sulzberger Heiskell’s former co-op in 870 United Nations Plaza for $2.99 million.

The 5,646-square-foot penthouse in 240 Park is being hailed as designer Soren Rose’s “magnum opus.” Its current owner purchased the space unfinished from the building developer in 2009 for $6,409,883. Since then, Rose, along with a team of Danish craftsmen, spent the last six years designing the space in fine detail.

“It is quite simply the most beautifully-designed home in New York, and possibly the world,” Field says.

“This property is truly one of a kind, nothing like it exists in all of Manhattan,” she adds. “The attention to detail, quality of handpicked materials, views and location are unmatched.”

Its 30-foot swimming pool is constructed with Mosaic Bisazza tile and is flanked by a Roman travertine terrace, a gas fireplace, and an indoor/outdoor kitchen with a wet bar.

The apartment itself is accessible via a private elevator, through a sculpture door that can only be opened with custom keys, which were designed to be worn as jewelry.

Its great room is crowned with 24-foot ceilings, and has six picture windows and a porthole looking into the pool. It also has a gas fireplace, along with a flat-screen TV which is hidden behind unless revealed by touching a button.

The home’s piece de resistance, however, is a 24-foot-tall wall made of Verdi Alpi marble taken from the same quarry in the Swiss Alps that German-American architect Ludwig Mies van der Rohe sourced in the 1920s for the Barcelona Pavilion in Spain.

To find the exact stone that Mies van der Rohe used for the pavilion, Rose traveled to the quarry and consulted locals. He then brought 45 panels across the pond to the Park Avenue penthouse, where he put them together using book matching, meaning the stone markings are perfectly lined up at the seams.

How To Shrink High Taxes On Your Required Minimum Distributions
Sam Bankman-Fried Bought This Washington DC Townhouse, Now For Sale At Exactly What He Paid For It
Retirees Must Ask These Questions Before Hiring A Financial Professional
3 key things to know before opening a home equity line of credit
Charts suggest investors should bet on ‘work horses’ in the Dow Jones Industrial Average, Jim Cramer says