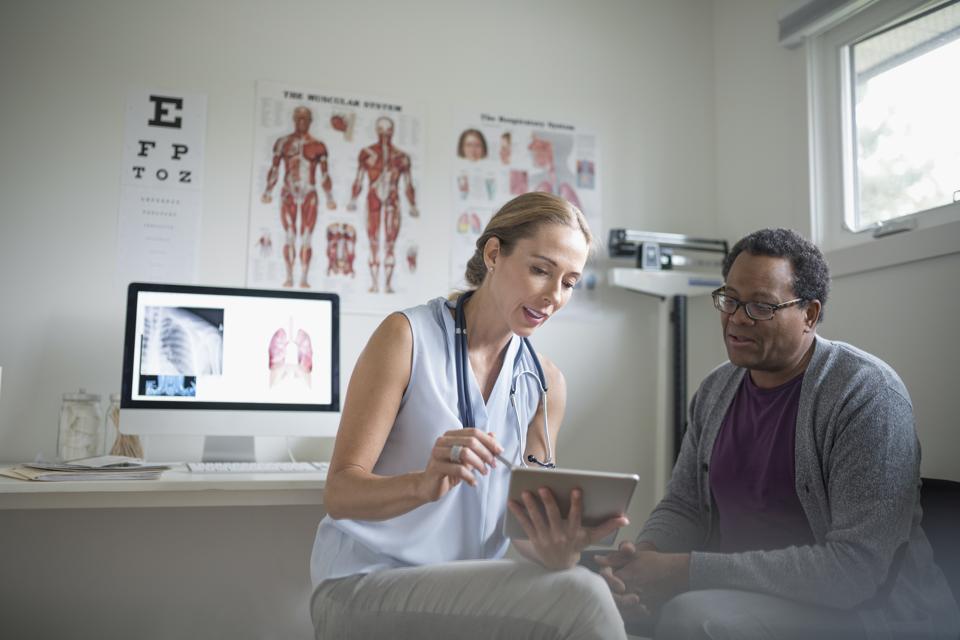 You know the old expression, “Everybody talks about the weather, but nobody does anything about it.” I sometimes feel that way about the high cost of health care.

But Dr. Marty Makary, author of the new book about America’s health care system — The Price We Pay — is someone who’s actually doing something about bringing down medical costs. I recently interviewed him about this, and to hear him discuss the book’s theme (and subtitle): what broke American health care and how to fix it. Highlights are below.

Makary, a cancer surgeon and professor of health policy at Johns Hopkins University, gained attention creating his Surgery Checklist, which turned into the bestselling book by Dr. Atul Gawande (the 2015 Next Avenue Influencer of the Year), Checklist Manifesto.

These days, Makary is executive director of a fascinating medical initiative called Improving Wisely. It’s a Robert Wood Johnson Foundation project to lower health costs, surveying doctors about the number of procedures they do per patient and getting outliers performing far more than others to adjust to the norms. He’s also founder of the Johns Hopkins Center For Surgical Outcomes Research and Clinical Trials.

My conversation with Makary:

Next Avenue: The subtitle of your book is What Broke American Health Care and How to Fix It. Can you briefly describe the key factors that you think broke American health care?

Dr. Marty Makary: Politicians talk about different ways the system is broken, not how to fix it. I believe the underlying drivers of the affordability crisis are areas where there’s broad consensus on how to address them.

Those drivers are pricing failures; administrative waste or middlemen and inappropriate care, of which the opioid crisis was one small glimpse.

What do you mean by pricing failure?

If airlines billed us after a flight and didn’t show us prices, we would have unstable markets. That would enable price gouging. Now we learn every day about people getting fleeced by crazy hospital bills that hospital leaders themselves have trouble justifying or interpreting.

The stakeholders playing this game are making record high profits off the backs of workers with health insurance, often by hitting them with surprise and inflated bills.

How did you see that during the reporting you did for the book?

I visited families across America who did nothing wrong and have full-time jobs and have insurance, but they had their lives ruined by crazy medical expenses. There was no way they could have prepared for them.

My feeling is that if a hospital doesn’t have the courtesy to show its prices for elective services, they have no right to ruin someone’s credit history or put a lien on a home or garnish a paycheck.

And where’s the administrative waste?

All the hidden ways people pay for the expensive health care system, which has bloated to $3.5 trillion. At the grassroots project I founded, Restoringmedicine.org, we have tips on negotiating medical bills and we do advocacy work for public accountability around hospital bills.

There’s the business of medical coding, which we doctors hate to do. We like taking care of patients. Look how much energy and money is spent on this.

And when unpaid medical bills turn into bad debt and a collections process, even legal proceedings. That’s expensive. Look at how much energy and money is spent on that. It’s clear not only that a lot of it is exhausting, but it means lost productive time for Americans.

Pharmacy benefit managers [middlemen that manage pharmacy benefits for employees], which don’t exist in other countries, leads to overcharging of patients. The same with hospital drugs and supplies. They’re all part of the money game.

That’s an issue no one is talking about but we need to talk about. In medical school, we were told: make a diagnosis and treat it, reflexively. That misses the appropriateness of treatments. Our fee-for-service system and consumerist culture promotes doing stuff. But we need to pay for quality, not just quantity.

We have a Johns Hopkins study asking 2,100 doctors in the U.S.: What percentage of your medical care, in your opinion, is unnecessary? The average answer was twenty-one percent. In any other industry, if people on the front lines believe that one in five services are altogether unnecessary, you would say that industry is in crisis.

A fraction of doctors respond to perverse medical incentives of doing more. I had spine surgeons tell me at a conference that half of spine surgery for back pain is unnecessary. If they’re right, we have a serious crisis of appropriateness.

It’s multifactorial. Doctors want money and patients wanting help. Sometimes, for doctors, it’s a fear of litigation and concern about malpractice. Sometimes, it’s poor judgement or a lack of being up to date on state of the art care.

The section of your book about how health fairs at churches can lead to unnecessary medical treatments was eye opening. Tell me about what you learned.

I visited a church on a tip from a local cardiologist who told me there was a rampant, growing practice of doctors placing unnecessary stents in leg arteries. He told me the doctors recruited patients at health fairs at churches. My team and I went to some of those churches — the areas were all-black — and saw doctors offering to check seniors’ circulation and that would lead downstream to unnecessary procedures. They were essentially recruiting patients.

I had many meetings with the Department of Health and Human Services and the White House and showed them our experience with practice-pattern measurement of appropriateness. This is one of a number of initiatives they’ve announced with broad bipartisan support. I’m very pleased to see interest in measuring practice patterns.

So, what can be done to fix the broken health care system?

For every problem in the book, I provide a solution or a disruptor fix on a small scale that we need to scale broadly.

How can people find these clinics?

Relationship-based clinics is the term I use. They go by other names, like Iora Health [based in Boston] and ChemMed [based in Florida] and Oak Street Health [based in Illinois]. These kinds of practices started over the last five to eight years and they are growing like wildfire. A new clinic is going up almost every week in the United States. Doctors love them, nurses love them and patients love them.

People can save thousands of dollars a year without a lot of effort. For example, use online sites for prescription drugs like Good Rx and health care price-comparison sites like MDSave.

Are you optimistic about the future of health care?

In the end, when I finished the book, I left very optimistic. We’ve attracted very good people to work in hospitals; hospitals are responding to our plea and doctors are leading the charge against unnecessary care. Although I’m concerned about the erosion of public trust of the medical profession due to the money games.

We are creating a new health care system. It’s funny. Sometimes, things have to be completely shattered for us to realize how bad they are. But then we pick up the pieces and rebuild.

This Is How To Save Social Security And Medicare
Here’s where the jobs are for January 2023 — in one chart
Pension Income Bolstered A Struggling COVID-19 Economy
Cramer’s lightning round: I want to own Sherwin-Williams
Social Security, Medicare should be ‘off the table’ in debt ceiling talks, McCarthy says