It might seem like media companies are finally embracing the future as nearly every major programmer is launching a streaming service.

But examining the streaming products of AT&T‘s WarnerMedia, Disney and Comcast‘s NBCUniversal in isolation, a different concept reveals itself.

The giants of media are tailoring their offerings around their relative strength in traditional pay-TV. The pricing and roll-out strategies of streaming services are linked to how much media companies have to gain, or lose, if consumers start relying on streaming video in lieu of cable TV. As much as the old media giants might envy Wall Street’s years-long love affair with Netflix, the cable bundle still rules. 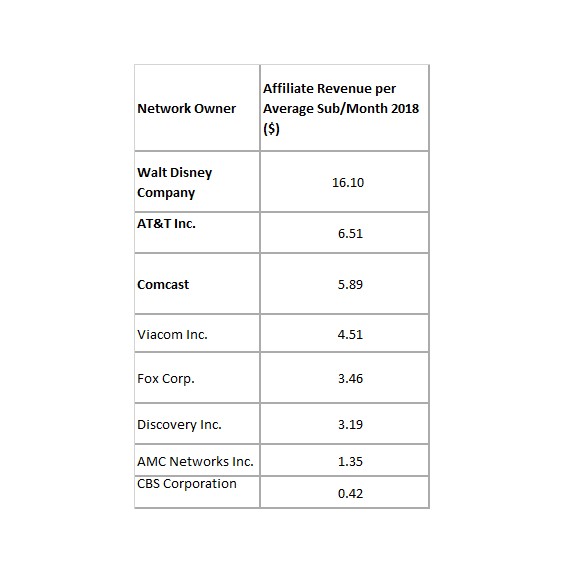 This chart explains the situation clearly. It shows approximately how much each media company currently generates from the cable networks it owns within the standard bundle. Pricing estimates come from SNL Kagan, a research arm of S&P Global Market Intelligence.

For example, for Disney, that’s ESPN and all of the associated ESPNs (ESPN2, ESPNU, etc.) plus the Disney channels, FX, National Geographic and its other owned networks (not including ABC, for which it gets additional broadcast retransmission fees). For that entire bundle, Disney makes more than $16 per cable subscriber per month. In other words, if you pay for a standard cable package, $16 of what you’re paying per month goes to Disney.

AT&T’s WarnerMedia networks, led by TNT, CNN and TBS, bring in about $6.50 per cable customer per month.

Comcast’s NBCUniversal networks — which include CNBC, as well as USA, Bravo, MSNBC, and others — earn a little less than $6 per person. The chart doesn’t include regional sports networks, many of which are owned by Comcast, or a la carte offerings like CBS’s Showtime or AT&T’s HBO, which aren’t part of a standard package.

All of this is important because it helps explain the business considerations behind the streaming wars, which kick off in earnest this fall.

Disney+ will be first out of the date, with a debut on Nov. 12. WarnerMedia will officially unveil HBO Max, its streaming offering, at an event in Burbank, California, on Oct. 29, and it’s going to be available in the first half of 2020. Peacock is coming out around the same time.

Most cool with your canceling cable: HBO Max

AT&T has taken the most aggressive position with its streaming offering in terms of preparing for a world without traditional pay-TV.

WarnerMedia already sells HBO outside the cable bundle, charging $14.99 (call it $15) a month. It has 35 million U.S. subscribers, most of whom watch as an add-on to a traditional pay TV package.

Apart from that, the company brings in about $6.50 from all of its cable networks per month, Kagan estimates. While AT&T owns DirecTV, a national pay-TV distributor, that business is hemorrhaging subscribers.

What AT&T really wants you to do is pay for AT&T wireless. In a few years, AT&T could also provide you with a 5G high-speed home broadband service, competing directly against cable companies.

Realizing he doesn’t have as much to protect in the existing pay-TV bundle as Disney, WarnerMedia CEO John Stankey has decided to offer consumers a robust package of content with HBO Max. He’s spending billions on shows like “Friends” and “The Big Bang Theory” to stream exclusively as part of the package. HBO Max will also include all HBO programming, shows and movies from the WarnerMedia library, new originals and, eventually, (likely several years from now) live programming from CNN, TNT and TBS, including sports, Stankey said in June.

That’s a kitchen sink offering. WarnerMedia is preparing for a future where you aren’t paying for cable TV.

Stankey told CNBC his goal was to get 70 million to 80 million subscribers for HBO Max. Of that, he wants 50 million U.S. susbcribers by 2025, Reuters reported Friday. How realistic is that?

CNBC reported in June that WarnerMedia was pondering a price between $15-$18 per month for HBO Max. If AT&T prices HBO Max at the same $15 price as HBO (or lower), it will easily be able to transfer HBO’s existing 35 million subscribers to HBO Max. However, if it prices HBO Max at even a dollar or two more than HBO, it will need to convince current HBO subscribers to switch in addition to picking up new subscribers. WarnerMedia will announce its pricing of HBO Max at WarnerMedia Day on October 29, according to a person familiar with the matter.

If Stankey can execute his vision, it will be great news for AT&T. 80 million people paying $15-$18 per month for HBO Max is a lot more money than 80 million paying WarnerMedia $6.50 per month for its cable channels (of which only 35 million are paying for HBO). That could vault AT&T closer to the Netflix-like multiples that investors crave.

The question is how quickly will customers cancel traditional pay-TV for a streaming-only world? Without a significant flood of cord cutters, it’s dubious to suspect AT&T can add 15 million more HBO Max subscribers.

If WarnerMedia’s original programming is strong enough, AT&T is well positioned to make a lot more money in a world where four or five streaming services supplant cable TV. But if all the “extra” with HBO Max doesn’t convince many new people to give HBO a try, AT&T risks falling severely short of its subscriber goal — especially when other streaming services are actively hampering the shift away from cable TV.

If Disney truly wanted to transition Americans away from the cable bundle and to a new era of streaming TV, it would offer a product that included all of its content, linear and on-demand. That would include all of ESPN’s content, such as “Monday Night Football” and live games from leagues including Major League Baseball and the National Basketball Association.

Of the $16.10 Disney earns per month from cable subscribers, ESPN and its associated networks take in about $9 for every person that subscribes to a cable bundle, Kagan estimates.

Disney also collects billions each year in advertising revenue connected to live sports on ESPN — people have to watch ads when they can’t fast-forward.

This setup is a wonderful deal for Disney. If you’re a cable subscriber, whether like sports or not, you’re paying Disney $9 per month for ESPN networks, and you’re paying more than $16 to Disney overall.

So Disney is in no hurry to have you cancel cable. That’s why why Disney hasn’t made ESPN available as a separate streaming service yet.

Instead, Disney’s streaming offerings are:

“There’s a migration that’s not going to slow down, it’s going to speed up, to direct-to-consumer services,” said Iger in an interview with CNBC. “But ESPN the linear channel is still very valuable to us and distributors. Down the road you could see a shift [of programming] to some extent to ESPN+, but that’s at a time when we believe the shift from a consumer perspective will be significant enough to warrant that.”

In other words, Disney knows people are going to keep canceling cable but is in no hurry to accelerate this shift.

When Disney decides the time is right, a bundle of Hulu, Disney+ and ESPN is a compelling replacement product for traditional pay-TV. Hulu with ads is $6 per month. Disney+ is $6 per month. If Disney were to make a standalone ESPN service at $10 per month, it would earn $22 a month from consumers. That’s more than the $16.10 it takes in today.

The question is how many of today’s 89 million cable subscribers would actually pay to subscribe to ESPN streaming? Probably far less than 89 million.

Moreover, cable providers know that ESPN’s exclusivity in the cable bundle helps keep a pay-TV bundle alive. That gives Disney leverage to keep boosting prices for ESPN. So Disney is taking the transition nice and slowly.

Comcast, as the nation’s largest cable-TV provider, has the most to lose if you cut the cord, but not just for the obvious loss of distribution revenue.

Comcast’s NBCUniversal brings in about $6 per month from its cable networks and an additional few dollars per month from regional sports networks, with cost varying from market to market.

And just as Disney collects additional re-transmission revenue from ABC, a broadcast network that gets bundled with in cable channels, Comcast gets extra monthly revenue from its NBC broadcast station.

Offering a streaming product that could entice customers to cancel cable doesn’t move the needle for Comcast and could actually hurt the company’s bottom line, especially when factoring in the billions of dollars it would cost for new original programming that would have to be a part of such a service.

That’s why Comcast is giving away its Peacock streaming service for free to all pay-TV subscribers. The company has yet to say how much it will offer Peacock to cord-cutters, although people familiar with the matter say the price is likely to be less than $10 per month.

Comcast has already shown its willingness to incorporate other company’s streaming services into the pay-TV bundle, allowing Netflix and Amazon Prime Video into its Xfinity user interface. This is the world Comcast hopes will survive and flourish.

The pace of cord cutting, and how companies maneuver around customer behavior, will ultimately define the streaming wars’ winners and losers.

WATCH: Apple, Disney and other media giants are ready for the battle against Netflix

Here’s who can claim the home office deduction on this year’s taxes
IRS about 3 to 5 times more likely to audit Black Americans’ tax returns, study finds
States have $70 billion in unclaimed assets. How to check if any is yours
Jim Chanos: Bear market is doing something unheard of in my career
After a tough year for crypto, here’s how to handle losses on your tax return