Barclays told clients it’s “still early” to buy the dip on Amazon, as the e-commerce giant’s period of heavy investment could hurt financials and the stock further before things get better.

“Historically it’s a good idea to buy AMZN shares in the 7th-8th inning of its investment cycles, closer to where we are coming out, but unfortunately it feels like we are only in the 3rd-4th inning,” said Barclays internet analyst Ross Sandler in a note to clients on Friday. 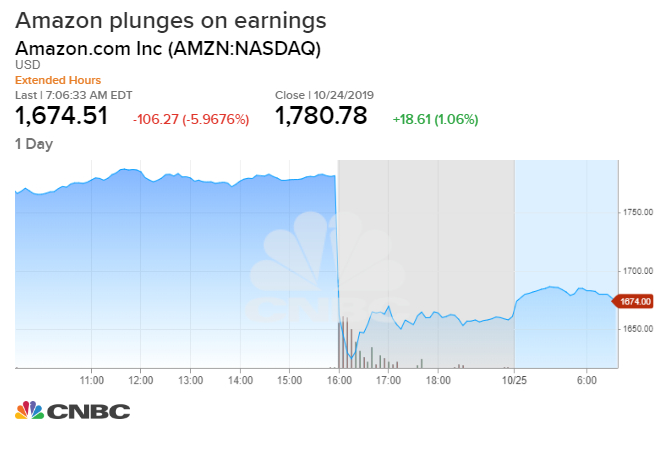 Shares of Jeff Bezos-led Amazon dropped after the company reported third-quarters earning that fell short of Wall Street’s expectations, as a return to a heavy investment cycle cut into the e-commerce giant’s profitability. Amazon spent over $800 million investing in faster delivery over the past few quarters and its net income dropped to $2.1 billion, down 26% from the year-ago period’s $2.9 billion.

“The push to 1-Day is driving up costs and creating stress everywhere in the system from outbound shipping, forward inventory management, fulfillment and headcount, marketing, etc., all of which should persist into mid-2020,” said Sandler.

AWS became another overhang. The cloud business’s reported $9 billion in quarterly sales, falling slightly below analyst expectations of $9.1 billion. Operating income totaled $2.26 billion, up 9% from the year-ago period but below the $2.55 billion FactSet estimate. For the past four years, AWS has been the bulk of Amazon’s operating income, so slowing growth highlighted “the shift to enterprise and longer duration contracts” said Sandler.

Although Amazon beat the Street on revenue for the third quarter, Amazon gave fourth-quarter revenue guidance in the range of $80.0 billion and $86.5 billion, far below the street’s average estimate of $87.4 billion, indicating slowing growth might persist.

In contrast to Sandler, nearly every other analyst on Wall Street recommended buying the dip on Friday. UBS said it sees “any post-quarter share weakness as a good entry point.”

But Barclays is ultimately bullish on Amazon. The firm has a buy rating on the stock and a $2,000 per share price target, which is lowered from $2,180 per share.

Shares of Amazon are down 6% in premarket trading on Friday.