The Gmail email application is seen on a portable device in this photo illustration on December 6, 2017. (Photo by Jaap Arriens/NurPhoto via Getty Images)

Here are the most important things to know about Monday before you hit the door.

Monday marks the start of the busiest week of earnings season with more than 140 companies set to report, including AT&T, Apple, Facebook, Starbucks and Beyond Meat. So far, 199 companies have reported third-quarter earnings and 78% of them beat earnings per share estimates, according to Nick Raich, CEO of The Earnings Scout. However, adjusted earnings growth is down more than 14% on average from the third-quarter of last year.

2. Another earnings beat for Google?

Google’s parent company Alphabet reports third-quarter earnings after the bell on Monday. Aegis Capital Group is expecting the tech giant to report earnings of $11.88 per share, compared to the $13.06 per share they earned in the same quarter last year. The firm forecasts Q3 revenue of $40.3 billion, higher than the $33.7 billion earned in the same period of 2018.

Alphabet had its best day in four years in July after reporting second-quarter earnings that beat the Street. The tech giant saw strong growth in its cloud business Google cloud, which rivals Amazon Web Services and Microsoft Azure. The beat was despite recent investigations into the privacy practices of big technology companies. Aegis Capital said it is not worried about the long term implications of the crackdown on big tech.

“We expect the regulatory calls to intensify as we head deeper into the election cycle given the bi-partisan support, with more calls for breakups, big fines, and increased data privacy controls,” said Aegis’ Victor Anthony in a note to clients. “However, we do not anticipate any large-scale business model changes or breakups.” 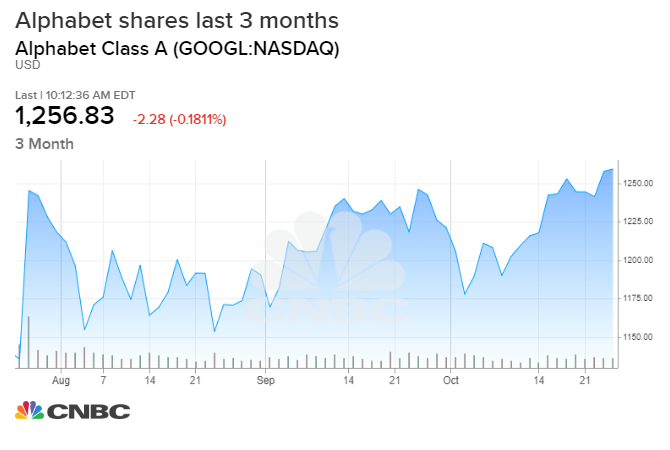 Shares of Alphabet are up more than 10% in the past three months.

One of the hottest IPOs of the year reports earnings on Monday. Bank of America Merrill Lynch is expecting Beyond Meat’s to report earnings of 6 cents per share, which would be the first time the alternative meat company turned a profit. Last quarter, Beyond Meat reported a net loss of $9.4 million, or 24 cents per share.

Bank of America’s estimates do not include potential new customers that are currently in or contemplating tests with Beyond Meat products, like Dunkin, Subway, 7-Eleven and McDonald’s in Canada.

“This suggests upside potential depending on timing of on-boarding customers,” said Bank of America food and beverage analyst Bryan Spillane.

Beyond Meat is up about 300% since its initial public offering in April.

AT&T (before the bell)

Walgreens Boots Alliance (before the bell)

Spotify (before the bell)

Restaurant Brands (before the bell)

PetMed Express (before the bell)

Occidental Petroleum (before the bell)

Alphabet (after the bell)

Beyond Meat (after the bell)

T-Mobile (after the bell)