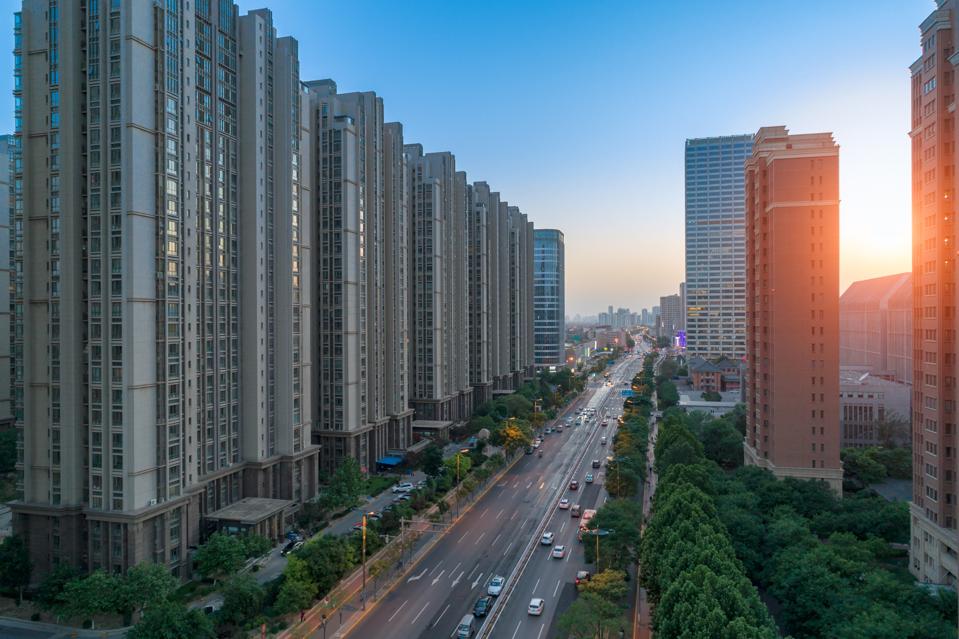 In 2005, when I first began living in China, rent was incredibly low—as in, $100 per month for a two bedroom apartment near Zhejiang University in Hangzhou. This wasn’t just due to the fact that everything was cheaper back then or a lack of adjusting for inflation, but relative to the general price points of other goods and services, rent in China was startlingly cheap. There was simply a lack of demand for rental properties and it would have been a stretch to even call the rental market nascent–it hardly even existed. While manual migrant workers were renting out bunks in dormitories and rooms in suburban villages, the movement of educated, white collar workers to China’s big cities had yet to shift into high gear, there was an absolute glut of new housing being brought onto the market, and the cost of purchasing a home was relatively affordable–not to mention the fact that there was an acute amount of social pressure to own a home and having to rent was almost pitiable.

Today, the housing scene in China is very different. With a sizable portion of the population priced out of the market in key areas as well as a population that has grown accustom to being geographically agile and moving from city to city for the best opportunities, renting has started to lose its taboo status—and there are even signs of it starting to be seen as modern, fiscally strategic, and perhaps even a little chic.

In many parts of China, the housing market has topped out and stabilized, the construction boom has been curbed, and there is a growing suspicion among the young generation that going into long-term debt to pay an overinflated price for a house that statistically will be ready to demolition around the same time they have it paid off may not be the best of life decisions. Renting is now a viable option for China’s younger generation and has become an industry that’s now set to boom.

When we discuss China’s real estate boom period (circa 2005-2016) we have to keep in mind that home ownership was still a relatively new phenomenon. In a rather under-appreciated economic revolution, China’s real estate market was reborn in 1998, when the central government began breaking up workers units and privatizing housing. During this period, people were suddenly given the right to sell or rent out their homes, and China obtained one of the highest rates of home ownership in the world. But, as with most things in China, there was a deeper story behind the numbers, as in this era people were basically given their homes for extremely low prices.

“For my parent’s generation, they don’t even think about renting,” Cody Chao, a 20-something medical student from Suzhou, explained. “Besides, housing wasn’t that much of a financial issue. I know my dad got the place that I’m at right now at a very reasonable price—like, a crazy cheap price.”

However, these new economic privileges–not to mention a building boom unlike anything the world has seen before–set the stage for China’s well documented real estate feeding frenzy of the early 2010s. New social expectations were put in motion: in order to be considered viable for marriage a young couple would need to be able to lay claim to their own home. This pressure meant that upwards of 30% of new home purchases in China were being carried out due to an impending marriage—or, as was so often the case, parents buying a home for their child’s future marriage. According to Mark Tanner, the director of the Shanghai-based consumer research firm China Skinny, around 90% of Chinese first-time home buyers are supported by their families.

“It’s like part of the wedding deal,” Chao explained. “You get a house and then you start your own family. Once you have a house, a decent car, an okay job, then we can sit down, get a latte at Starbucks, and see what you are as a person. It’s more of a trade rather than a romance.”

However, this “wedding trade” is now feeling the ripples of financial reality, as the cost of housing in China’s economic epicenters is making some people accept long-term renting as a viable option.

“Housing affordability versus salary in China is the most out of whack in the world,” Tanner pointed out, “and almost all salary earners would struggle to buy a house with their wages, which is making more young Chinese who want to stay in the big cities realize that they are unlikely to ever buy a house there. Some will buy a home in their home town, and rent in the big city.”

Property prices in China have become some of the most expensive in the world, having more than quadrupled since 2000. By early 2018, the average price-to-income ratio for a house in one of China’s top cities was a startling 34.9 years—meaning that it would take nearly 35 years of an average salary to pay for an average home. Even while China’s middle class continues to grow, the rising cost of housing has doubled that of disposable income. Compounding this issues is that not only are housing prices rising to unaffordable heights, but larger down payments are being required and mortgage interest rates are going up, making buying a home seem more and more like a far off dream for the average Chinese millennial.

Meanwhile, rent is still very affordable. For example, as of June 2018, the average monthly cost of a mortgage in China’s top cities was 16,000 yuan per month, while the average rent was less than half that at 7,000 yuan, according to a JLL report.

The rationale is now sinking in that for many of China’s younger generation buying a house prior to marriage may actually be fiscally irresponsible, and “nude weddings”—where neither party owns a home—are not only becoming more common but are starting to seem like a good idea.

“For any new family to buy property is impossible for someone who has just started their career. It’s just impossible,” Chao lamented. “Like, a house in Pudong will cost whatever I’m going to make for the rest of my life.”

To make matters even more difficult for China’s prospective young home buyers is that in most of China’s first- and second-tier cities there are strict home purchasing restrictions. These were originally designed to curb the ongoing mass migration to the country’s economic epicenters as well as to provide local governments with a more robust set of levers to control the housing market and stave off the very real possibility of bubbles and crashes. The impact on the ground is that if you’re from, say, Chengdu, and you move to Shanghai for work, you can’t just jump right in and buy a house like you can in the U.S. or Europe. You must first be able to show a lengthy (currently 5 years) work and tax paying record in the city before you are permitted to enter the housing market–regardless if you can afford it or not. Therefore, migrants to China’s top-tier cities must endure what amounts to an extended period of rental purgatory before they can even think about becoming a homeowner.

“If you look at a city like Shanghai, for example, of the 25 million population, just 11 million living there are Shanghainese, who own the vast majority of the residential real estate,” Tanner explained. “You’ve now got domestic migrants who have been living there 10+ years who have made their life there and are wanting to stay for both job opportunities and the general excitement of the cities.”

China currently has around 400 million millennials who are entering the country’s labor and housing markets with a different set of life experiences and outlooks than their parents and grandparents. China’s young generation, the first to grow up into a relatively prosperous country, also face a different set of fiscal realities than their predecessors.

“I grew up free of worry of being starved, of being cold, of being without a home,” Chao explained.

China’s young and educated generation is typically geographically mobile, many have studied or worked abroad, and have become comfortable living and working in a city far from where they grew up. Millennials make up 43% of China’s urban migrants, according to a Chinese government survey. These new migrants often grew up in urban areas, were educated in urban areas, and now want to seize the opportunities of some of China’s most prosperous cities, and are growing more and more comfortable with renting as they do so.

Another social factor that’s impacting China’s rental market is that the millennial generation is getting married and having children later in life. According to China’s National Bureau of Statistics, the average age for a couple to get married and have a child in 1991 was 23.7 and 24.2 years, respectively. Last year, the average age to marry was 27.8 years old and the average age to have a child was nearly 30. JLL found that this delay in family planning has delayed home purchases, with more young Chinese willing to rent for a far longer duration of time than their predecessors.

The rise of renting

Over 200 million people in China are now renting their homes, and this may just be the beginning of a sector that’s going to explode in the coming years. While China’s rental market is currently valued by Jones Lang LaSalle at more than one trillion yuan ($140 billion), renting still only makes up a mere 2% of the housing market.

The Chinese government is very aware of the economic potential and the social necessity of the rental market, and in 2017 launched a new initiative pragmatically dubbed “Focus on Both the Rental and Sales Housing Markets,” which set out to develop the country’s fledgling rental sector. A wave of policies were unleashed to build more rental properties and to provide incentives, such as tax breaks, for property owners who rent out their unused homes as well as renters themselves. Beijing, for example, announced in 2017 that a third of the new housing units that would come online over the next five years would solely be for renters. Meanwhile, in the eastern city of Wuxi, the local government decided to permit renters to apply for residency, which would give them access to the city’s education, health, and other social services—previously, they had to own a home of at least 60 square meters.

The stage is now set for China to create a dynamic rental market, and the country’s big companies have likewise responded. Tech giants like Alibaba, Tencent, and JD.com are making big investments in the rental sector, as are major real estate developers like Country Garden, Vanke, and Dalian Wanda. Apartment booking apps are also popping up and attracting large amounts of investment. Ziroom, for example, is China’s equivalent of Airbnb with a twist, as they predominately deal in long-term rentals. Last January, they brought in $621 million in financing, with backing from Tencent, Warburg Pincus, Sequoia Capital, and Sunac, and is now valued in the ballpark of $3 billion. By 2030, China’s rental market is expected to quadruple in value to 4.2 trillion yuan ($588 billion), as the country braces for a new economic sector to boom.

U.S. unemployment system still plagued by delays 3 years after pandemic-era downturn
Amazon, Google, Meta, Microsoft lay off thousands — but tech jobs are still hot in 2023, Indeed finds
$6.6 billion fintech Wise accused by rival of harming competition
Cramer’s week ahead: Fed decision on Wednesday could let the bulls ‘party on’
How A 529 Plan To Child IRA Conversion Can Turn Your Teen Into A Middle-Class Millionaire