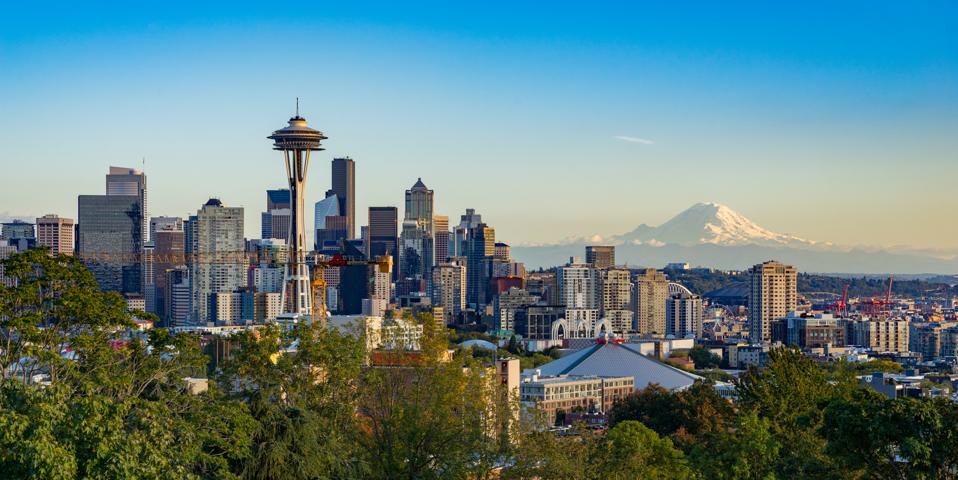 In Amazon.com’s fiercely competitive search for a second headquarters last year, Seattle—the company’s original home—turned out to be the true victor. The behemoth retailer’s decisions—first to split the promised 50,000-job bounty in two and then, in February, to scrap New York’s Long Island City altogether amid political backlash—left Seattle with the largest concentration of Amazon employees in the country.

The Emerald City, at this point, is accustomed to winning, with an economy that grew at three times the rate of the median U.S. city last year—8.4%, or 7% net of inflation. It’s home to not only Amazon but also to Boeing, Costco, Nordstrom and Starbucks. A strong regional tech scene also includes companies like Microsoft, Zillow, Expedia and Tableau Software.

Full List: The Best Places For Business And Careers

It is one of small handful of big cities that have seen more people move in than depart in recent years, and it has a healthy supply of highly educated young workers. A talented workforce is a big reason Seattle claims the top spot in Forbes’ list of the Best Places for Business and Careers for the second year in a row.

There are signs, however, that Seattle may be losing some of its advantage. The costs of living and doing business in the city are high, and home prices in particular have undergone among the swiftest growth in the country recently. Meanwhile, after years of above-average gains, income growth slowed big-time last year and pay is now increasing at a slower rate than the national average.

Full List: The Best Small Places For Business And Careers

Seattle’s growth can be “a double-edged sword,” explains Erica Ruder, a site selection expert at real estate firm Cushman & Wakefield. Yes, it’s good for a city to have a lot skilled workers, but many of them already have jobs, making access to talent a potential challenge going forward.

Forbes has tracked the business climates of the largest metro areas for 21 years. We compared the 200 largest metros this year on 14 metrics related to jobs, incomes and economic growth; business and living costs; and education levels (a ranking of smaller metros can be found here). Other factors included migration; culture and leisure opportunities; and workplace tolerance laws. The metros ranged in size from more than 14 million people (New York) to 268,000 (Hagerstown, Maryland). Data was provided by Moody’s Analytics, Sperling’s Best Places, U.S. Census, Cushman & Wakefield and the Movement Advancement Project (see here for more details on methodology, plus the best and worst performers on specific metrics).

The Best of the Rest

Dallas ranks second for the first time this year, ending Raleigh’s three-year streak, after coming in sixth in 2018. The Texas city has experienced a huge upswing since Forbes began publishing our annual Best Places study. It ranked in the bottom half of the 200 city list back in 2006 and 2007 but has marched higher most years since.

Economic and job growth in the city are expected to continue gaining in the near future thanks to a strong talent base. Ruder says many of her clients are drawn to Dallas in part for its central location and relatively low cost of living.