Apple reported fourth-quarter earnings that beat analyst expectations on Wednesday, thanks to strong performance in services and its fast-growing wearables business.

Although Apple’s iPhone’s business was down 9% year-over-year, the company signaled that it expected a big holiday quarter, and Apple stock rose over 1% in after-hours trading

Here’s how the company did compared with Refinitiv consensus estimates:

Investors were watching Apple’s guidance for its important holiday quarter, which was in line with analyst estimates. Apple is signaling that it expects growth over last year’s holiday quarter, where it was hit by a major downturn of iPhone sales in China.

It also suggests that Apple has a chance to beat the record $88.3 billion in revenue it posted in the quarter ending December 2017.

Apple CEO Tim Cook highlighted the strong holiday forecast in a statement. “We’re very optimistic about what the holiday quarter has in store,” Cook said.

He also signaled an optimistic note on the U.S.—China trade war that has affected Apple stock. “The tone around tariffs has changed significantly,” Cook said during an earnings call.

iPhone down, but nearly everything else up

However, it wasn’t all good news for Apple. iPhone sales were down 9% year-over-year, which Cook said was a major “improvement” over previous quarters which saw iPhone revenue drop as much as 15%.

“Outside of iPhone, we grew 17% year on year and underneath that, wearables were well over 50%, continuing the strong momentum of accelerating that’s driven by Apple Watch and AirPods,” Cook told CNBC’s Josh Lipton.

Wearables, including the popular AirPods earbuds, was the company’s fastest-growing segment, with revenues up 54% to $6.52 billion in the quarter. The company recently released a new more expensive version, the AirPods Pro, which could figure into the holiday quarter’s sales.

Cook said that Apple’s wearables business grew in every market around the world that it tracks. 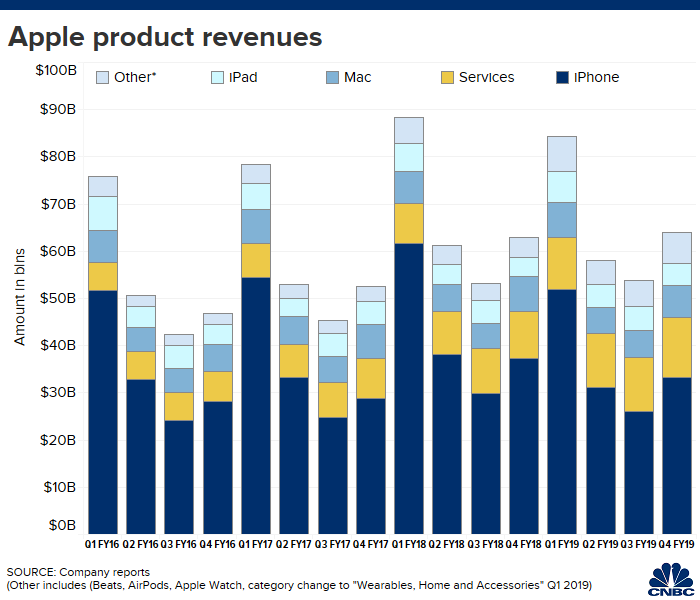 Most of Apple’s sales growth happened in the Americas, as sales in Europe, Japan and Greater China were all down slightly from last year’s quarter. 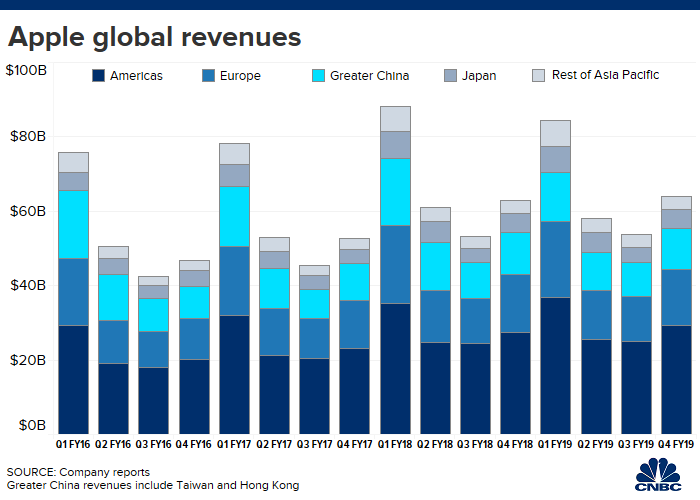 Apple’s total cash on hand was $205.9 billion, which was down 2.2% from the previous quarter as the company continues its aggressive buyback strategy. Apple said that it spent $18 billion on share buybacks and $3.5 billion in dividends during the quarter. Apple also said it would give people using its branded credit card, Apple Card, no-interest financing on new iPhones. 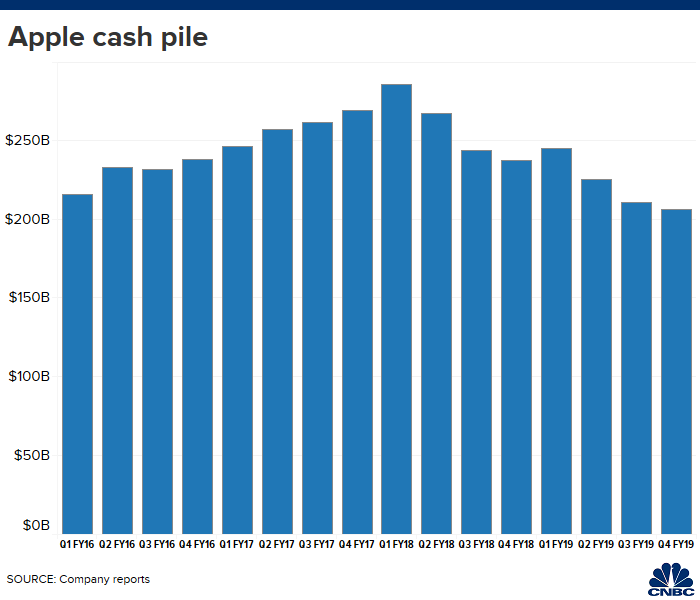 ‘Avatar: The Way of Water’ is the third James Cameron movie to gross $2 billion
Be Aware Now: Here’s Where SECURE 2.0 May Hand You Unexpected Benefits
China looks past Covid as tourist bookings surge for the Lunar New Year
Tesla reports record revenue and beats on earnings
Tax Cheats, Dodgers, Avoiders, And Evaders