Biotechnology stocks are emerging as the standout performers in October. 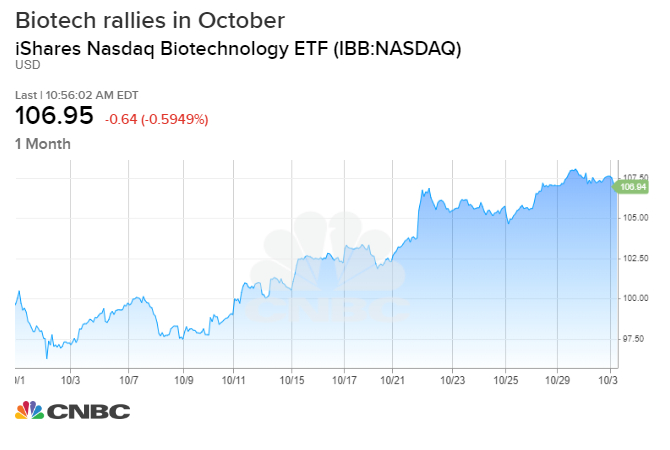 Leading the way are large-cap biotechnology companies Amgen and Celgene, which are up about 8% in October, and Biogen, which is up nearly 30% in October.

Last week, Biogen’s stock soared after the drugmaker announced it was seeking regulatory approval for an Alzheimer’s drug, aducanumab. The announcement came just months after Biogen discontinued clinical studies of the same drug following a data analysis that it did not achieve its objective. However, new data showed the drug reduced the clinical decline in patients with Alzheimer’s, the company said. Biogen has a market value of about $54 billion.

Vertex Pharmaceuticals is also boosting sentiment in the sector after it received approval for its cystic fibrosis drug five months earlier than expected. Vertex’s stock is up over 17% in October.

Reata Pharma is up more than 154% in October, on pace for its best month ever back to its initial public offering in May 2016. Achillion, Aclaris and Ra Pharmaceuticals are other standout performers this month.

It is important to note the Biotech ETF is up about 11% this year, lagging the broader market.