MACON, Ga. — At 5:01 a.m. on Thursday October 24, Dr. Wayne Johnson, who was hired by the Trump administration to oversee the country’s $1.6 trillion in student loan debt and its 44 million borrowers, submitted his resignation letter to Education Secretary Betsy DeVos. Around an hour later, Johnson made an announcement that hurled him into headlines.

Most of the student debt he’d managed, he said, should be cancelled.

“By 7 a.m. requests started pouring in from around the country for interviews,” said Johnson, 67, during an exclusive interview with CNBC on Sunday night at a gated retirement community he owns in Macon, Georgia.

Before long, CBS, NBC, CNBC, MSNBC and Fox News had all booked news segments with Johnson, who is now seeking to fill an open Senate seat in Georgia.

There’s interest, of course, in why the government official in charge of federal student loan debt has come to the conclusion that it shouldn’t exist. But there’s another reason behind the fascination with Johnson.

He’s not a Democrat.

Wayne Johnson at the Gables of Wolf Creek, the retirement community he owns in Macon, Georgia

Before Johnson’s announcement, it was only the most progressive Democrats — presidential candidates Bernie Sanders and Elizabeth Warren — calling for the cancellation of student debt.

Conversations around student debt cancellation usually grab a lot of attention, said Julie Margetta Morgan, a fellow at the liberal Roosevelt Institute.”To have a Republican talking about it pushed it over the top,” she said.

Republicans mostly have slammed the idea of a debt jubilee, saying it will punish taxpayers and promote fiscal irresponsibility. While 80% of Democrats are in support of the government forgiving $50,000 in student debt for people who earn less than $250,000 a year, just 30% of Republicans support such an idea, according to a Quinnipiac University poll.

A few days before Johnson resigned, DeVos described Warren and Sanders’ proposals as “crazy” in an interview on Fox News.

“Let’s look at this for what it really is: A federal takeover of higher education,” DeVos said.

US Secretary of Education Betsy DeVos

When Johnson saw DeVos’ comments on Fox News, he winced. “I was fully expecting that somebody was going to say, ‘This is what she said. This is what he said.'”

Still, Johnson insists his vision for higher education is shaped by Republican values and is a far cry from the progressive Democrats’ plans to make public colleges tuition- and debt-free. He called those ideas, “basically socialism.”

“What I bring to it is more of a sound, conservative, Georgian business-mind approach,” Johnson said. Before DeVos hired Johnson in 2017, he had worked for decades in the consumer financial services industry, including stints as an executive at Visa and CEO of a student loan refinancing company. Even though it was a Sunday night, he wore a black suit and tomato-red tie. He didn’t know when the next camera crew would appear.

The student loan crisis, in Johnson’s view, is evidence that the U.S. Department of Education has failed as a lender. It’s because of its errors that he believes it should cancel much of the debt. “We made the mess, we need to fix it,” he said.

Outstanding education debt has outpaced credit card and auto debt. The average college graduate leaves school $30,000 in the red today, up from $10,000 in the 1990s. Every day, 3,000 borrowers go into default. Johnson calls the current system, “absolutely unsustainable.”

“If you’re in an insane situation, it’s only going to become more insane,” he said. 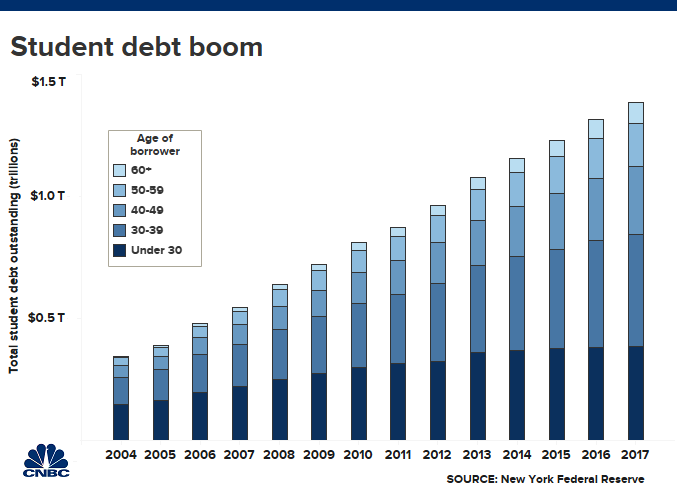 Johnson proposes to forgive $50,000 in student debt for all borrowers, which would reset the balances of some 37 million borrowers back to zero. The plan would be paid for with a 1% tax on revenue generated from corporations and non-profit organizations, Johnson said.

Johnson also hopes to widen the appeal of his proposal by offering any college graduate who didn’t borrow student loans, or had already paid off their debt, a $50,000 tax credit.

It’s Johnson’s vision for what will happen after the debt forgiveness where he most aligns with his party. He wants to do away with federal loans altogether. “That’s where the Republican in me comes to light,” Johnson said.

In a 2016 report outlining the Republican agenda, it reads: “The federal government should not be in the business of originating student loans.” It also says the “private sector participation in student financing should be restored.”

To fill the void of federal student loans, Johnson proposes to give every high school graduate a $50,000 education “voucher” that they can apply to a college or a vocational program. He would maintain Pell Grants, which typically go to students from families with an income below $20,000, and add other grants, too.

Other funding sources for students, he said, could include private lenders and income-sharing agreements, in which investors provide students money to pay for college in return for a share of their future income.

Margetta Morgan, at the Roosevelt Institute, said she was concerned Johnson was using the problems of the federal government to try to enrich private companies. “He got it right on student debt cancellation, but wrong on everything else,” she said.

Critics of Johnson’s plan also point out that many of the challenges to the federal student loan system actually stem from private companies, including the for-profit colleges with poor student outcomes and the student loan servicers like Navient, which is currently being sued by a number of states for misleading borrowers.

And while the student loan forgiveness proposals from Democrats aim to make the country’s higher education system less reliant on debt, Johnson’s plan seems to just exchange one kind of debt for another, Margetta Morgan said.

“Private sector lending has been far worse and far more expensive for borrowers,” she said.

However, with Johnson’s proposed grants, most students should be able to cover their college costs without borrowing, Kantrowitz said. Although, he admitted: “If you want a higher-cost college education, you’ll have to pay for it yourself.”

Julie Morgetta Morgan, a fellow at the Roosevelt Institute

Despite the different visions for student debt forgiveness by Johnson and Democrats, the fact that members of both parties are behind the platform will help it gain traction, experts say.

“I dont endorse his ideas for the future,” Morgetta Morgan said. “But we should not discount that this is an official who was intimately involved in the student loan system and is saying, ‘It’s not working.'”

Asked how he’s going to make his case for debt cancellation to those on the right, Johnson said it was simple.

“You say, ‘I’m a Republican,” he said, clenching his fist, as if it were a gavel, and striking the table, “‘and I’d like to tell you some truth.'”

More from Personal Finance:
Americans are spending more, but are still not saving
Here’s how long it takes to improve your credit score
The 30% rule of thumb about credit card use could cost you