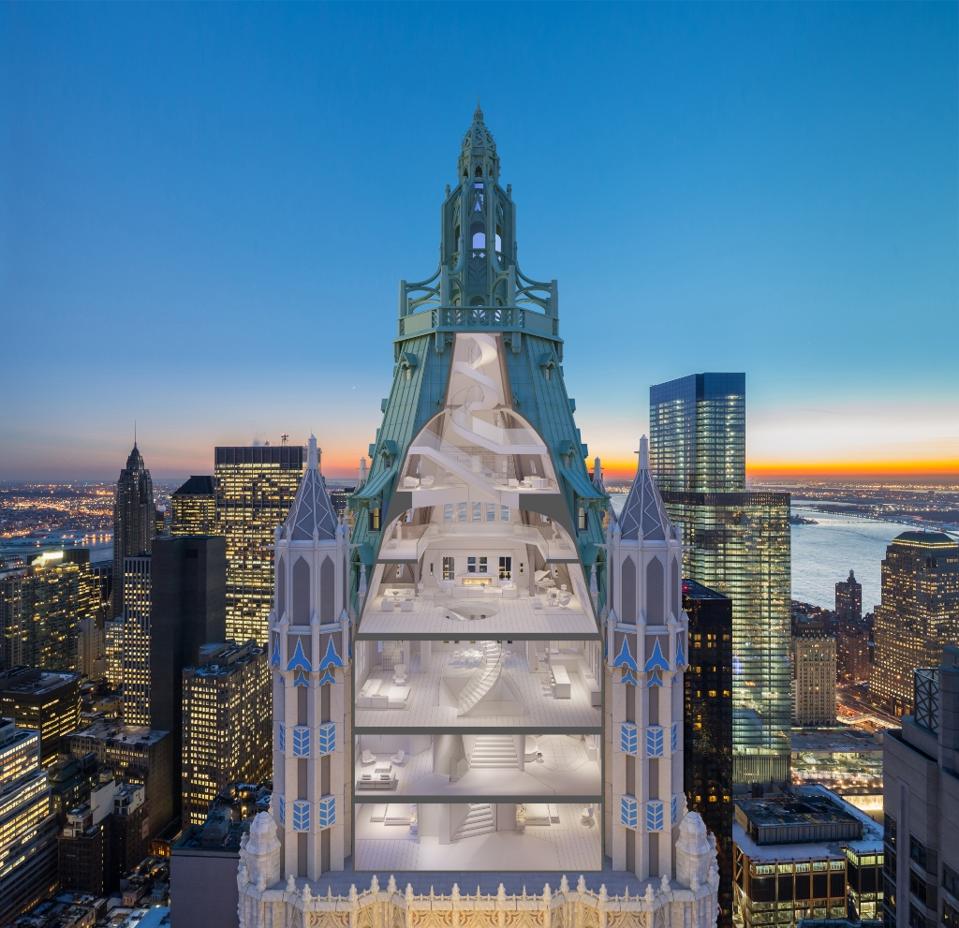 After sitting on the market for several years, “The Pinnacle” penthouse at the top of New York City’s famed Woolworth Building is relisted with its first furnished renderings and a lower price.

Originally listed for $110 million in 2017, the property, which spans the top five floors of the tower, is now priced at $79 million.

Though the home is offered as a fully-unfurnished “white-box” unit, developer Alchemy Properties hired award-winning architect David Hotson to create renderings of its interiors. Since the unit has a cylindrical layout, the new photos aim to help potential buyers envision living in the uniquely-shaped space.

Hotson is known for designing the Skyhouse penthouse at 150 Nassau St., which was awarded “Best Apartment of the Decade” by Interior Design magazine in 2015

Commissioned by F.W. Woolworth and designed by Cass Gilbert, the 58-story Woolworth Building was the tallest structure in the world when it was completed in 1913.  Alchemy Properties, together with French architect Thierry W. Despont, renovated 106-year-old landmark’s tower into 32 condos, which have a starting price of $2.85 million.

Sales for the condos are being handled by Alchemy Properties, and Stan Ponte and Joshua Judge of Sotheby’s International Realty.

The 9,680-square-foot penthouse, which occupies floors 50 through 55, features a private 408-square-foot observatory on the 58th level, along with exclusive elevator access, 24-foot ceilings and more than 125 windows.

“The Pinnacle at The Woolworth Tower Residences has been described by some as a ‘castle in the sky’ and by others as the ‘highest mansion in Manhattan,’” Ponte and Judge said in a statement.

“However a buyer may think of the space, it is ultimately a home, and the renderings and proposed design by award-winning architect David Hotson allows potential purchasers to understand how they could live in this penthouse of penthouses,” they said. “In particular, David Hotson’s brilliant use of vertical sight-lines, floor plans that maximize light and air, breathtaking floating staircases and internal elevators have literally ‘elevated’ the space from a landmark penthouse to a piece of art.”

Amenities in the building include a lounge and entertaining area, a wine cellar and tasting room, a gym, and a 50-foot saltwater pool.

On the ground floor, the original coffered ceiling from Woolworth’s personal office on the 40th floor was restored and relocated to the condo’s private lobby at the 2 Park Place entrance. To bring the ceiling back to its original grandeur, Alchemy Properties brought in artisans from Canada, who cleaned each coffer with a cocktail of baby shampoo and seaweed, while reinforcing their backings with Kevlar.

McDonald’s is about to report earnings. Here’s what to expect
Carmakers face a crossroads as they work to fit auto dealers into their EV plans
Bright lights and snazzy mannequins: Walmart rolls out sleek new store designs
Intel shares drop on weak quarterly results and expectations for another quarter of losses
OECD Sets The Stage For Two-Pillar Tax Reform Revenue Estimates