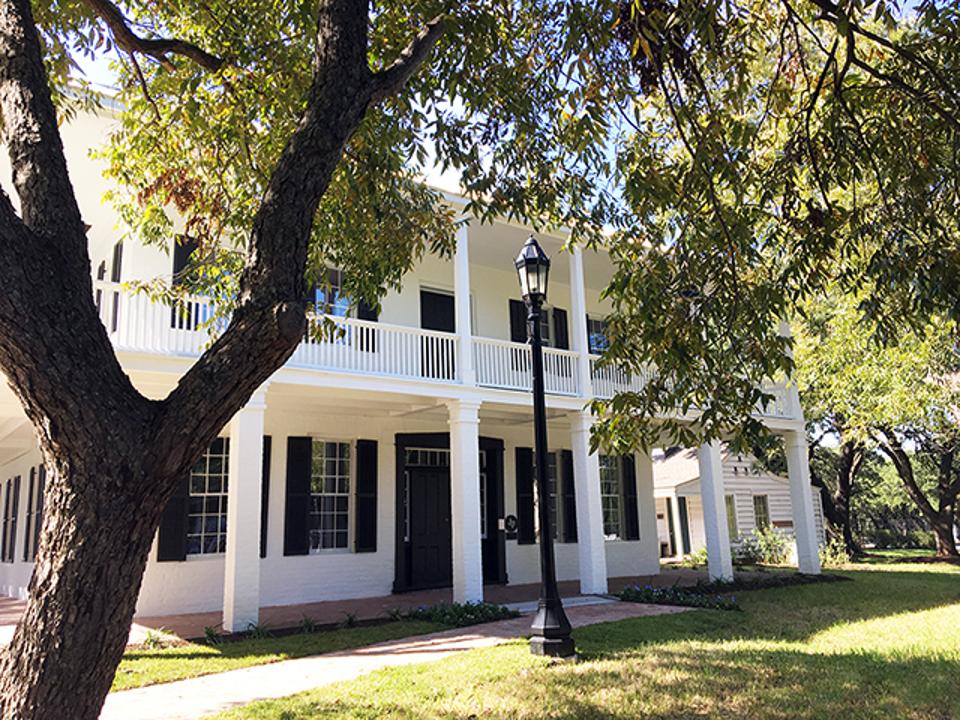 On the edge of downtown Houston’s modern business district, the city’s oldest building is reopening following an estimated $1.8M in preservation and restoration work affecting much of the historic home. With more to come.

The Kellum-Noble House dates back to 1847 – about a decade after the bayou city’s founding in the Republic of Texas – and occupies its original site.

Built with and on bricks made of mud from nearby Buffalo Bayou, the two-story home with wraparound porches on both levels is listed in the National Register of Historic Places and is a City Protected Landmark and a recorded Texas historic landmark.

Its location is within Sam Houston Park, a public park founded in 1899 that anchors downtown’s west side. Expanded to 20 acres over time and trisected by roadways, the fenced park grounds are home to nine other residences more than a century old. In the path of demolition as the city grew, the vintage housing was relocated from neighborhoods around the city in the second half of the 20th c. by The Heritage Society. THS, a nonprofit organization, stewards the park’s collection and a small historical museum.

In Houston, where awareness and appreciation of city history hasn’t been a priority – especially where real estate is involved — the survival of Kellum-Noble is notable, local heritage advocates said.

The historic home was last open to the public in early 2014, when it closed to prepare for an extensive, multi-phased restoration project.

Phases I and II, recently completed, stabilized the original foundation in a painstaking process affecting piers, joists, footings and previous efforts to shore up the home; improved site drainage; replaced the roof; and repaired interior plaster work within the 3,470-square-foot, seven-room building.

During the work, which required removing and numbering floorboards, artifacts found in the dirt below sub-flooring prompted a two-month archeological effort by Houston Archeological Society and the Texas Historical Commission, with thousands of items extracted – from marbles and buttons to porcelain dishware and an intact inkwell.

Phase III, slated for 2020 and estimated at $650,000 in THS materials, targets rebuilding the exterior stairs and second-floor porch decking and re-restoring the exterior columns, last addressed in a ‘50s renovation.

Total restoration weighs in at about $2.5 million, including in-kind contributions, THS sources estimated.

“The reopening of this house offers an extremely rare look at the city’s history in a tangible way,” said Ginger Berni, THS collections curator.

Given its location on land that dates back to the city’s founding and thus prior to statehood, the property has been a witness to not only early Houston – and Texas history – but also the growth of downtown, evolution of the parks and schools systems, and even preservation efforts, she said.

The site’s original eight acres were purchased in 1837 from the city founders. Ownership flipped several times before 1844, when it was purchased for $500 by the property’s tenant, Nathaniel Kellum, according to THS materials. He established and operated a brickyard on his land as well as lime vats (for mortar), an iron foundry, saw mill and tannery. The home’s brick exterior and columns came from his operations.

Then (and now), industry in Houston is a fundamental fact of life, “and consequently is often the reason we tear down our historic buildings,” Berni said in a follow-up statement.

Over time, the Kellum-Noble house and grounds were used as an early school – by owner Zerviah Noble and daughter Catherine, a park keeper’s home, an early city zoo, and parks department offices.

“Now it is the cornerstone of The Heritage Society’s 65-year effort to preserve and share Houston’s history,” Berni said. “The biggest challenge is support – both monetarily and simply believing that saving our history is a worthy cause.”

Tours of the freshly-painted historic home (and a peek at some of what was unearthed) resume in mid-November.

Chewy’s push into pet telehealth runs into regulatory hurdles, skeptical veterinarians
Biden administration plans to end Covid public health emergency on May 11
A Luxury Lodge Beckons Along The Unspoiled New Zealand Coastline
How Zelle is different from Venmo, PayPal and CashApp
Roughly 70% of taxpayers are eligible for IRS Free File, but only 2% used it in 2022