“The weather’s been ferocious,” said Elizabeth Ryan, the owner of Stone Ridge Orchard. “We’re fighting for our lives in this moment of climate change.”

STONE RIDGE, N.Y. — Elizabeth Ryan was standing among her ruined Golden Supreme apple trees, recalling how they were snapped and toppled by Hurricane Sandy and debating if she should finally replace the remains with plums or grapes.

“I tried to salvage and restake my trees, but they never recovered. It was $300,000 in losses,” she said, examining a dead branch.

Climate change is posing an existential threat to the precarious lives of farmers across the country. More intense and frequent weather disasters are wiping out entire harvests, and warmer winters are exposing crops to severe frost damage.

For apples, a warm spell in the winter will force trees to flower prematurely and expose the buds to unpredictable winter frosts, hail and other extreme weather. In some cases, entire trees can become stressed and die.

Experienced fruit-growers like Ryan are experimenting with more resilient crops, growing tactics and technology to cope with warmer winters and unprecedented heat, rain and drought. But climate change has become an impossible financial burden for many farmers.

“It’s daunting. But we soldier on,” Ryan said. “We’re fighting for our lives in this moment of climate change.”

The Hudson Valley has a long and robust history of apple growing. New York is the second largest apple producer in the U.S, and about 22% of the state’s annual apple production is derived from the Valley. But the apple-lush region is under serious pressure. In the past 50 years, the Valley has experienced a 71% increase in heavy rains, with unpredictable downpours and flooding.

Ryan, who operates several orchards in the Hudson Valley, has experienced three major crop losses due to bad weather in the last decade.

In 2012, apples in New York bloomed about a month earlier than usual when temperatures rose up to 70 degrees in February and then dropped back down. Half of the state’s apple crop was destroyed and farmers endured millions of dollars in losses.

It’s a significant economic problem, as apple production in the Northeast U.S. is valued at more than $400 million.

Unless farmers can find ways to grow more resilient apple varieties, or implement technology to combat severe weather, scientists warn that fruit-growing regions in the U.S. will continue to be ravaged.

But for some struggling farmers, adapting to climate change and rising property values has become too too difficult for some New York fruit growers. Between 2012 and 2017, more than 2,000 farms closed in the state, representing a 6% drop in the number of farms statewide, according to the New York Farm Bureau.

“A lot of farms in the Hudson Valley are being sold and built into housing developments,” Ryan said, walking along her row of ripe Asian pears and plucking a couple to store in her hat.

Since 1982, real estate development has eaten away over 471,000 acres of the state’s farmland, according to data from the preservation group American Farmland Trust.

“I’ve never known any farmer to just sell out,” Ryan said. “But after years of back-to-back crop losses, they can’t continue.”

Lack of winter chilling and early bloom in the spring might seem like obvious problems, but climate change also poses a slew of other hardships for apple-growers. For instance, warmer nights lead to the spread of pests and other diseases, and hot days in the winter sunburn the apple’s plant tissue.

Warming temperatures also cause significant defects and pigment damage to developed fruit, making it impossible for growers to sell them on the market. If the nights don’t cool down enough, an apple that is supposed to turn red will turn brown or pink instead.

Some farmers are turning to technology to protect against disasters, including irrigation systems for periods of drought, netting to protect against hail storms and giant wind machines that blow warm air onto the crops during cold spells to protect them from frost damage.

The wind machines, which are large propane-powered fans with two 12-foot blades, mix rising warmer air with colder air closer to the ground. The fans raise the air temperatures around the apple trees by a few degrees, but aren’t always effective under extreme cold or windy conditions, functioning best between −4 and 104 degrees Fahrenheit.

The machines exploded in popularity after the 2012 frost devastated apple harvests in New York. Researchers at Cornell University estimated that number of wind machines in the state likely doubled between 2012 and 2013, and have since helped farmers protect their crops from frost damage.

However, wind machines are expensive, and mostly used by larger-scale growers who can afford high-tech alternatives, according to Gregory Peck, a professor of horticulture at Cornell University. The machines can cost up to $10,000, and only cover roughly 10 acres.

“The costs add up,” Peck said. “It’s a thousand here, a thousand there, and suddenly orchards are costing twice as much as they did to install.”

In the Northeast U.S., a few apple growers have some irrigation equipment, but researchers say that most haven’t invested in enough equipment to optimize protections against periods of unexpected drought. 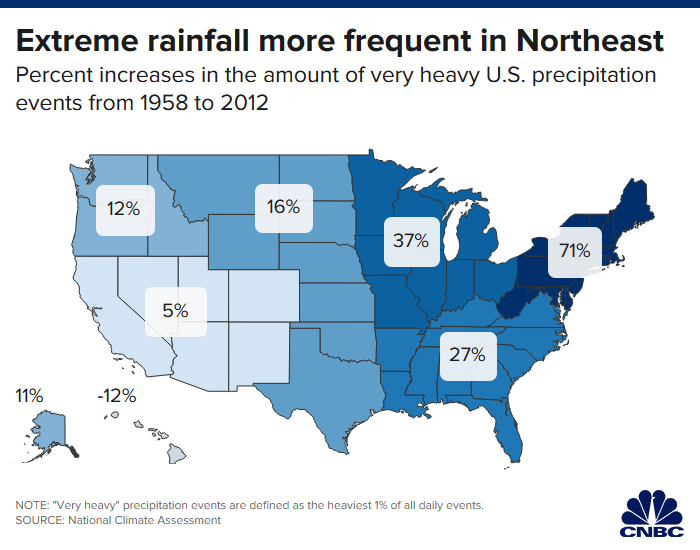 Adaptation is a gradual, decades-long process for most fruit-growers, whether they are turning to technology or changing the types of crops they are growing.

While Ryan hopes to eventually install wind machines for her orchard, her focus now is on how to replace less resilient apple varietals with different types that bloom later in the season and have roots that can withstand heavy wind, rain and drought conditions.

In addition to planting larger, stronger trees, she’s harvesting weeds, baking pies and making hard cider from the apples that are hail damaged or dinged up. Ryan uses weeds like dandelion, purslane and chickweed for salad mixes, and sumac rose hips and wind grapes for hard ciders.

Like other farmers that are diversifying and trying to stay profitable, Ryan wakes up at 3:00 a.m. on some mornings to drive down to the Union Square Green Market in Manhattan to sell her cider, apples and baked goods. Those markets are often a lifesaver for farmers, she said.

“I would be out of business without the farmers markets,” she said. “My farm would be a housing development. Period.”

Ryan said she often feels like she’s running out of ideas for diversifying, and no longer expects a full harvest every year. Yet she remains optimistic.

“We’re still in the game and we’re gonna fight like hell,” she said.

Consumers could soon feel the pain

The ramifications of climate change on the entire food system will be immense. But the problem is not yet obvious for most U.S. consumers, in part because a destroyed harvest in one region of the country could be masked by a better harvest in another.

“Farmers carry most of the risk, and get less of the returns,” Peck said. “It’s not just about the cost to farmers. Climate change is pervasive, and the negative impacts on all crops is so fundamental to our existence.”

Despite the rising costs for farmers, food prices for consumers won’t increase at the same rate, according to researchers. For instance, shoppers at the grocery store won’t necessarily see any price increases for apples right now.

A food system where lower prices still dominate can create a near-impossible cost scenario for growers, Peck said. Eventually, however, the higher cost of production will translate to a higher price tag for shoppers.

“The reality is that we can lose our whole crop in the Northeast and we don’t see a change in pricing because there’s so much stuff that comes from somewhere else,” Ryan said. “But I don’t believe that will continue indefinitely.”

Ryan circled back to her damaged trees, which paled in comparison to the large row of Empire apples just across the pathway.

“It just goes to show how long it takes to recover from a hurricane,” she said, repeating her intentions to replace the entire row with new, entirely different fruit.

Stocks making the biggest moves after hours: Microsoft, Texas Instruments, Capital One & more
A Standout Estate Asks $13 Million In Quebec’s Prestigious Westmount
House GOP study group is proposing changes to Medicare. Here’s what you need to know
As hit film ‘Everything Everywhere All At Once’ racks up Oscar nods, here’s what really happens in an IRS audit, according to tax pros
South Florida’s Trump Group Just Reset The Global Bar For Luxury Real Estate—Again