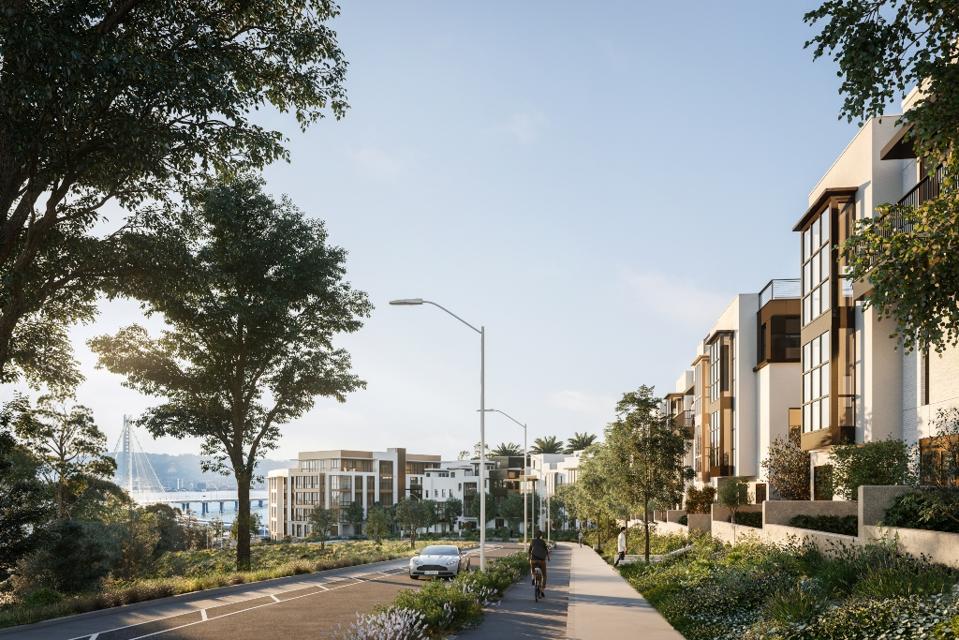 After two decades of planning, the first renderings of the condo complex coming to San Francisco’s Yerba Buena Island have finally been released to the public.

The community being constructed on the naturally-formed landmass will feature 266 condos, including apartments, single-family houses and townhouses, surrounded by 72 acres of park space, five miles of trails and a beach. Sales are expected to launch in early 2020, with move-ins slated for 2021. Prices are not yet available, though 14 of the units are set aside for below market-rate housing.

The project is being developed by Stockbridge Capital Group and Wilson Meany, with Hart Howerton and BDE Architecture Inc. on its design team, among others. CMG Landscape Architecture and Hood Design Studio are handling the exteriors.

“Yerba Buena Island is a unique place – a spectacular wooded island in the middle of the San Francisco Bay,” Chris Meany, partner at Wilson Meany, said. The condos will offer luxurious sizes with a minimal environmental footprint and, he added, “one of the best views in the world.”

Despite being just a mile from downtown San Francisco, Yerba Buena residents will still be rather isolated, as aside from the complex, the remaining 75% of the island will be left as permanent open space. For shops and restaurants, they’ll need head downtown or to the neighboring Treasure Island, which is projected to have 140,000 square feet of retail and commercial space.

The buildings are being designed to blend with the topography of the island, designers involved in the project said. They’ll be strategically placed among the hills and trees, but will still offer panoramic views of the bay, the Golden Gate Bridge and the city. They will also feature a modern take on the classic bay window.

“Our goal was not to embrace a design style but to celebrate a lifestyle, [by] creating a place … that connects you to the stunning scenery of the bay from the unique vantage point of an Island,” said Tim Slattery, a principal at Hart Howerton. “Our idea was to reconnect to nature, the water, the climate, the view-from your own personal terrace in a completely intimate sensory experiential way, unlike any other offerings in the city.”

In addition to the residences and the plethora of outdoorsy activities, the development on Yerba Buena Island will also include a 14,000-square-foot private amenity building dubbed The Island Club, which has been designed to resemble an oak tree house. The club will include a gym and spa, a bar, a game room and an outdoor pool.

“The focus of the Yerba Buena Island Clubhouse is two-fold: on one-hand it nourishes the act of gathering, a place where the community can come together to break bread, enjoy a drink while also relishing in the remarkable panoramic Bay Area vistas,” said Joshua Aidlin, partner at Aidlin Darlin, the architect and interior designer for the clubhouse. “On the other-hand it is an environment intent on replenishing the soul, through exercise, swimming, yoga, and its direct connection to the surrounding hiking trails.”

FDA proposal would allow gay men in monogamous relationships to donate blood
Know The Times When An IRA Conversion Is Most Likely To Pay Off
The first ETF is 30 years old this week. It launched a revolution in low-cost investing
Walmart-owned Sam’s Club plans to open about 30 new stores over next five years
Top Wall Street analysts pick these stocks to climb 2023’s wall of worry