“You are what your record says you are,” said former football coach Bill Parcells, offering a no-excuses maxim of accountability tied to tangible results.

So, what does the stock market’s recent rally to a new record say that it is?

Has this simply been a relief rebound following a late-summer recession scare — one that’s simply lifted the upper end of a long trading range?

Or have stocks embarked on a new leg to this bull market following a successful “soft landing” for the global economy and a temporary lull in corporate-profit growth?

The weight of the evidence points in the more positive direction, based on the global scope of the rally, the cyclical sectors leading the way and the rapid repricing of bonds that have yields emerging from historic depths toward more normal but still unthreatening levels.

In the short term, the market looks a bit stretched and trader sentiment has turned aggressively bullish, setting the indexes up for some kind of pause or pullback. But the first notable dip from here would not likely be too damaging or lasting, given current valuation, seasonal trends and Federal reserve posture.

The push to a new record high by the S&P 500 has won the respect of technical traders by nosing above a trend line that had contained all the brief rallies to fresh highs since January 2018. 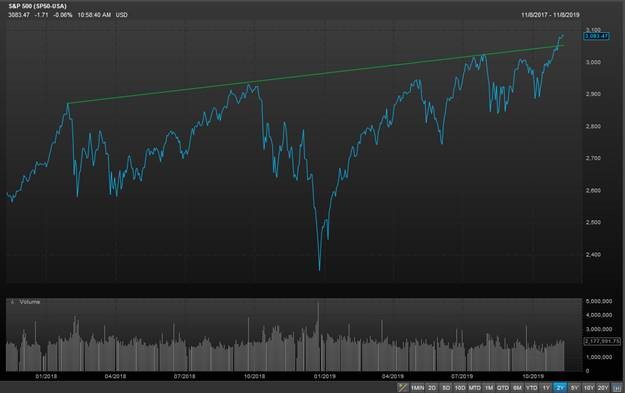 The performance suggests a pretty positive story animating the market: The trade war contributed to a global industrial slowdown in summer that compressed bond yields, forced the Fed into three rate cuts and inflamed recession fears.

But the equity market bent without breaking, leaning on defensive and dividend stocks to preserve a long-term uptrend until the data firmed up and the Fed signaled its adjustment was over. This revived risk appetites from severely depressed levels came just in time for the best seasonal period of the year.

Value stocks and cyclical plays have led the way, with semiconductors making new highs, financials on a roll and industrials asserting themselves. This “risk-on” move has been global too, with non-U.S. stocks outperforming the S&P 500 since the market lows of August.

Is the stock market overbought?

The last three weeks have shown impressive urgency by buyers, as investors rush to raise equity allocations from cautious levels. Technical strategist Frank Cappelleri at Instinet notes, “The recent price action has been the most persistent upswing all year” based on intraday supply-demand indicators. He compares the recent run to the resolutely steady uptrend seen in 2017, a year when the market was in a new advance following a long sideways period and a growth scare.

Yet the market still has a bit to prove here. At last week’s best level of 3097, the S&P was about 2.3% above its prior peak from late July. Each rally to a new record since January 2018 has been brief and none has pushed even as much as 3% above the prior high before retreating.

And the same relentlessness of the rally has made the market look a bit overbought — simply meaning it is a bit stretched above its longer-term trend, as this chart from Bespoke Investment Group shows.

Trader sentiment could stand to cool off as well, with options traders showing extreme appetite for speculative upside plays and little interest in downside hedges. Investor surveys likewise have brightened, as individuals “mark their opinions to market” following the strong rally.

These are short-term headwinds, solvable by either a stalling-out of the advance or perhaps a sharp pullback. Yet it would probably take a re-escalation of trade tensions or disturbance in the credit markets to cut too deeply into the market’s hefty year-to-date gains.

A key part of the market story has been the radical revaluation of bonds. The 10-year Treasury yield popped to 1.9% last week, a more than three-month high, as investors price out any more Fed rate cuts and reposition for a global growth pickup and even the flickering of higher inflation readings.

While the velocity of the yield surge could prove destabilizing if it were to continue, that’s not terribly likely. And in terms of absolute levels, yields are in something of a sweet spot: Not too low to suggest imminent recession risk, not high enough to pinch equity valuations or loan demand too much. And now the Treasury yield curve is no longer “inverted” but is back in its more comfortable state, with yields rising as the bond maturities get longer.

At almost 17.5, the S&P 500’s forward price/earnings multiple is at its highest level of the entire decade, outside of late-2017 and early-2018 periods when the market was pricing in the massive earnings boost from a tax cut that was not yet in the analysts’ forecasts.

Still, compared to high-grade corporate debt, stocks don’t look particularly rich. FundStrat shows the spread between the earnings yield of the S&P 500 (the inverse of the forward P/E) relative to investment-grade bonds, which implies a bit of a cushion under stocks for now. 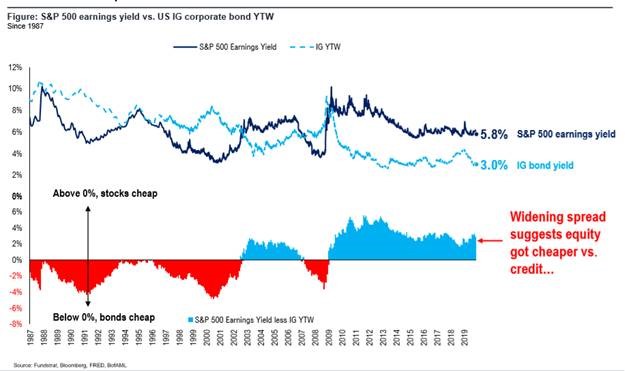 So far, all that it’s taken for stocks to reach a new high is for investors to gain comfort that what has been about a 2% growth U.S. economy, remains one.

At some level, should the rally carry a bit higher and valuations expand more, the same realization that this is about a 2% economy might become a disappointment and an excuse to sell rather than a relief and a prompt to buy. But it seems we’re not there yet.

Avoid Insider Trading By Selling Stock With A Rule 10b5-1 Plan
‘The IRS is not the boogeyman.’ Here’s what to do if you still can’t pay your taxes
Pension fund panic led to Bank of England’s emergency intervention: Here’s what you need to know
Villa Plays To The Water Views In The Stockholm Archipelago
Biden administration proposes new rules to increase airline fee disclosures