Whether a recession is on the horizon or not is anyone’s guess.

However, according to the latest CNBC Invest in You survey, two-thirds of respondents think one is coming. Especially if they’re Democrats or younger people.

With just one year out to the next presidential election, CNBC Invest in You and Survey Monkey polled 2,776 adults about the state of their finances, opinions about candidates and how they might affect the economy. The survey, with a margin of error of plus or minus 3 percentage points, was conducted Oct. 20 through Oct. 25. 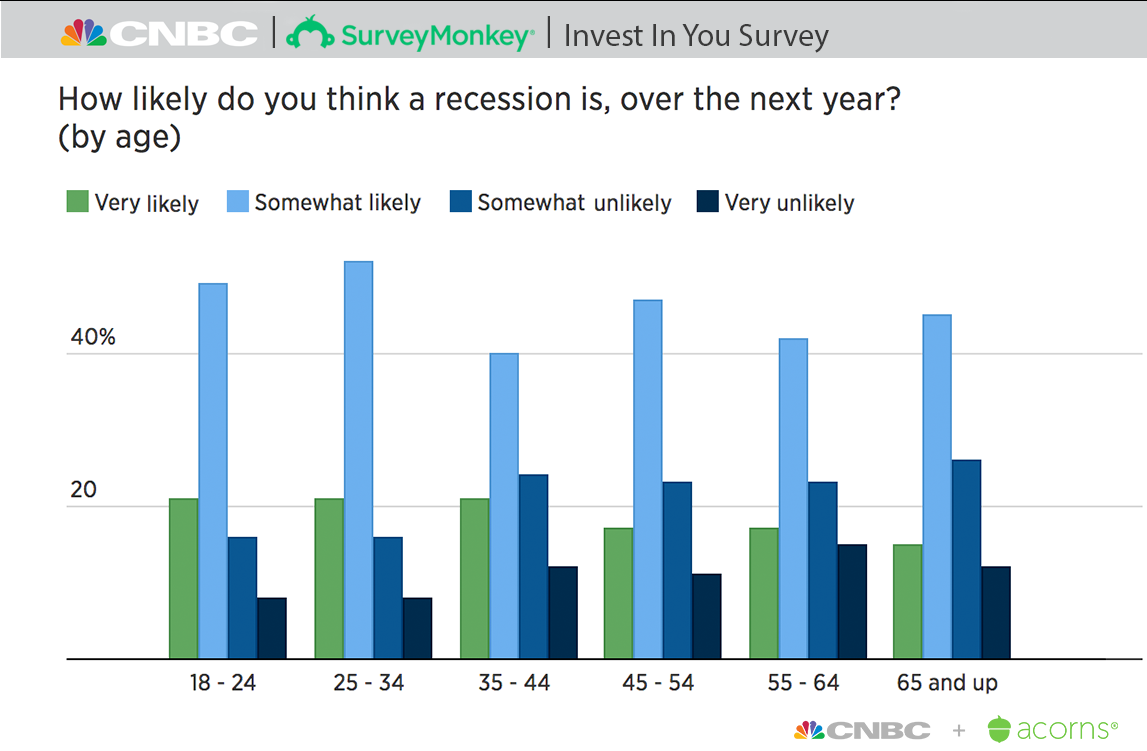 More than two-thirds of respondents said they believe the economy is going to weaken going into 2020. People who identify themselves as Republican are far less likely to agree, with 46% saying a recession is coming, compared with 84% of Democrats.

Right now, the economy is strong, giving President Donald Trump a healthy push going into next year’s election. Whether or not voters weigh the state of the economy in their decision, it’s no surprise people are trying to assess the odds of a recession.

When? How low? Those are the big questions for Americans who want to know when the stock market is going to shrink.

And when they say “market drop” they mean “recession.”

But first, what is a recession? 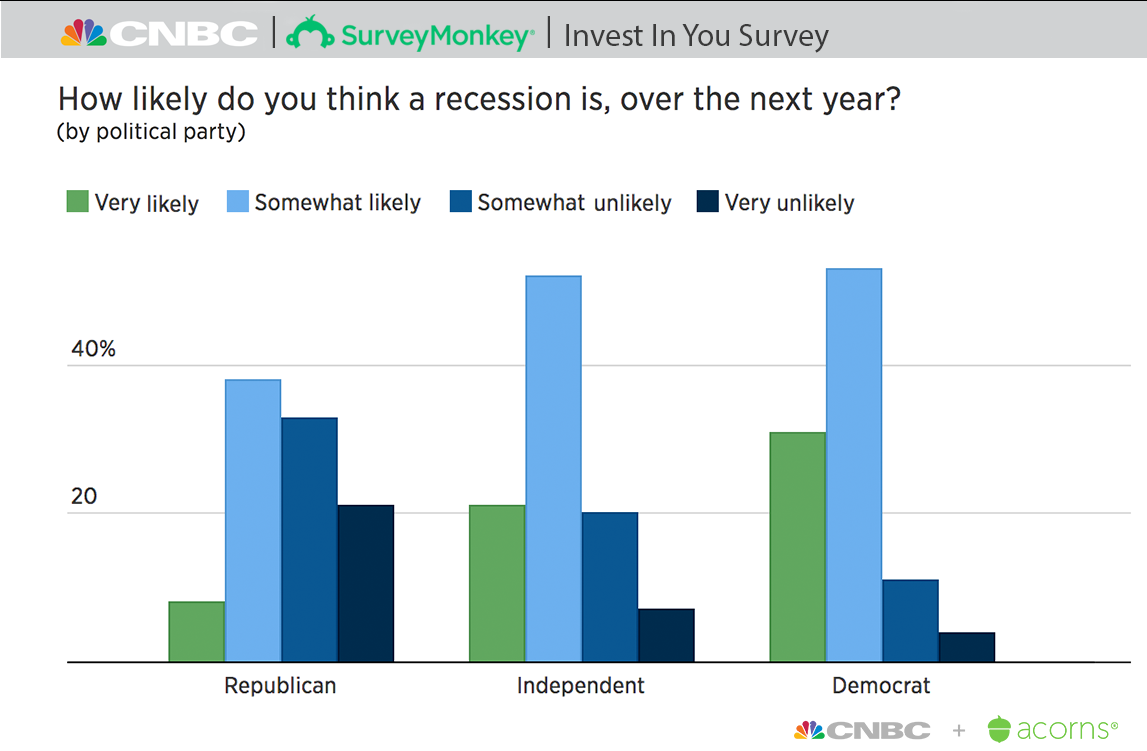 It isn’t just a random stock market drop. A recession is marked by a specific set of economic circumstances.

Generally, if economic weakness — rising unemployment, falling stock prices and a lackluster housing market, to name a few indicators — lasts for two or more quarters, we’re considered to be in a recession. Look for significant decline in economic activity, says the National Bureau of Economic Research.

Don’t say it out loud

Like the name of a horror movie villain, maybe you shouldn’t even say the forbidden word.

People in online financial groups believe the media plays a part in recessions by stirring up fears and economic anxiety. The thinking is that news stories get people talking and then worrying about a recession, which in turn can spark a downturn.

The idea that we can talk ourselves into a recession is not new, says Yale economics professor Robert J. Shiller.

“People tell stories, and it reminds them of other stories,” he said. His latest book is “Narrative Economics: How Stories Go Viral and Drive Major Economic Events.”

More from Invest in You:
Here’s how to get to financial security even after starting late
A better life with tech, but is it worth hundreds a month?
One simple thing can brighten your financial picture

Hearing about these economic periods of distress affects people’s willingness to spend, which in turn impacts corporate profits. “A decline in profits starts creating doubts in people’s minds,” Shiller said.

Any one column or news story is not going to start a recession, said Marc Goldwein, senior vice president and senior policy director at the Committee for a Responsible Federal Budget. However, it could function as a tipping point when the economy isn’t on solid ground.

“They start saving more, spending less. People can actually reduce consumption and growth [in the economy],” Goldwein said. “It’s a paradoxical threat.” In fact, according to the survey, half the respondents said they expect to spend about the same on gifts for family and friends this holiday season.

Some recession anxiety stems from people’s assessment of their current finances.

If you think you’re better off financially than you were four years ago, you may be a Republican.

While almost half of those surveyed said this was the case, only 27% of Democrats agreed. Far more Republicans (66%) say they’re financially stronger than they were in 2016. 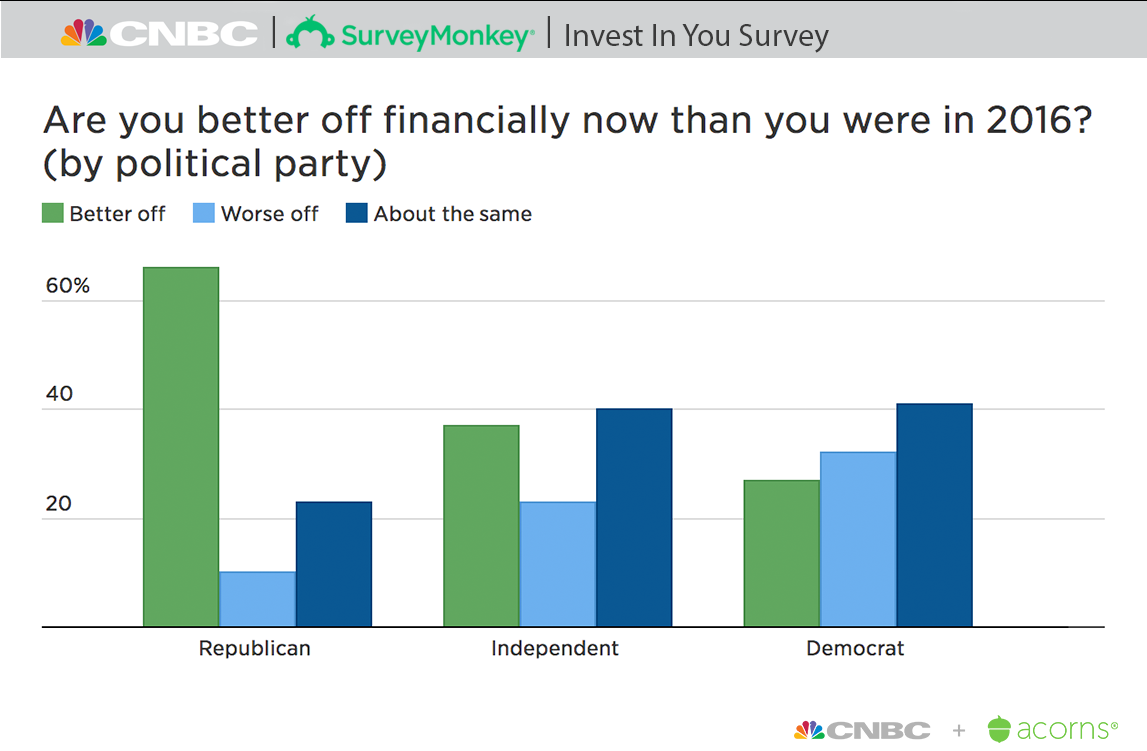 Nearly a third of Democrats said they are now worse off, compared with 10% of Republicans.

In general, Republicans have a rosier view of the economy: Just 23% said their finances are about the same as they were. Nearly half of Democrats and Independents surveyed, on the other hand, said they are in the same shape economically (41% and 40%). 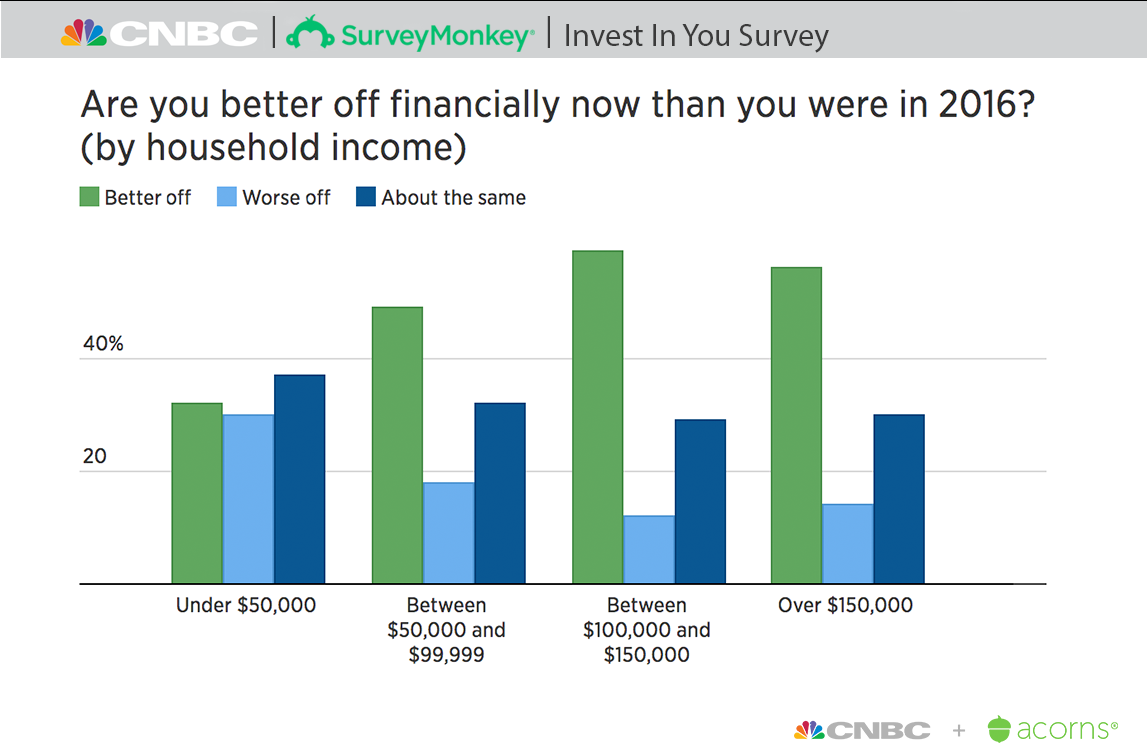 Things you can do ahead of a downturn

A recession can feel personal. After all, says Robert J. Phillips, a certified financial planner and president at Greater Midwest Financial Group in St. Paul, Minnesota, the last recession is still fresh in many people’s minds. When investment portfolios and primary homes both lose value, it makes people uneasy.

Almost half of survey respondents said they were taking active steps to strengthen their finances ahead of a recession, such as paying down debt or cutting their household spending.

A third said they are working on building up their emergency savings. 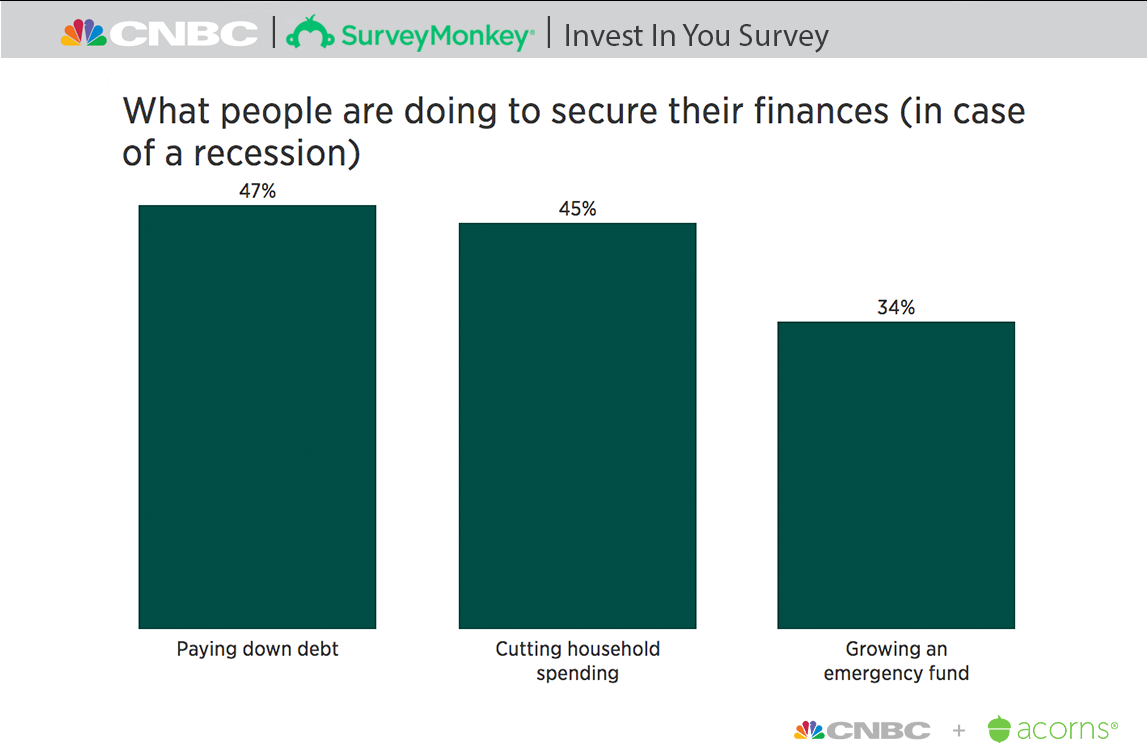 You might look to reduce some risk in your portfolio, whether it’s switching from more volatile stocks to dividend-paying or utility stocks or shifting from an S&P index fund to a balanced fund, Phillips says.

“We call it the sleep index,” he said. How well can you sleep at night if your portfolio is losing value?

Making an allocation change inside a retirement account will not generally incur tax implications or any transaction fees.

Most important is to remember that recessions are a normal part of the financial cycle, Phillips says. Stick with your long-term plan and do not try to time the market.

“Recessions are healthy for the long-term growth of the economy,” he said. People tend to lose sight of this when it becomes a hot topic.

If you can keep your emotions in check, you’ll be in a better position to take the steps that improve your financial health.

Author of “Mind Over Money” and co-founder of the Financial Psychology Institute.

A bit of good news, if we do see a recession, for those who feel squeezed: “A lot times, prices also go down,” Goldwein said.

Fear is a real thing, and it definitely affects decision-making. “When we get scared, our rational brain shuts down and our emotions take over,” said Brad Klontz, author of “Mind Over Money” and co-founder of the Financial Psychology Institute.

Perspective is key. Financial stress is rarely actually life-threatening, Klontz says. If you can keep your emotions in check, you’ll be in a better position to take the steps that improve your financial health.

Despite our anxiety and recession talk, consumer expenditure remains high, Shiller said. A minority of those polled (27%) said they would probably cut personal spending in the next year.

“People aren’t that spooked,” Shiller said. “It’s partly a Donald Trump effect, who models conspicuous consumption and impresses [on us] that the economy is strong.”

The economy reflects people, and people help feed the economy with their attitudes, Shiller added.

“It’s an expression of common opinion and our ability to produce. When they say it’s a strong economy, they mean people are in a mood to spend,” he said.

Our anxieties are not always anchored in reality. “There’s a similar puzzle regarding artificial intelligence,” Shiller said. “So much talk about how that’s going to end jobs, but people don’t seem scared of this.”

CHECK OUT: How to get Costco savings without buying the $60 membership via Grow with Acorns+CNBC.

Are digital wallets safe? Here’s what to know as the battle between big banks and Apple Pay heats up
How To Shrink High Taxes On Your Required Minimum Distributions
Cramer’s week ahead: Fed decision on Wednesday could let the bulls ‘party on’
Why The Renters Bill Of Rights Won’t Help Much
Self-made millionaire: Here are 8 things rich people do differently that make them ‘ultra wealthy’