Let’s call them the undisrupted champions of Wall Street.

A small group of enormous, elite consumer companies — once seen as vulnerable to onrushing digital disruption and shifting public tastes — have persuaded Wall Street that they have a sturdy plan to meet the future. Their stock prices have handily outrun the S&P 500 over the past year, and investors have endowed them with a valuation premium to the broad market of 40%-50%.

While not a comprehensive or authoritative list, this group surely includes Walt Disney, Walmart, Nike and Starbucks, whose shares are all up more than 20% over the past 12 months compared to 13% for the S&P 500.

The push higher in the shares is not linked to an unexpected acceleration in the companies’ profit growth, but a more generous valuation of their businesses. The four stocks now trade between 23-times the next year’s expected earnings (Walmart) and more than 29-times (Nike), compared to about 17.5 for the S&P 500 as a whole. 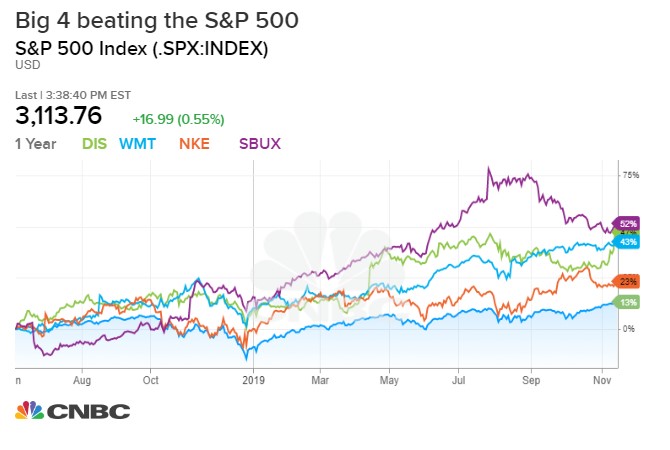 The companies range from $100 billion to $340 billion in market value, so in part the stocks benefit from a broader preference in a mature bull market for companies of heft that can preserve value over the very long term. They are financially potent enough to make heavy growth investments while also buying back plenty of stock and paying decent dividends.

Beyond that, these companies have been seen from time to time as potential victims of disruptive industry and consumer changes: Disney under assault from cord-cutting and streaming video; Walmart at the mercy of Amazon; Nike outmaneuvered by Adidas’s viral marketing and with less control over online sales; Starbucks unable to handle traffic from online ordering and subject to upstart attacks in China.

Last week, Disney’s push to disrupt itself with the Disney+ streaming service was a booming success, with more than 10 million day-one subscribers and a storm of positive buzz that the company will instantly achieve scale in a business created and dominated by Netflix (whose shares are down 30% from their 2018 record high).

Never mind that Disney acquired Fox assets for $70 billion at a full valuation, or that its investments in content and technology mean profits are projected to be flat in the just-started fiscal year. The market has determined that part of Disney is worth something close to what Netflix is, and its entertainment factory will thrive for decades thanks to strong, direct connections with customers.

While he chalks this up to loose-money policies juicing growth over value stocks, it could just as easily be viewed as a market determination that technology-enabled intellectual property has greater enduring value than inert financial capital.

In a less-remarked move in recent days, Nike ended its agreement to distribute shoes and clothes through Amazon – once viewed as a fast track to ecommerce scale. The company is more secure in its ability to own and leverage direct digital customer relationships and sales, helping its stock maintain its “undisrupted” premium.

Starbucks never truly faced a threat of another globally ubiquitous coffee chain, but in recent years it was viewed as having botched the operational logistics of digital ordering and in-store efficiency. But new investments have raised its capacity to handle the crush. And its app is now said to be the second-largest mobile-payment tool to Apple Pay, emboldening some analysts to suggest it’s a source of significant hidden value within the company.

Walmart’s stout valuation following its pivot toward embracing a more aggressive online-sales effort and in-store pickup initiatives is all the more noteworthy given the way much of retail (aside from the few giants such as Target, Costco and Home Depot) have been cheapened and placed in the “secular decline” bucket.

The company’s strong results, including 3.1% quarterly domestic same-store sales growth, ratified the strategy for sure. But did the stock reaction also raise the prospect that investors have been a bit too aggressive in upwardly revaluing these elite undisrupted names?

Walmart shares popped to a new record high Thursday morning on the upbeat results, then reversed lower and by midday Friday had shed 5% from that peak price.

Disney, too, surrendered almost half of the 7% gain logged Wednesday on its Disney+ subscriber release. Starbucks, while still up 30% this year, seems to have overshot to the upside in the summer and the stock remains 15% below a July peak.

Have investors crowded a bit too eagerly into these mega-cap self-disruptors as shelter from the reckoning going on in cutting-edge consumer Internet companies? Especially given the new digital efforts Disney and Walmart are embracing are less profitable and predictable than their proven core businesses?

At this point, the pullbacks in these beloved stocks of the anointed consumer-company elite represent minor slippage in powerful uptrends. But the action bears watching as the market sorts through the likely winners and losers of our “Everything now, the way I want it” economy.