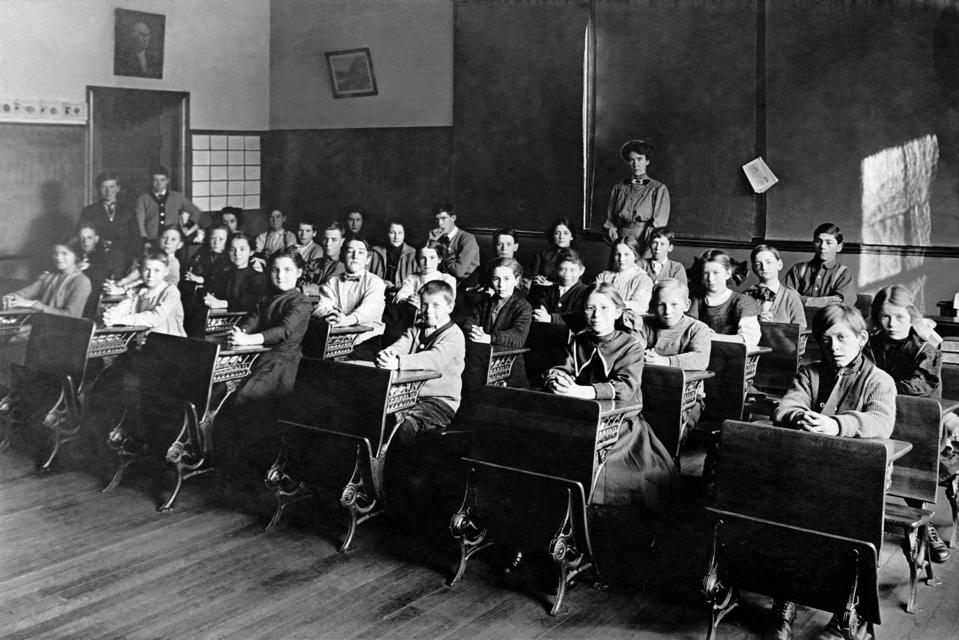 On Saturday, I recounted the ways in which the Chicago Teachers’ Pension Fund was set up for failure, with most teachers never seeing any of the money they paid in but the lucky few hitting the jackpot with comfortable benefit payouts at young ages, and, for those in the early years of the plan, without paying much of anything into the plan at all.

Not surprisingly, the plan was troubled from the start. Again perusing Chicago Daily Tribune articles from a database search, here’s the early history of that plan after its initial implementation in 1895 told through excerpts from those articles:

Secretary Graham of the Board of Education . . . pointed out the defects of the law . .. as follows:

“This law is unjust and oppressive to the Superintendents, principals, and other employees of the Board of Education who receive over $1,200 salary. All of the teachers and employees are taxed 1 per cent, but only those who receive $1,200 or less receive an annuity which is one-half of their salaries [because of the $600 maximum]. . . .

“Again, there are teachers and other employees who either cannot or do not wish to teach or work in schools for twenty-five years, and these persons have to stand a tax for years without any possibility of reaping any benefit. . . .

“On the other hand, . . . There are a score or more of teachers who were retired on pensions before the law had been in operation six months, and who therefore have never paid the 1 per cent tax for a single year.”

A further examination of the school teachers’ pension fund made yesterday showed that the statements concerning its condition made at the meeting of the Board of Education on Wednesday evening, and which prompted the board to name a committee to revise the pension law, were, if anything, under the mark. The fund’s liabilities are greater than its income, and it is felt to be a question of only a short time when the surplus will be wiped out and no more money remain with which to pay pensions. . . .

“The whole theory of the pension law is wrong,” said Trustee Christopher. “It provides that every teacher who serves twenty years can retire on half salary, providing the amount is not more than $600 a year. In return the teachers pay 1 per cent of their salaries into the fund. Take the case of a teacher who pays for the full twenty years. If her salary has been $1,000 a year, she pays $200 for the full term. The first year’s pension amounts to $500, or $300 more than she has paid in, and each succeeding year’s pension is just so much more. That sort of an arrangement is bound to fail.”

The plan proposed by the committee is to consult some good insurance actuary, and see if the law cannot be changed so as to provide for a permanent fund.

The schoolteachers and employees’ pension fund was declared hopelessly insolvent yesterday. The statement was made by H.S. Vail, formerly official actuary for Illinois, Indiana, Iowa, and Wisconsin, to the George Howland Club of Men Principals, which had requested the investigation. The advice which accompanied the report was that legal steps should be taken at once to close up the fund, recognizing the various equities involved.

The article further reports that Vail calculated a deficit of $618,484, based on an approximate present-value calculation of liabilities only for existing retirees; with assets of $92,177 and liabilities of $716,661, that’s a funded status of 13%.

The insolvent condition of the school teachers and employees’ pension fund, reported in The Tribune earlier in the present month, was verified last evening when the Pension Fund commission, consisting of the members of the Board of Education. . . voted to sell two $1,000 water certificates to meet a deficit of $1,393 accruing for the month of April alone.

A reduction of 25 per cent in the annuities paid to teachers out of the pension fund was voted last night by the Pension board. . . . it must be followed soon by another reduction, since the fund is not on a sound basis.

After a pension reform bill was introduced, which would have paid $400 after 25 years of service . . .

The proposed pension bill framed by a committee of teachers and school employees, which was said a week ago to be nearly ready to go to Springfield, was shelved practically at a meeting yesterday afternoon. J.H. Nitchie, an actuary, was called in, and he told the committee some facts about life insurance. He discouraged the dreams of those who have expected to create a pension fund that would pay a much higher rate than for regular associations. . . .

Mr. Nitchie is supposed to have shown the committee that they still hope to get something for nothing and that the contribution of 1 per cent of the salaries will earn less than $100 a year for the contributors who retire after twenty-five years of service.

A new pension law was indeed passed in April 1901, but without much change: in addition to the 1% contributions, new money flowed in in the form of half the value of license fees from “street railroads or elevated railroads,” and teachers were offered the option to opt out of the system. In addition, the prior 25% reduction was maintained.

On May 13, 1907, new legislation was passed which raised the potential maximum back to $400 (though the school board had discretion in terms of payments) and increased the annual employee contributions, as flat dollar amounts, from $5 per year for those with less than 5 years of service to $80 for those with over 15 years, along with providing that interest from “school funds” would be directed into the fund. Teachers were also again required to participate.

On May 21, 1911, the school board was authorized to contribute directly to the funds, up to a match of the teachers’ contributions, when combined with interest on school funds.

On June 11, 1913, this prior authorization of board of education contributions was made mandatory, and the board was authorized to voluntarily contribute double the prior amount.

But despite these increases in contributions:

The teachers’ league asks for an actuarial report in connection with the fund.

Every pension fund upon which Chicago’s public servants are dependent in old age, sickness, disability, or death from injury, is financially unsound and practically bankrupt, according to the report sent Gov. Dunne last night by the Illinois pension laws commission. From the recommendations for a revised pension system a bill will be drafted and offered to the next legislature. . . .

These are findings of widely known actuaries. Their report recommends a drastic change in the pension system and outlines an ambitious plan to bring the numerous and chaotic public service pension funds under one expert supervision, while preserving them as separate foundations. . .

The report finds that the police and firemen’s pensions were virtually unfunded; in comparison, the teachers’ funded status of 17% was positively sunny.

Most of the public employees’ pension funds are insolvent, or are at the jumping off place, and radical methods must be adopted by the present session of the legislature, unless a grave crisis and a possible scandal are to be averted. . . .

The Illinois pension laws commission proposed consolidation of all Chicago pension funds into one, and all non-Chicago funds into another large consolidated fund, citing deficits for the city pensions.

“The statewide public school teachers’ fund similarly is headed in the direction of a large deficit. The police and fire funds of the cities outside of Chicago are too small to be sound financially. . . .

“The standard plan proposed by the commission is what the actuaries and other insurance men call a reserve plan. It calls for the accumulation of annuities and toward life insurance for widows’ annuities, from year to year, while service is being rendered, and while these liabilities which will mature in the future are being incurred.”

Did it work? An April 3, 1921 report announces that the Police plan has been reformed and will henceforth be on “sound actuarial footing.” But as for the teachers, the litany of pension unfunding never ended, including this final (for the moment) article with more laments from an actuary-Cassandra on December 21, 1933:

Placing of the Chicago school teachers’ pension system on the allocation-reserve basis to supplant the present stipulated annuity plan was urged yesterday by Donald F. Campbell, authority on pension law and actuary of a number of large pension systems of public employees.

All the other pension bases in the city, including those of city and county employees, are on the allocation-reserve basis. Under this plan the pension money reserves are allocated and built up for each employee from year to year while he is in service. These funds, which are invested in 4 per cent municipal bonds, are accumulated from pension taxes and from systematic deductions of the salaries of the participating employees.

This latter system is considered more actuarially sound in that it more precisely safeguards the payment of annuities in future years. The amount of annuity paid to retired employees is computed on the basis of the salary last earned, the length of service, and age.

So there you have it. Of course, the follow-up question of “were the police and fire pensions truly put on a sound footing as proclaimed, and why are they so underfunded now, if so?” will have to wait for another day.

As always, you’re invited to share your comments at JaneTheActuary.com!