Many Americans are feeling pretty good about their financial future, at least over the next year.

In the latest CNBC Invest in You survey, 43% said they think they and their families will be better off financially a year from now. Of those polled, 42% said their situation will be the same, and 13% said they thought they would be worse off.

“People seem to be putting their heads in the sand with regard to what could be coming up for the financial future,” she said. 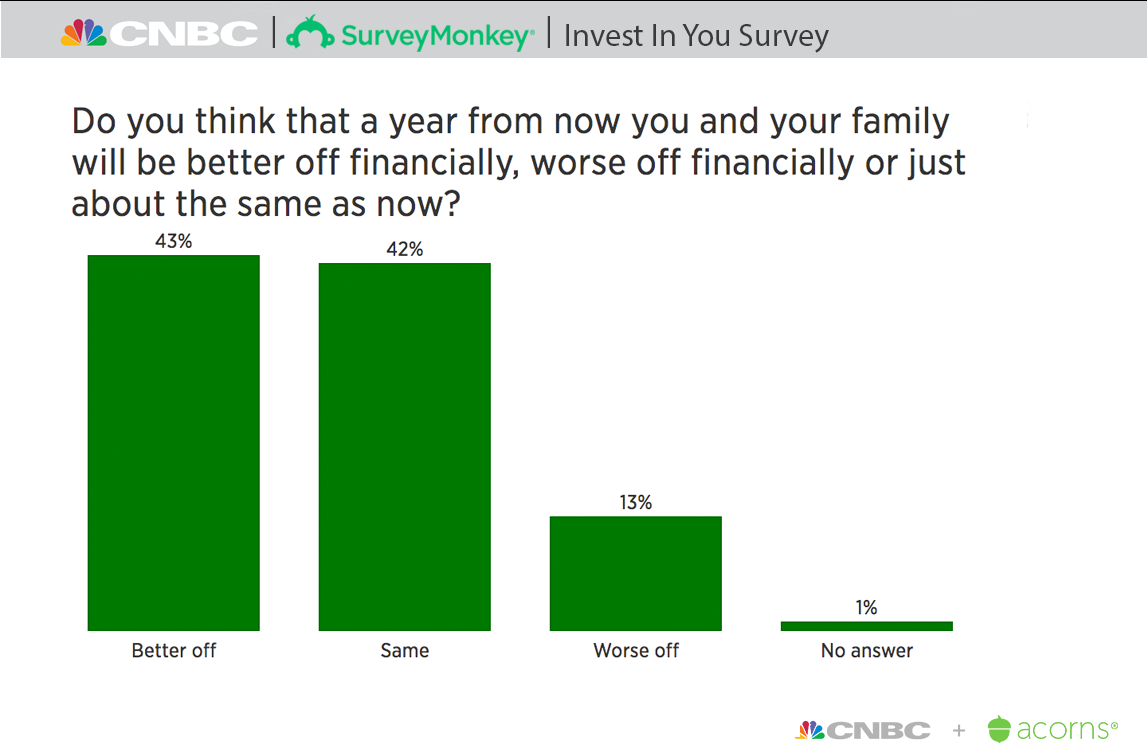 In fact, of those surveyed, 65% said they think a recession is likely to occur over the next year. The national poll, conducted for CNBC and Acorns by SurveyMonkey Oct. 21–25, surveyed 2,776 adults and had a margin of error of plus or minus 3 percentage points.

Hauer said the majority of Americans who think they’ll be better off or at least in the same financial situation aren’t necessarily being unrealistic.

Instead, she feels like it is human nature for people to not pay attention to the uncertainties around them because they can’t control it.

“Because people just don’t know which way things are going to go, they are just trying to be as optimistic as possible and just roll with it,” she said.

The issue is that being optimistic could lead people to be unprepared if things do head south, explained Hauer, author of “Financial Advice for Blue Collar America”

Here are some steps to take to make sure you aren’t caught off guard.

Pull your head out of the sand and make sure you are being as financially responsible as you can, said Hauer.

That can mean paying closer attention to your bills and spending.

For example, you can set deadlines for the issues you have to address, such as a bill that is coming due. If you aren’t 100% sure you’ll have enough money to meet the minimum payment, instead of putting it off, force yourself to look at your account balance, do the math and make adjustments where necessary.

You can also periodically go through some of your expenses, such as cable, internet and cell phone, and call your providers to see if you can reduce the bill. Hauer said she does this every three to four months and usually gets some kind of adjustment from at least one.

Every financial planner will tell you that you have to have money put aside in case you have an emergency. That can be anything from sudden unemployment to your car breaking down.

However, 28% of Americans have no emergency savings, according to a July survey from personal financial website Bankrate.

“The more uncertain the economic times are, the more important it is for someone to have an emergency fund,” Hauer said.

Don’t wing it when it comes to saving money.

Instead, write down your goals, what you are saving for and the timeframe for each of those goals, as well as how you will track it, said Melissa Ridolfi, vice president of college and retirement leadership at Fidelity Investments.

By doing so, it will help you get comfortable about your ability to successfully reach your long-term savings goals, she said.

“Having a financial plan, that factors in different market scenarios, will help you understand the possible impact on your investments over your planning time horizon,” Ridolfi explained.

More from Invest in You:
How to make people smarter about money
Billionaire Ray Dalio warns retail investors against big mistake
Tennis legend Andy Roddick: The ‘most powerful thing you can be’

An April study by Fidelity Investments found that only 18% of Americans have created a comprehensive written plan for their retirement. Respondents said they hadn’t thought about it, didn’t know where to begin or felt they were too far behind to make a difference.

That same study on the “retirement mindset” found that, while 62% of Americans were confident about their current financial health, a majority lacked confidence in their retirement future.

You can start small

Instead of feeling paralyzed about the thought of saving for retirement, think about taking small steps, Ridolfi said.

“People get overwhelmed by, ‘Oh my gosh, I need this much money,'” she said. “Don’t let that stop you.

“Start saving as much as you can, as often as you can.”

First, look at your spending habits and where you might have some extra cash. That could mean cutting back on certain things, such as a credit card that has an annual fee or a subscription you haven’t used in a while. Also, tackle high-fee credit cards first when it comes to paying down debt.