Many workers don’t need experts to tell them they aren’t putting enough away for their golden years — they apparently already know it.

More than half of U.S. adults (52%) say they are behind where they should be when it comes to saving for retirement, according to a new survey from Bankrate.com. Among pre-retirees, the lag is more pronounced: 57% of younger baby boomers (age 55 to 64) and 63% of Generation X (age 39 to 54) say they’re behind.

“If you look at the economy, you might say it’s great,” said Mark Hamrick, senior economic analyst at Bankrate.com. “But the reality is that there can be disconnects between it and Americans’ personal finances.”

The economic expansion, now in its 11th year, has been accompanied by strong stock market gains — and in turn has led to retirement account balances that have made 401(k) account millionaires out of a record number of people at Fidelity Investments, the nation’s largest 401(k) plan provider.

At the same time, however, not all workers have benefited equally. For example, the median account balance — half are above, half are below — among pre-retirees is far from the $1 million mark, according to Vanguard’s recent How America Saves Report. For people ages 55 to 64, the median account balance in 2018 was about $61,700. For those ages 45 to 54, it was $40,200.

And, according to the Bankrate report, 38% say they have never had a retirement account. That’s most pronounced among Gen Xers (36%) and households with annual income below the $30,000 mark (58%).

Part of the problem could be that workers have raided their accounts before age 59½, which is when 401(k) plans and individual retirement accounts typically can be tapped without facing a 10% penalty for early withdrawals.

“When people are making withdrawals from these accounts, they have some justification to do it because they have other financial priorities,” Hamrick said. 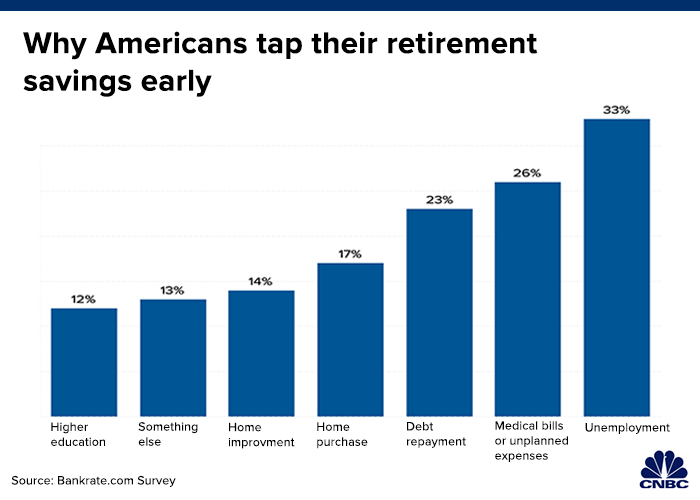 However, on top of potentially paying taxes or penalties on the withdrawals, removing that money from the account also removes the likely gains it would have generated over time with compounding interest.

Turning to retirement accounts in a pinch could be the result of no emergency savings, Hamrick said.

“The two things are linked at the hip,” he said. “If someone doesn’t have emergency savings, they turn to their 401(k) and decide to worry about the consequences of that later.

“But it puts them farther away from where they need to be.”

More from Invest in You:
Avoid these common 401(k) mistakes to maximize your returns
4 ways to avoid the overspending trap this holiday
A financial expert shares 3 tips to build a realistic budget

Meanwhile, some survey respondents (16%) say they are where they are on track with their savings, and 11% say they’re ahead of their goals.

Another 20% have no idea how they’re faring.

“I hope to some degree this is a call to action for Americans to take ownership of their financial standing,” Hamrick said.

SIGN UP: Money 101 is an 8-week learning course to financial freedom, delivered weekly to your inbox

CHECK OUT: Save hundreds of dollars a month by learning 3 easy skills via Grow with Acorns+CNBC.

Sam Bankman-Fried tried to influence witness through Signal, DOJ alleges
High Housing Costs Drove Relocation For A Record 25% Of Home Buyers At The End Of 2022
Almost half of Americans think we’re already in a recession. Here’s how to prepare if they’re right
Glacier-Surrounded Hunting Lodge Carries On A 100-Year Tradition In New Zealand
House GOP study group is proposing changes to Medicare. Here’s what you need to know