The best-performing stock in the world just lost nearly all its value in the blink of an eye.

ArtGo Holdings, a Chinese marble miner, saw its stock crash 98% in Hong Kong trading overnight after MSCI decided not to add it to its foray of indexes. That plunge wiped out more than $5 billion in market cap for the company.

Prior to their collapse, the shares had skyrocketed 3,800% for the year, making it the world’s best performer with more than $1 billion in market cap. 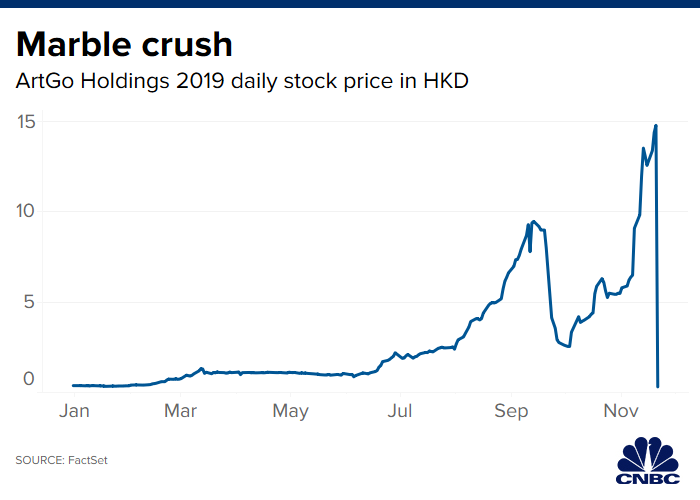 MSCI‘s decision to keep ArtGo out of its indexes came a day after The Wall Street Journal — which called it a “mysterious marble bubble” — pointed out the disparity between the company’s fundamentals and its stock price. The WSJ noted that there was no upitck in demand for marble stones this year even as the stock soared.

In other words, this looks to be pure speculative trading banking on validation from MSCI.

ArtGo’s price-to-sales ratio, a valuation metric used by investors, had risen to 73 before plummeting to 1.51 on Thursday, FactSet data shows. ArtGo’s overall sales have also plummeted more than 56% on a year-over-year basis. Yet, the stock surged ever higher.

MSCI did not immediately respond to a request for comment. ArtGo Holdings could not be reached.

Is Social Security Going To Go Bankrupt?
Inside The California Mansion Where Harry And Meghan Filmed Their Netflix Documentary
Nashville Estate Loved By Country Music Celebrities Is Up For Absolute Auction
A Conversation With Designer Katie Kime
State Experimentation With Wealth Taxes.