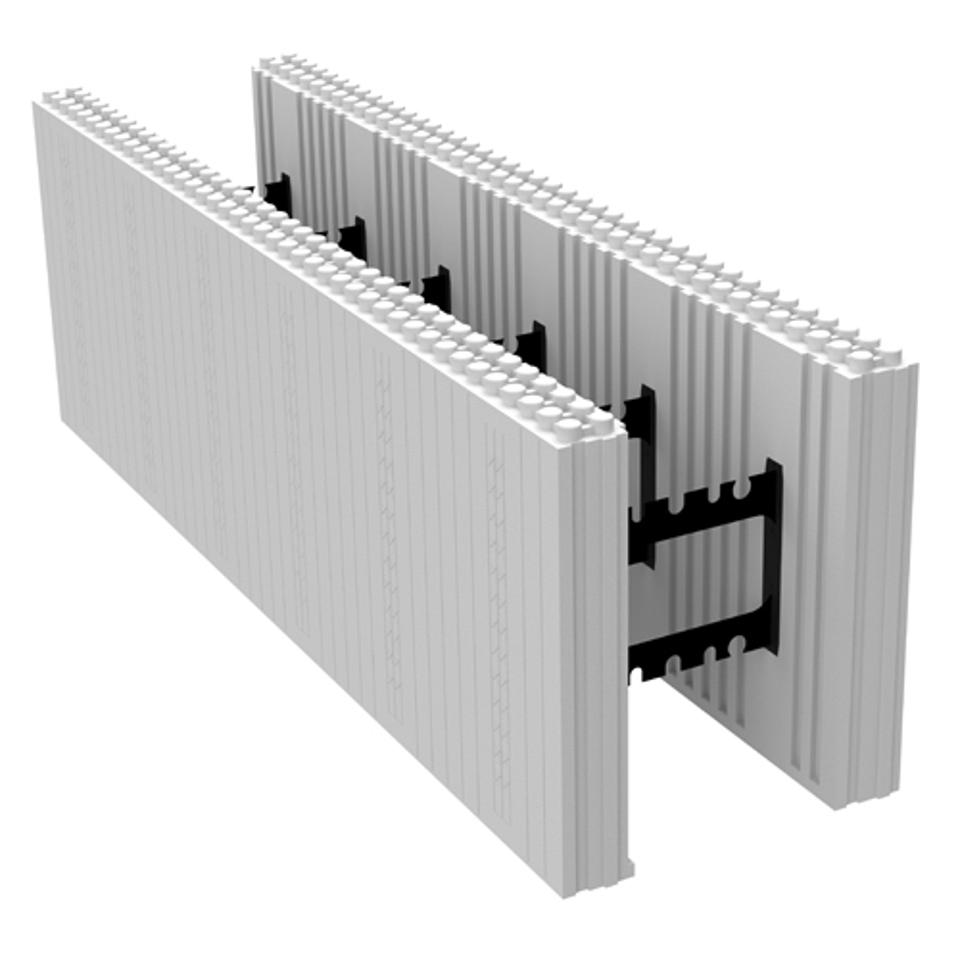 For decades, concrete walls and foundations were made the same way. Plywood or plain boards are built into forms that contain steel reinforcing bars (rebar) and into which wet concrete is poured. When the concrete hardens, or cures, the forms are ripped off to reveal the bare concrete wall or foundation.

Today, wood forms are giving way to polystyrene insulated concrete forms made from either polystyrene or other materials such as woodcrete (a recycled cement bonded wood fiber material), which fit together like giant Lego pieces, stacking to create a very efficient foundation envelope for an entire house. When concrete cures inside the ICFs the forms stay in place to provide insulation inside and out. Walls generally are between 4 inches and 12 inches thick, depending on the location and climate. These interlock, side to side and top to bottom, leaving no gaps. as the panels go up, vertical rebar is installed at close, regular intervals and secured in place. Finally, concrete is slowly poured down through the structure and all voids carefully filled.

Cement bonded wood fiber insulated concrete forms (ICFs) were originally,  commercially produced by a Swiss company, Durisol in 1938.  The product became popular because it was cost effective and could be used in construction by mostly unskilled labor. By 1959 it was reported that Durisol was able to cut traditional labor costs by 20 to 30 percent. Durisol is still in business today in the United Kingdom and in the United States has re-branded under the name Nexcem. Both of these companies use clean recycled waste wood bonded with cement for the forms. Polystyrene versions of the insulated concrete forms were first introduced in the late 1960s. There are pros and cons with both materials but ultimately both types of materials provide a superior building envelope when compared to conventional construction.

Today ICF is used internationally because it reduces labor costs, is lighter to install, provides superior waterproofing and can be installed in any climate. The steel-reinforced concrete core protects the home against fire, hurricanes, and earthquakes. It also reduces noise infiltration.

One of the best advantages of ICF is the energy efficiency it provides for the home. According to Logix one of the manufacturers of ICFs “The Logix wall assembly delivers up to 60% lower air infiltration than a traditionally built wall.” This translates to better energy efficiency and lower energy costs.

Although heavier and slightly more expensive than polystyrene, the Nexcem ICFs have other advantages to compensate. According to Nexcem, “The main reason our customers choose Nexcem is because our product offers a material that won’t burn or melt in a fire and can be left exposed on the interior. Our vapour permeable material also regulates humidity in the home to create a comfortable, natural and healthy living space.”

ICFs are most often used for foundations but they can be used for walls, roofing and flooring. In addition to be used for single family homes, they are also used for multifamily structures and commercial buildings.

Some of the other manufacturers of ICF are Amvic, Nudura and Fox Blocks