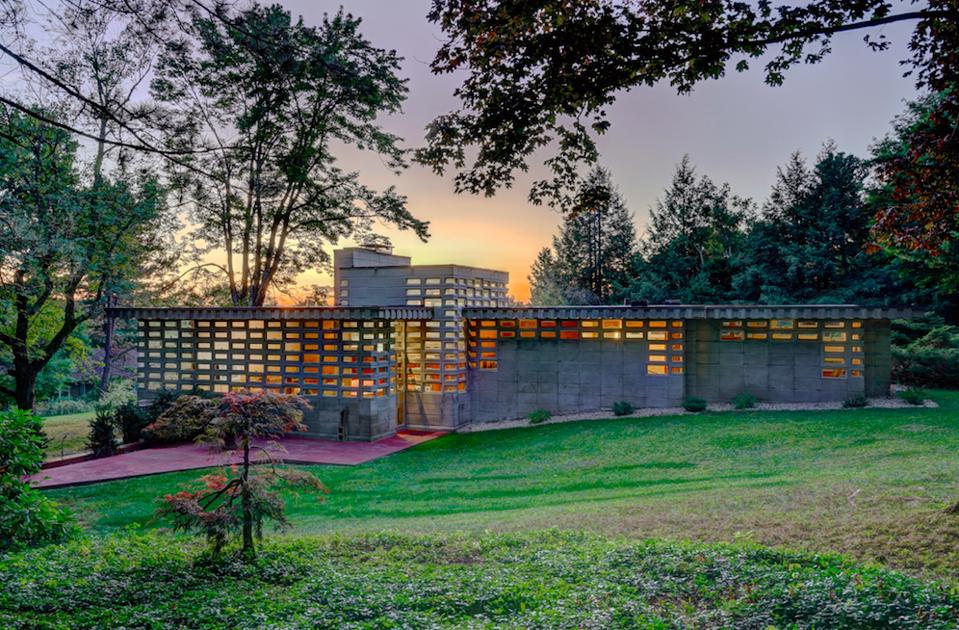 One of only seven of Wright’s Usonian Automatic houses ever built has been identified in Manchester, New Hampshire. Offered for sale for $850,000 in September, the remarkably well-kept two-bedroom, two-bathroom home was purchased and given to the Currier Museum by an anonymous donor. The museum, located in Manchester, intends to preserve the house and to make it accessible to the public.

“It is a real privilege to be able to help the Currier Museum of Art acquire this house designed by Frank Lloyd Wright, known as the Kalil House,” said the anonymous donor in a statement released by the Currier Museum. “This is an important piece of American architecture and the public’s enjoyment of this house will be increased immeasurably by having the Zimmerman House just three doors down for comparison and contrast.”

The house, built in 1957, was commissioned by Doctor Toufic and Mildred Kalil of Manchester, New Hampshire. The Usonian Automatic design predicts many aspects of open-plan modern homes. Wright used contrasts of narrow and wide spaces, and light and shadow to enliven the small two-bedroom structure. It is built of concrete components made in Manchester and mahogany imported from the Philippines.

Neighbors and friends of the Kalils, Dr. Isadore and Lucille Zimmerman, had commissioned their own Wright house in 1950; the two houses stand a companionable three doors away from each other. The Zimmerman House gave their house, along with an operating endowment, to the Currier Museum in 1989.

“Frank Lloyd Wright intended his Usonian designs to be affordable to the broader American public, but each is a distinctive work of art,” states the Currier Museum’s director, Alan Chong. “Although they are about the same size and on the same street, the Zimmerman and Kalil houses are very different in character.”

Wright patented the technique seen in the Kalil House, where he used interlocking concrete blocks and reinforced them with horizontal and vertical rods set into the walls and roof, with a grout mixture between the rods and blocks. Wright intended to someday make this technique easy and available for homebuyers to construct themselves.

Frank Lloyd Wright designed only a handful of houses in New England. With the impending sale of the Kalil House, there was a real danger that it might be altered, moved away or even torn down.

The 1,406 square-foot house, located on an oversized 0.73 acre city lot, features an L-shaped plan, as well as many signature Wright details including original Wright-designed furniture, original textiles, and a Cherokee Red concrete floor with radiant heating and in-floor air ducts. The unique design of the house filters in a great amount of natural light, with 350 individual glass windows that are both fixed and operable. There is also a fireplace, a study, and a carport.