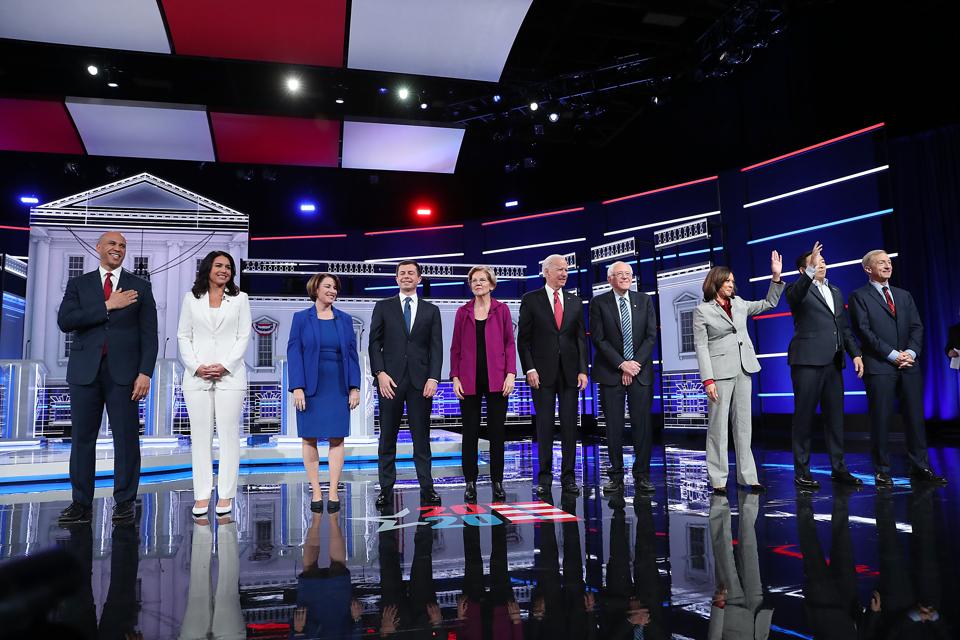 While the lack of affordable housing continues to plague the country, the question of what Democratic presidential candidates plan to do to help solve the crisis drew significantly different responses Wednesday during the fifth primary debate of the 2020 election cycle in Atlanta.

Here’s what three presidential candidates had to say last night about the persistent crisis in housing affordability.

Sen. Elizabeth Warren: “Our housing problem in America is a problem on the supply side. And that means that the federal government stopped building new housing a long time ago, affordable housing. Also private developers, they’ve gone up to McMansions. They are not building the little two-bedroom, one-bath house that I grew up in. The garage converted to be a bedroom for my three brothers. So I’ve got a plan through 3.2 million new housing units in America. Those are housing units for working families, for the working poor, for the poor poor, for seniors who want to age in place, for people with disabilities, for people who are coming back from being incarcerated.”

Warren added: “It’s about tenants’ rights, but there’s one more piece. Housing is how we build wealth in America. The federal government has subsidized the purchase of housing for decades for white people and has said for black people ‘you’re cut out of the deal.’ That was known as red-lining. When I built a housing plan, it’s not only a housing plan about building new units, it’s a housing plan about addressing what is wrong about government-sponsored discrimination, how we need to address it, and we need to say we are going to reverse it.”

Billionaire Tom Steyer: “When you look at inequality in the United States of America, you have to start with housing. Where you put your head at night determines so many things about your life. It determines where your kids go to school. It determines the air you breathe, where you shop, how long it takes you to get to work. What we’ve seen in California is as a result of policy, we have millions too few of housing units. And that affects everybody in California. It starts with a homeless crisis that goes all through the state, but it also includes skyrocketing rents that affect every single working person in the state of California.

Senator Cory Booker: “As a mayor who was a mayor during a recession, who was a mayor during a housing crisis, who started my career as a tenants’ rights lawyer, these are all good points, but we are not talking about something that is going on all over America, which is gentrification. And low-income families being moved further and further out, often compounding racial segregation. And so all of these things we need to put more federal dollars in it, but we’ve got to start empowering people. We use our tax code to move wealth up in mortgage interest deduction.

“My plan is very simple. If you’re a renter who pays more of a third of your income in rent, then you will get a refundable tax credit between the amount you’re paying in the area median rent. That empowers people in the same way we empower homeowners. And what that does is it actually slashes poverty, 10 million people out. And by the way, for those people who are facing eviction, it is about time that the only people when they show up in renters court that have a lawyer, it’s not the landlord, it is also low-income families struggling to stay in their homes.”

Home builders say several headwinds are limiting their ability to add greater inventories of affordable housing, including a persistent labor shortage, difficulty overcoming NIMBY (Not In My Back Yard) opposition and rising costs for building materials due to tariffs.

Greg Ugalde, chairman of the National Association of Home Builders and a home builder and developer from Torrington, Connecticut, issued a statement regarding the comments on housing made by the Democratic presidential candidates during the debate.

He said, “It is significant that the Democratic candidates running for our nation’s highest office acknowledged the urgent need to tackle America’s housing affordability crisis and recognized the important role that housing and homeownership play in helping to build a strong and stable economy.”

Ugalde added, “The Trump administration has also made this issue a priority through its recent plan to overhaul Fannie Mae and Freddie Mac and the president’s executive order to address America’s housing affordability challenges. Congress must now take the lead and act in a bipartisan manner to advance comprehensive housing finance that provides a limited federal backstop to ensure the 30-year mortgage remains readily available and affordable.”

75% of retirees fall short of a key retirement income goal. These steps can help
South Florida’s Trump Group Just Reset The Global Bar For Luxury Real Estate—Again
What Would The FAIR Tax Really Be Like ?
Getting your credit score above 800 isn’t easy, but it’s ‘definitely attainable,’ says analyst. Here’s how to do it
Managing Homes, Dollars, And Building Codes As They Go Up In Wildfire Flames