CNBC’s Jim Cramer takes a look at the week ahead in stock market news as Wall Street prepares for a short week of trading with Thanksgiving on Thursday. The “Mad Money” host sits down for interviews with Clorox CEO Benno Dorer and SoFi CEO Anthony Noto. Noto says he expects to see consolidation in the financial services industry as emerging fintech companies offer commission-free trading and other services.

Investing into the Thanksgiving holiday 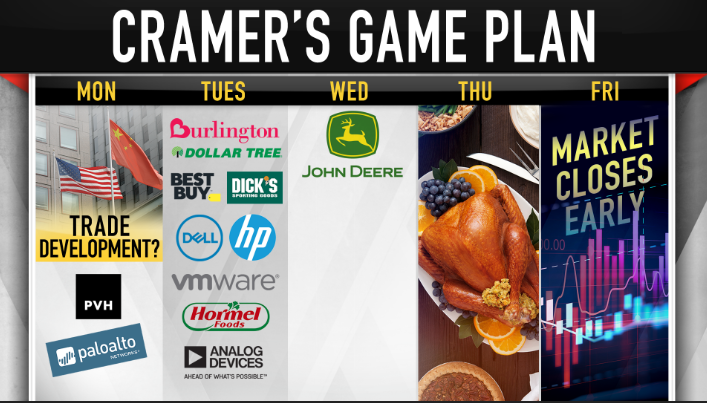 Wall Street is counting on a breakthrough in U.S.-China trade negotiations, but CNBC’s Jim Cramer isn’t banking on it.

President Donald Trump, again, on Friday teased that the U.S. was nearing a trade agreement with China, while Chinese President Xi Jinping signaled that Beijing also wants to land a deal but would “fight back” if necessary.

“I don’t think it’s the end of the world if there’s no breakthrough in the trade talks, but I recognize that people are getting a little too confident we’re going to get a deal,” the “Mad Money” host said. “Of course, a deal is always possible, but the longer the stock market stays up, the less likely it is that we’ll get one. A strong market means President Trump has more leverage to hold out for better terms.”

The major averages all broke multi-day losing streaks in Friday’s session — posting gains of as much as 0.39% — and snapped multi-weekly win streaks amid trade uncertainty. With a holiday around the corner, Wall Street will have a shortened week of trading. The stock market will be closed on Thanksgiving Day Thursday and will close at 1 p.m. on Friday.

There will, however, be a full slate of earnings reports coming out in the days prior. Cramer gave viewers an overview of what he has circled on his calendar.

“After Wednesday we eat turkey and on Friday we eat leftovers knowing there’s an unwritten rule that nothing important is supposed to occur on Wall Street,” the host said. “Will the president slaughter a turkey this year, or slaughter the market? I bet he goes for the former.”

Clorox has “bold” plans for the next decade to reduce its negative environmental impact, CEO Benno Dorer told CNBC.

“We think doing something good for the planet is also good for business,” Dorer said in a “Mad Money” interview. “With our new strategy, which leads us through 2025, we’re going to make a double-down effort on sustainability.”

So far, one manifestation of Clorox’s environmental commitment is its compostable cleaning wipes, which launched in the late second quarter, Dorer said.

The comment comes in the wake of multiple broker companies making moves to ditch commission trading and after news of a probable merger between Charles Schwab and TD Ameritrade.

“We assumed there’s going to be a fair amount of consolidation” in the industry, Noto said in a “Mad Money” interview. “The financial services industry really hasn’t had the type of innovation that you’ve seen in e-commerce, as you’ve seen in online travel, and just in this year we launched products that have never been brought to the market before.”

In Cramer’s lightning round, the “Mad Money” host zips through his thoughts about viewers’ favorite stock picks of the day.

: “I think if you really do want to buy it — I’m not going to necessarily recommend buying it — you wait it out about another maybe 10, 15 points down, and then maybe take a look.”

Dunkin’ Brands Group: “Actually, I prefer Starbucks to Dunkin’ Donuts. Starbucks is way down from its high and I think it’s got more momentum and has gotten too cheap, so that’s why I prefer it.”

Lam Research: “Oh, it’s been crazy, but you know what we’re up about 80 points for the charitable trust. We did trim back a lot because we didn’t want to be pigs. Bulls make money, bears make money and pigs they get slaughtered. I would wait a little bit before I would buy more.”

Sam Bankman-Fried Bought This Washington DC Townhouse, Now For Sale At Exactly What He Paid For It
The Covid pandemic drives Pfizer’s 2022 revenue to a record $100 billion
Travel companies are ‘greenwashing’ — here are 3 ways to find ones that aren’t
Top Wall Street analysts like these stocks for maximum returns
Tourism is roaring back in China. But the $6 trillion consumer market is digging itself out of a deep slump