This month has become a sideways “slowvember” slide in recent weeks, with stocks remarkably steady near record highs, as investors are again left to wonder if the tape is resting or rolling over.

The August lows in both the S&P 500 and 10-year Treasury yields continue to look like consequential bottoms, reflecting a late-summer overshoot to the downside for both in a fit of global recession panic that now appears to have been premature and left most investors defensive and unprepared for a quick rebound.

Yet the relief rally that led to a surge in bond yields and cyclical stocks has receded a bit, and short-term gauges of investor sentiment became stretched, restraining the indexes in a narrow band in recent weeks. Restrained, but so far resilient: Dips have been shallow, with the index halting declines just below the 3,100 mark. For the past two weeks, the S&P has hovered in about a 1% range between 3,090 and 3,122.

The action resembles what occurred for a few weeks in September, when the S&P hugged the 3,000 level after a 6%, one-month rebound. It eventually gave way to a choppy 3% setback before a slingshot move higher into November, largely tracking reports of trade-deal progress or its lack.

Short-term trader sentiment has become a bit too bullish, arguably, with scant demand for downside put protection and the spread between bulls and bears in the weekly Investors Intelligence poll of advisory services reaching the upper end of its multi-year range — though nowhere near the giddy heights of January 2018..

The climb to new highs was sharp and persistent enough to make the major indexes overbought — meaning they had extended far above a longer-term trend, a sign both of impressive momentum and vulnerability to a quick setback.

This Bespoke Investment Group plot of the S&P 500 relative to its 50-day average shows the tape coming off the boil without much damage at all in terms of broad-market downside yet. 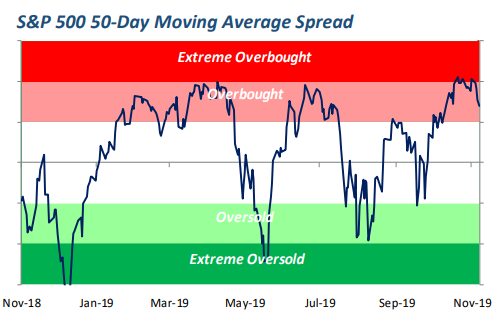 Canaccord Genuity strategist Tony Dwyer, who remains bullish on stocks heading into 2020, nonetheless has been looking for a downside jolt of somewhere less than 5% to reset sentiment and refresh buying appetites through lower prices.

“Over the past two weeks, the market has been correcting internally and it may finally begin showing up in the major market indices,” Dwyer notes.

Some corrections remain stealthy and subsurface, of course, sparing the marquee indexes packed with a mix of secular-growth and defensive stocks as well as industrials and financials.

Some leading engines of the risk-on run have slowed for sure. Semiconductor stocks went vertical and have reset lower by a few percent. Apple shares have recessed from an all-time high in recent days. Transportation and small-cap indexes, victims of the global-trade slowdown, sped higher off the late-summer lows but never quite pushed above the top of their longstanding trading ranges.

And 10-year Treasury yields are down a quick fifth of a percent in two weeks, to around 1.75%, as bond investors calibrate leading clues of industrial revival against still-sluggish manufacturing and GDP-tracking data. And risk spreads on junk bonds have stopped improving this month, now sitting at wider levels than they were two months ago when the S&P 500 was some 3% lower.

There has also been an undertow of selling beneath the index surface that has dragged broad-market breadth lower, with an uptick in the number of stocks making new 52-week lows, albeit also with plenty of fresh highs.

Willie Delwiche, strategist at R.W. Baird, points out the number of net new highs has retreated, without yet hurting the S&P 500. 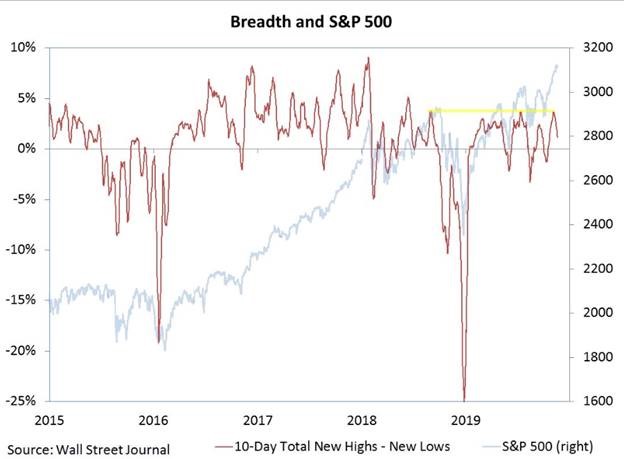 All this amounts to a fatigued, uncertain market, but one that has not yet seen heavy, determined selling even with the S&P 500 up 23% this year.

Nothing about this action has cost the bulls the benefit of the doubt — nor would a quick retreat. Any pullback of up to about 4% would do nothing to disturb the idea that the index has broken higher into a new advance.

The basis of the rally since August remains plausible: that economic and corporate profits growth is troughing, the Fed has eased deftly off the brake with three rate cuts, credit conditions are fine, the Treasury yield curve is back to a normal slope, seasonal forces are favorable and big investors underinvested and prone to chase stocks higher.

This remains the prevailing setup, as the market’s muted action prompts questions of whether this is a mere stutter-step on the march higher, or the start of a retrenchment that rekindles investor anxiety. Walls of worry are a good thing for bull markets to climb — even if they start as hazardous stumbling blocks.

Are digital wallets safe? Here’s what to know as the battle between big banks and Apple Pay heats up
Survey Finds That Service Members, Veterans Are Optimistic About Home Buying In 2023
Sam Bankman-Fried Bought This Washington DC Townhouse, Now For Sale At Exactly What He Paid For It
Cramer’s week ahead: Fed decision on Wednesday could let the bulls ‘party on’
Dementia Prevention: Do You Love Your Brain?