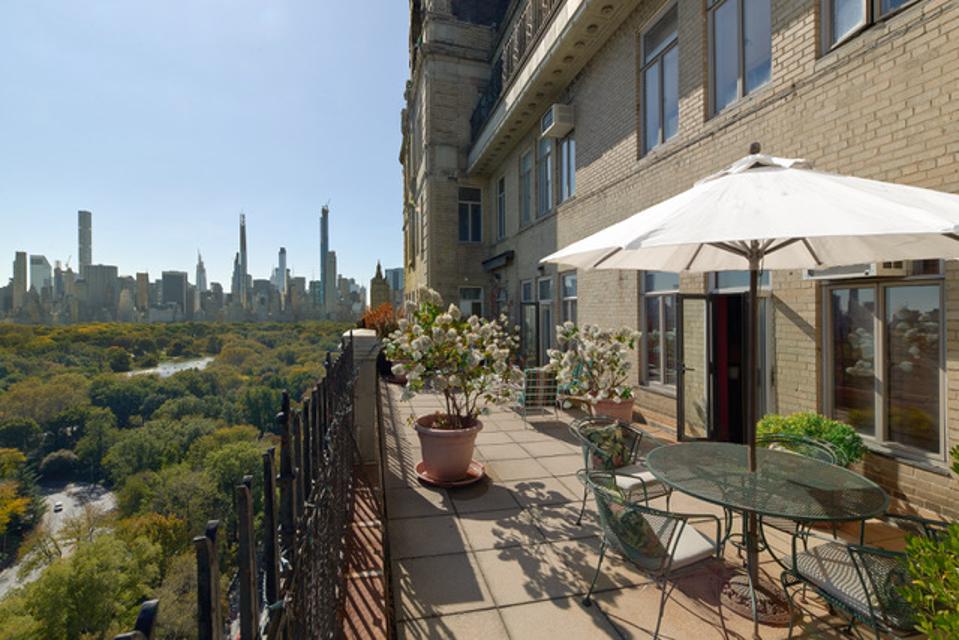 Broadway icons Phyllis Newman and Adolph Green lived at the Beresford at 211 Central Park West for nearly six decades. Green, a multiple Tony-Award winning lyricist and book writer, wrote the iconic film Singin’ In The Rain; Newman was a Tony-Award winning actor. While they shared the 10-room duplex, it was the “go to” spot where then next-door neighbors Issac Stern on one side, Glenn Close on the other, and friends Leonard Bernstein, Lauren Bacall, Betty Comden, Hal Prince, Stephen Sondhein, Mike Nichols, Sidney Lumet, and many other luminaries of the day gathered for parties and bonhomie. Ms. Newman, who was also a women’s health advocate, died in September at age 86; her husband died in 2002 at 87.

Now their home is on the market for $24 million, offered for sale by Cathy Taub of Sotheby’s International Realty.

Located in one of Central Park West’s landmark towers, unit 19E measures 3,300 square feet, with five bedrooms and four full baths. There is also a 600-square-foot terrace with panoramic views of Central Park and the Midtown skyline, described as “the best seat in New York City to watch the fireworks on New Year’s Eve.”

Little has changed in the grand co-op apartment since the couple moved there in the early 1960s. The rambling prewar layout designed by legendary architect Emery Roth remains intact, and the rooms are still adorned with photographs and personal memorabilia from a past time in entertainment.

The entry gallery leads to the library, adjacent to a full bath, and the 18’x29’ living room, which has a wood-burning fireplace and is lined with built-in bookcases. From both of these rooms, French doors open to the enormous terrace, which offers one of the greatest views in Manhattan. Also located off the gallery is a large formal dining room adjacent to a butler’s pantry, west-facing kitchen, and breakfast room. Two west-facing windows provide beautiful light and Hudson River views. A back stair provides a secondary and convenient access to the 20th floor.

Three huge en suite bedrooms and two smaller bedrooms are located on the upper floor, along with a laundry room and many spacious closets.

The Beresford, identified by its three towers, is one of the most exclusive co-op buildings on Central Park West. The massive Renaissance Revival style building overlooking the American Museum of Natural History was built in 1929.

Since then, it has been home to a long list of famous residents, including Beverly Sills, Rock Hudson, Tony Randall, John McEnroe, Helen Gurley Brown and Jerry Seinfeld, who lives with his family in what was once Isaac Stern’s apartment.

Southwest forecasts lingering losses as bookings slow in wake of holiday meltdown
Tesla reports record revenue and beats on earnings
Cramer’s lightning round: I say thumbs up to MP Materials
Generation X carries the most credit card debt, study shows. Here’s how to get those balances down
With a possible recession looming, here’s how to decide if you should to go back to school