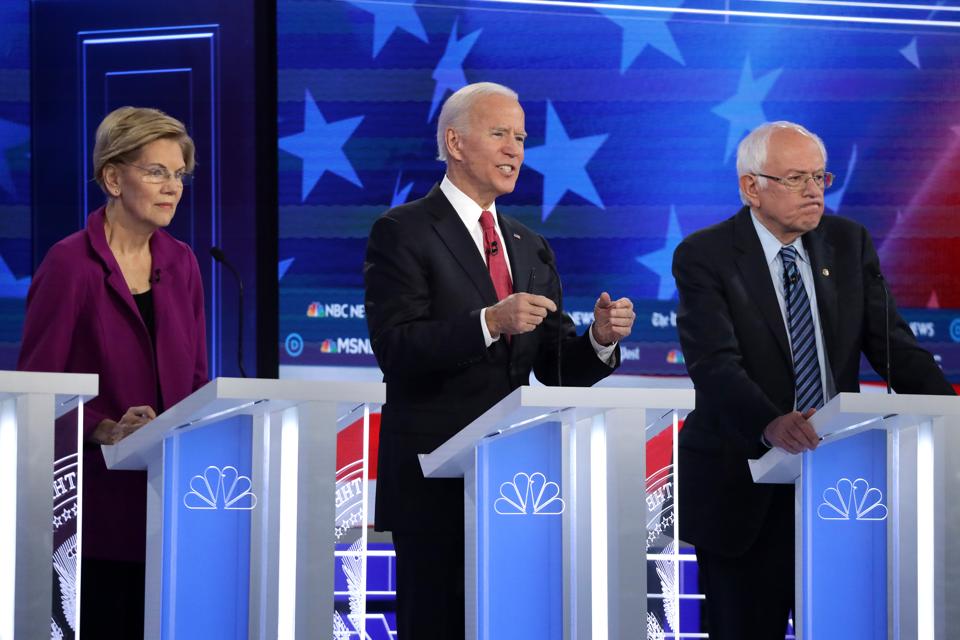 This election cycle, the wealth tax is hot. Social Security? Not. At least compared to the colossus the issue once was, straddling the presidential debate stage.

But the leading Democratic presidential hopefuls, nonetheless, haven’t been shy about calling for tax increases to feed the benefit, which is mostly paid out to retirees as well as a smaller number of disabled workers. Baby Boomers, who began turning 65 in 2011, have invested more of their retirement savings in stocks than previous generations, meaning market volatility attracts their attention—and potentially their vote—more than staid, boring Social Security. But unless changes are made to shore up the trust that funds Social Security, which provides the elderly some 33% of their income, payments to retirees face cuts once the program runs out of surplus in 2034, when the entire Boomer generation has crossed into their golden years.

Elizabeth Warren and Bernie Sanders say they want to increase benefit payments and expand taxable income that feeds Social Security. Joe Biden, also among the leading candidates seeking the Democratic presidential nomination, vows to “preserve and strengthen” the program, according to his campaign’s website, including providing a bigger monthly check for retirees who have been collecting the benefit for over 20 years. These proposals raise questions about how the system might be updated. The average monthly payment for retired workers is $1,471.

While corporate leaders like JPMorgan CEO Jamie Dimon have balked at wealth tax proposals, raising payroll taxes to boost Social Security has met less resistance. CFOs would likely face a payroll tax bump of a couple percentage points. Economists agree this would not weigh too heavily on most companies’ bottom line and possibly be passed onto employees as downward wage pressure.

Social Security raises funds with a 12.4% payroll tax, split between employees and employers. There is a cap, however, on how much money Social Security can extract from a worker’s income.

In 2019, the tax is applied to the first $132,900 in earned income. In 2020, the income cap will be $137,700. As the cap rises, more money flows into Social Security. But as income disparity widens, a shrinking percentage of total national income is tapped to replenish the Social Security coffers as top earners make far beyond the earned income ceiling. The annual limit increases are pegged to the national wage average index.

Warren also plans to levy the payroll tax on incomes over $250,000 while raising the rate to 14.8% from 12.4%. For CFOs and corporate leaders, passing the bill onto workers may be tempting, slowing salary hikes.

Current investment income is not subject to Social Security tax. Warren wants to change that and place a 14.8% tax on investment income for individuals making over $250,000 and families clearing $400,000. This proposal is consistent with her broader efforts to redistribute wealth, an aim she shares with Sanders that makes them lightning rods for the other side of the aisle.

Biden does not explicitly propose increasing the payroll tax cap. The candidates’ campaigns didn’t immediately respond to requests for comment.

In some situations, authorities can tax social security benefits of households where income climbs over certain levels. No candidate has proposed raising this tax on these high-income households. This approach would make the retirement benefit system more politically progressive but yield little in additional revenue for the government.

The more progressive Democratic candidates, true to their reputation, want to expand social programs. Warren supports an across-the-board $200 increase in monthly payouts. She advocates giving Social Security credit to caregivers who are not otherwise employed and tend to be female, allowing them to bank benefits. She also wants bigger payouts for widows reflecting a generation of women who may have stayed home and didn’t pay into the system.

Sanders favors a more modest increase of $108 a month for seniors with incomes less than $16,000 per year.

To keep people out of poverty, Biden would allow people over the age of 65 to receive the Earned Income Tax Credit, which they are not eligible for now.

Social Security has been drawn into the increasing scrutiny over widening disparity between the wealthy and lower income brackets. According to U.S. Census Bureau figures, the program is the nation’s most effective anti-poverty program, and in 2018 kept 21 million people above the poverty line, reducing the national poverty rate by 6.7% percent. It’s been vastly more effective than unemployment benefits, food stamps, or the earned income tax credit.

Payouts automatically increase along with the cost of living, as determined by the Consumer Price Index (CPI), a broad measurement of the cost of a basket of consumer staples.   Adjusting the automatic increases in payouts impact the solvency of the system. William Gale, a former White House budget economist under George H.W. Bush but considered a political centrist, outlines several ways to make Social Security solvent for 75 years, in his new book Fiscal Therapy.

Gale recommends using the so-called chained Consumer Price Index, in place of CPI alone, as a more accurate gauge of the cost of living. He says the standard Consumer Price Index overstates the rate of inflation. Such a change would “slightly reduce the growth rate of benefits,” he has written.

Sanders and Warren support the creation of an inflation index specifically for the elderly to account for what seniors consume, such as medical care, which is rising in cost more quickly than other consumables. Neither candidate indicates how this would affect payouts.

People are living longer with jobs becoming less physically demanding and healthcare improving, despite a brief downward trend in longevity caused by the opioid epidemic and the high cost of medical care. More retirees are living beyond retirement age meaning more payouts. The earliest Social Security benefits can be claimed is 62, with the amount of the benefit rising the longer a worker delays retirement and claiming the benefit. And if people remain in the workforce longer, Social Security would have fewer recipients.

Biden wants anyone who spends 30 years working to receive a Social Security benefit of at least 125% of the poverty level, guaranteeing $15,053 to anyone over 65 as an incentive for workers to delay retirement in hopes of easing the burden on the Social Security fund.

Warren and Sanders, however, don’t encourage workers to stay in the workforce longer.

What The Candidates Don’t Do

No Democratic frontrunner wants to raise the age at which individuals can collect full benefits. Gale recommends doing so, but allowing workers to continue to choose early retirement benefits. This is considered particularly useful for those who have worked in physical labor, or who have physical weaknesses, or who are pushed out of the labor force.

Here’s where the jobs are for January 2023 — in one chart
Why Mark Cuban avoids Silicon Valley: ‘Tech bros’ are ‘pretentious’ and overrated
A Closer Look At The National Sales Tax Proposal
Britain sets out plans to regulate crypto industry in wake of FTX collapse
Chewy’s push into pet telehealth runs into regulatory hurdles, skeptical veterinarians