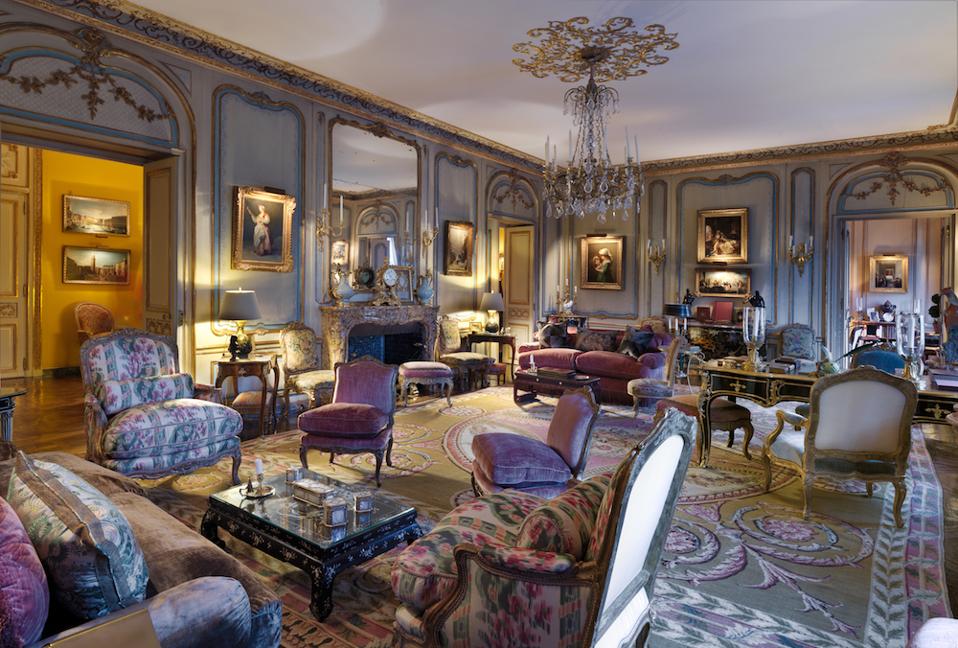 There is a sprawling full-floor condo/co-op available in the coveted 820 Fifth Avenue building that hasn’t been on the market for over sixty years. Residences in this 12-unit building are hardly ever for sale and even when they are getting past the co-op board has been known to be a Herculean task (both casino billionaire Steve Wynn investor Ronald Perelman reportedly had their applications turned down). Names that were able to successfully be approved to live here include hedge fund manager Ken Griffin and designer Tommy Hilfiger.

This unit belonged to Charles and Jayne Kirkman Wrightsman, philanthropists with wealth derived from the oil industry and a strong penchant for collecting and donating fine art. Jayne Wrightsman died in April 2019 (her husband died in 1986). Their name is behind the funds that support the eight Wrightsman rooms at the Metropolitan Museum of Art, where they were both trustees and have donated over 1,200 works of art plus tens of millions of dollars (including $80 million upon Mrs Wrightsman’s death).

The living room above is one of the 18 rooms in the 7,000 square foot home which includes six bedrooms and seven bathrooms. Here is the same room from another angle to show part of the unit’s 100-foot of frontage looking over Central Park.

The dining room showcases the parquet de Versailles floors and one of several marble mantles that were constructed in France during the 18th century. There are a total of seven wood-burning fireplaces in the unit. Ornate crown molding adorns the entertaining rooms.

An elongated gallery is where the couple displayed part of their extensive art collection. This is where they kept one of the jewels of their collection, a portrait of King Charles IX of France by Clouet.

A room currently used as a study gives another example of how the unit uses cleverly uses the wall space to showcase their art collection. In this case painted panels act as a frame-around-a-frame to given the artwork a dedicated space on the wall.

The unit comes with $23,729 in monthly maintenance fees and no mortgages are allowed for buyers in this building. For more info see the listing with John Burger of Brown Harris Stevens.

Portugal’s Top Residency Visa Options—And Who They’re Best Suited To
What is a ‘rolling recession’ and how does it affect consumers? Economic experts explain
How To Avoid The 5 Most Frequent Reasons Retirement Plans Fall Apart
Luxury developers in Los Angeles bet someone will pay record prices for these condos
27 Best Valentine’s Day Gifts For The Home In 2023