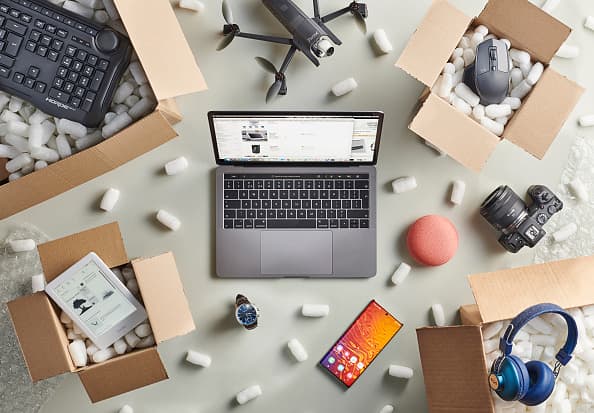 The $7.4 billion marked the biggest sales day ever for Black Friday and trailed only last year’s Cyber Monday’s $7.9 billion for the number 1 spot of all-time in online revenue, according to Adobe’s data. The average order value per consumer, at $168, was up nearly 6% year-over-year and also set a new Black Friday record. Adobe Analytics measures transactions from 80 of the top 100 U.S. online retailers.

“Small Business Saturday” has already seen $470 million in online spend, up 18% over last year, as of 9 a.m. ET. Sales are on pace to surpass $3 billion for the day, said Adobe.

“With Christmas now rapidly approaching, consumers increasingly jumped on their phones rather than standing in line,” said Taylor Schreiner, principal analyst and head of Adobe Digital Insights, in a statement. “Small Business Saturday will accelerate sales for those retailers who can offer unique products or services that the retail giants can’t provide.”

Online sales are up about 20% from last year, according to Adobe. The jump in cyber activity is a sign consumers are becoming more comfortable buying larger items at discount prices without going to the store. Adobe is still expecting spending on Cyber Monday this year to hit an even bigger record $9.4 billion, an 18.9% jump from a year ago.

Shoppers have already spent $4.2 billion online on Thanksgiving Day, a 14.5% increase from last year and a record high, Adobe said Friday. Some of the most popular purchased items include Disney’s “Frozen 2” toys, video games such as FIFA 20 and Madden 20, and electronics such as Apple Airpods and Samsung TVs.

California Passes Adaptive Reuse Legislation To Address Housing Crisis
Parents who missed out on the child tax credit of up to $3,600 have until Nov. 15 to claim it using a simple tool
Toyota CEO Akio Toyoda talks about why he isn’t all-in on EVs — and what made him do a ‘happy dance’
‘The Fed is breaking things’ – Here’s what has Wall Street on edge as risks rise around the world
Here’s how advisors are helping clients slash their 2022 tax bill