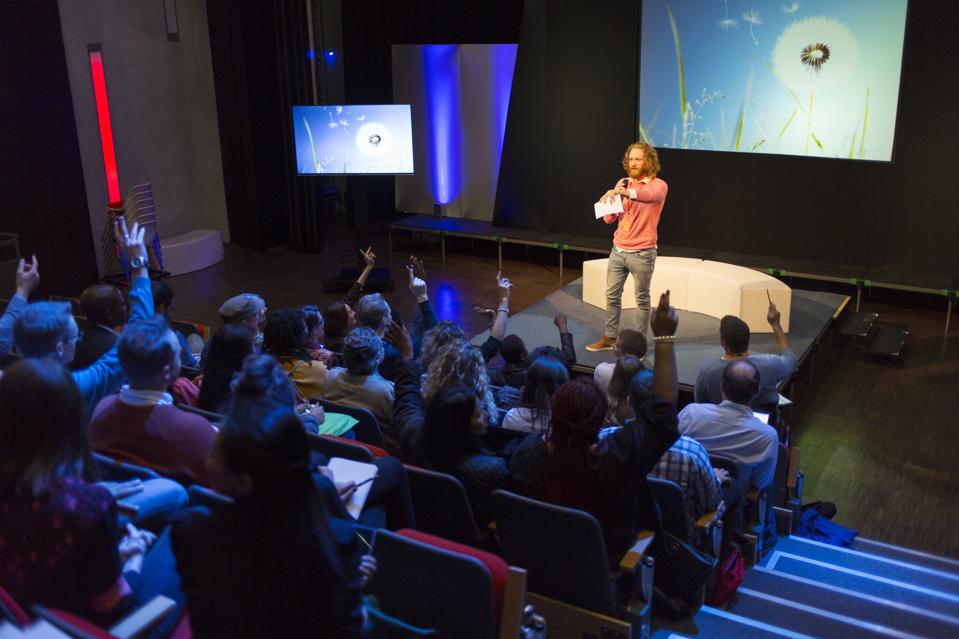 Recently I had the DIS-pleasure of sitting through an invitation-only panel discussion on a topic I was quite excited about. I was attending a very large conference focused on the senior housing industry. The meeting was billed as a state-of-technology breakfast and was sponsored by a company that develops creative solutions for older adults and individuals living with disabilities. Great, I thought. This is the kind of information I would like to know about, maybe write about.

I came away from the meeting having learned a few things about the state of the technology as it applies to senior living communities and older adults themselves, but I didn’t learn nearly as much as I had hoped. Why not, you might ask.  They had a very impressive panel, highlighted by a senior exec from Intel, but there were so many distracting issues that much of it was lost on me.

I came away feeling frustrated and decided that the best thing I could do with my frustration was to reveal the problems––just in case there is someone out there reading this who is planning on running a similar meeting at a conference in 2020.

Let’s start with the room itself.  The host company chose an off-site location for the meeting, which most people somehow managed to find at 7:00 in the morning in a strange city. However, the space was a wine cellar, which would have been terrific for a late-afternoon social event, but was not conducive to an early-morning panel because it was too small, too cramped, and too dark.  Possibly they chose it because it sounded sexy; although to give them the benefit of the doubt, maybe that’s all that was available in the area.

When I arrived, I first encountered a table with pre-made name tags. This was an excellent time-saving measure for the attendees, but actually didn’t end up saving much time at all since many of the name tags had inaccurate information. My name tag had both my first AND last name misspelled. To the company’s credit, they had a machine which instantly re-printed my tag, but it would have been entirely unnecessary had the information been input accurately in the first place.  After all, it was taken directly from the RSVPs that came in from the invitations. I’m pretty sure I didn’t misspell my own name on my response.

Once I had my correct name tag, I entered the room and, like most others, went straight to the food table. I loaded my plate with fruit and quiche and other goodies, then proceeded to the beverage table where, to my dismay, I discovered that the only hot beverage available was full-strength coffee.  Those of us who don’t drink caffeinated drinks were out of luck. Apparently, no one had thought of including decaf coffee or hot water for tea, doubly disappointing since the room was unheated. Sigh… I picked up a cold, bottled orange juice.

They evidently invited more people than the very-shallow room could comfortably hold, or maybe extra people got wind of the event and just showed up. The resulting crowding was a problem because they had also encouraged the panelists to use slides and unless one was  sitting directly in front of the small make-shift stage, it was impossible to see the images. Okay, I thought, I’ll just listen and take notes, but alas the room was too dark to see what I was writing.

I also felt rather sorry for the panelists. Instead of nice comfy chairs, they were perched on backless stools for the hour. Now, this may not be a problem for men, and those without any back problems, but it is definitely problem for women in skirts and anyone who has lower back issues. I watched them struggle to get comfortable, while trying also to keep knees together and sit up straight. I’m sure they were glad when it was over.

So, what is the lesson here? In my opinion, a sexy location does NOT trump comfort, visibility, and a properly functioning A/V system, appropriate for the room configuration. This lack of comfort is a distraction and the more distractions attendees have to manage, the less they are able to absorb and the less likely they will be attracted to your organization. It’s important to factor in the age and gender of the audience as well when deciding on a venue and choosing refreshments for a meeting, especially when the main purpose is marketing and raising awareness for your business.  Pay attention to details.  I doubt I’d want to do business with the host company for this meeting. I’m sure there are competitors out there who could spell my name accurately and put on a more comfortable and inviting opportunity to show me what they do.