Wall Street analysts tend to run in packs, with most stocks finding an informal consensus on Wall Street among this crowd.

But there are a few stocks which deeply divide analyst opinions — and, perhaps unsurprisingly, far and away the most controversial is Elon Musk’s electric automaker, Tesla. No stock has a wider gap than Tesla from the average analyst price target to the top and bottom targets, according to a CNBC analysis of FactSet data.

Tesla may be the most divisive stock on the Street, but it’s also not alone. Several top technology companies — Facebook, Advanced Micro Devices and Square — are counted among these battleground stocks, as well as ride-hailing companies Uber and Lyft and embattled industrial conglomerate General Electric.

Here are the top 20 most divisive stocks, according to analyst coverage of companies with a market value greater than $10 billion. 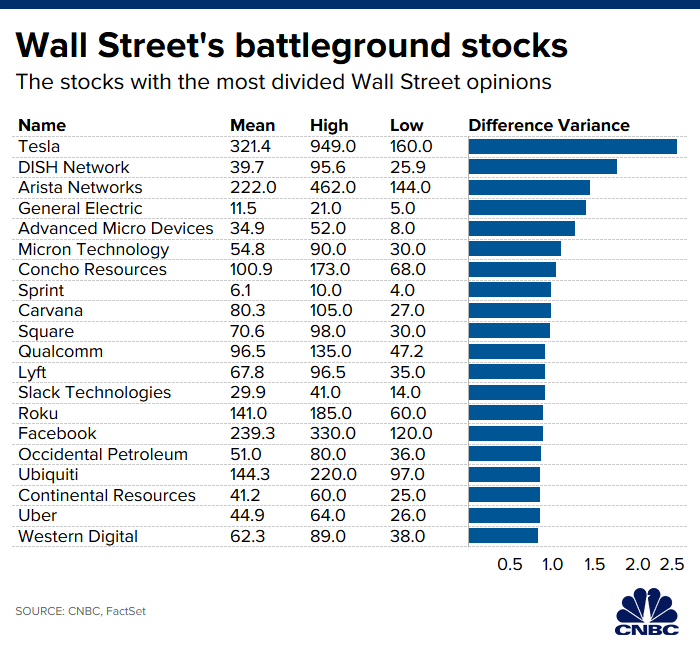 Jefferies recently gave Tesla one of the highest price targets on Wall Street, seeing the stock climbing to $400 a share. In a note to investors, Jefferies wrote that it sees Musk’s company stabilizing in 2019, with “a better foundation for a return to growth in 2020 revenue and earnings.” The firm also expects Tesla to maintain “its edge in product, affordability and technology” next year, saying it sees the company on a path of “sustained profitability.”

But UBS, one of the biggest Tesla pessimists, expects the company’s stock will lose half its value in the next year. UBS said in a recent note that it sees a broad slowdown in discretionary spending as a “key risk” to automakers, expecting Tesla to struggle from an “inability to deliver on battery cost reduction and performance,” as well as threats to its battery supply chain and changes to how electric vehicle’s are regulated.

General Electric’s stock has had a strong year, up more than 50%, and William Blair believes shares will climb even higher. The firm is the most optimistic on GE’s stock, telling investors after the company’s third-quarter results that GE “continues to execute well while flying above geopolitical turbulence,” with “irrefutably lots more to come.” William Blair expects GE to “finish 2019 strongly,” with a price target of $15 implying another 35% rise in the stock.

J.P. Morgan, on the other hand, staunchly remains the biggest GE bear. Since warning investors of GE’s stock plunge three years ago the firm has been Wall Street’s sharpest critic of GE, and currently has a $5 price target. J.P. Morgan said in a recent note that it does not believe that GE’s “management has set a bottom” for the performance of its businesses, adding that “GE is missing guidance on core business EBIT that was set in March.”

Similar to GE, social media giant Facebook is having a stellar year with its stock up nearly 55%. Mizuho Securities has Facebook as its top pick among internet stocks, saying after Facebook’s recent quarterly earnings that the company’s “pragmatic approach” to regulation will help it ride out political concerns and expecting Facebook to improve key products such as online payments in 2020.

A Resilient Economy Faces Substantial Policy Risks
Single Women Are More Likely To Own Homes Than Single Men In Nearly All States
As interest rates climb, here’s why proposed caps on debt may not help reduce costs for consumers
When Life Gets In The Way Of Your Retirement Plans
Managing Homes, Dollars, And Building Codes As They Go Up In Wildfire Flames