Traders work on the floor of the New York Stock Exchange on August 14, 2019

It’s December, markets are dropping and it feels like we’ve been here before.

Stocks dropped the first two trading days of December and investors are having deja vu. The Dow Jones Industrial Average tumbled nearly 270 points on Monday and continued to fall more than 400 points on Tuesday after President Donald Trump suggested he may want to delay a trade deal with China until after the 2020 presidential election.

Alongside the suffering markets, the CBOE Volatility Index, a gauge for investor fear, jumped more than six points above the 17 level, after being stable and range bound for most of November. 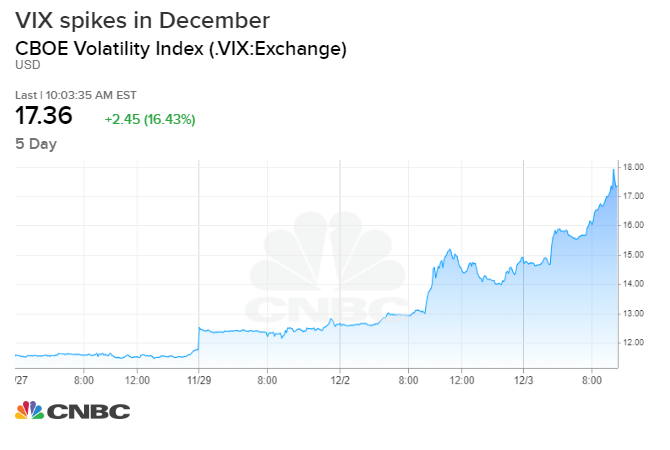 Investors are now having flashbacks to last year, when the market suffered its worst December since the Great Depression amid the intensified U.S.-China trade war and a rate increase from the Federal Reserve, with the major stock averages briefly dipping into bear market territory on an intraday basis. The VIX spiked above the 36 level in December 2018.

In case fears that last December will repeat itself become a reality, CNBC screened for the best places to hide out when volatility spikes. 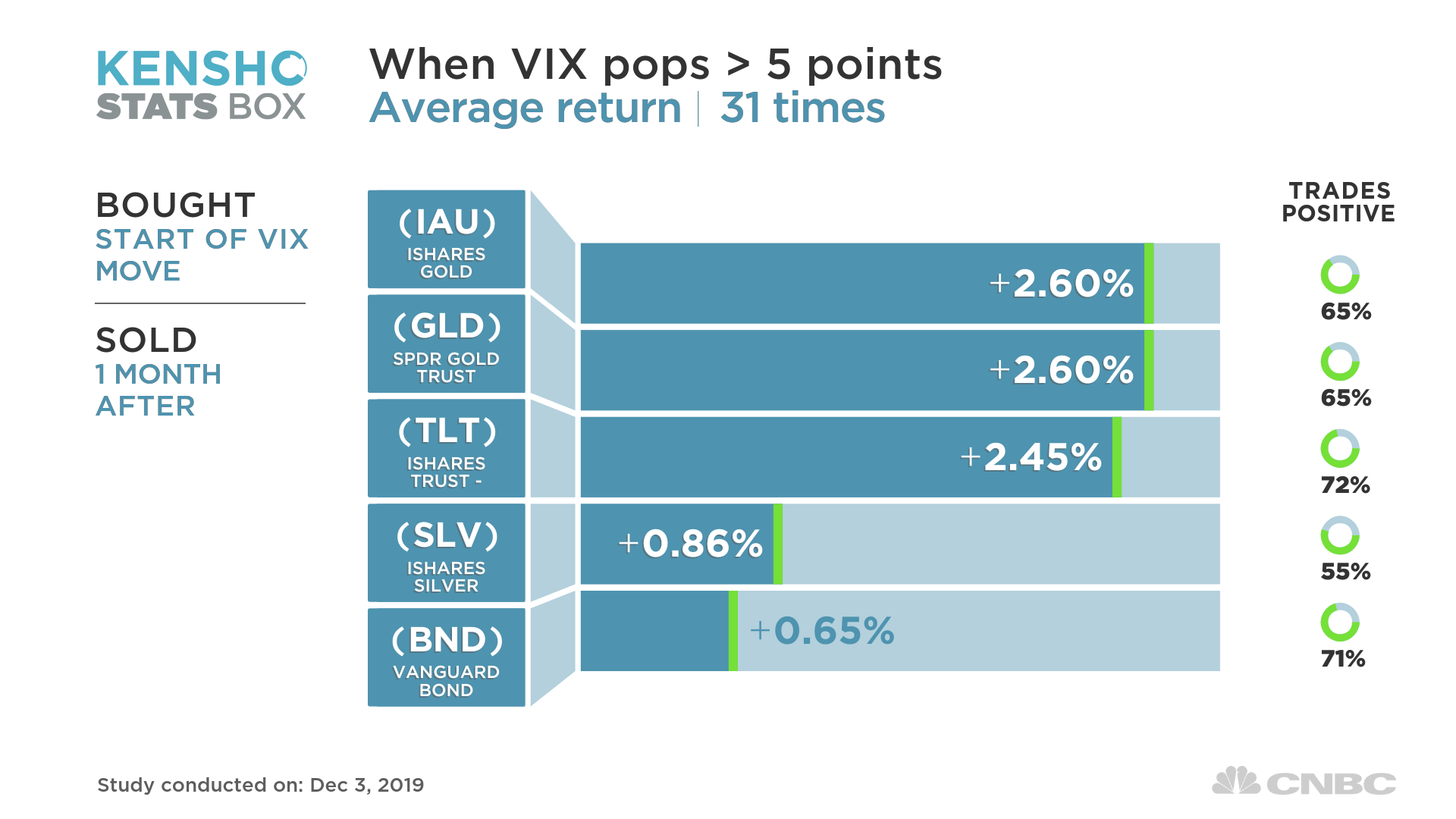 CNBC used Kensho, a hedge fund analytics tool, to track the top exchange-traded fund performers when the volatility index, a measure of the 30-day implied volatility of U.S. stocks, popped five points or more in a month.

The iShares Gold Trust ETF (IAU) and the SPDR Gold Shares ETF (GLD) are the best performing ETFs during months when volatility spikes, trading positive 65% of the time and returning an average of 2.6% if you buy when the VIX starts to move and sell one month later. Gold is seen as a safe haven and store of value during times of a economic uncertainty and increased geopolitical tensions.

As a proxy for bonds in times of economic uncertainty, the iShares 20+ year Treasury Bond ETF (TLT) and the Vanguard Total Bond Market ETF (BND) are also a strong performers following a spike in volatility, with an average 2.45% and 0.65% return, respectively.

The iShares Silver ETF (SLV) earns an average of 0.86% when the VIX pops and has the highest probability of trading positive. 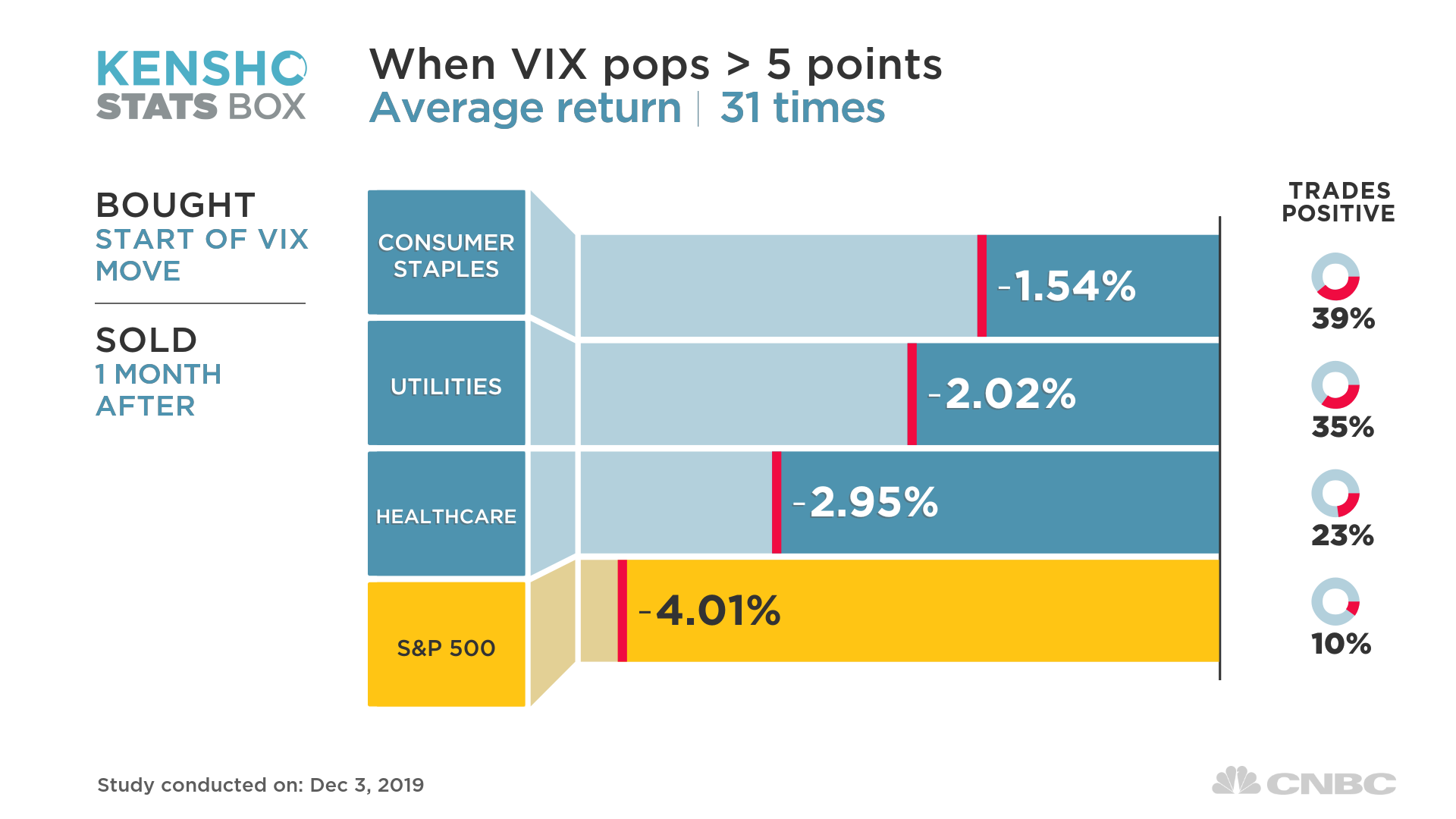 CNBC also used Kensho to screen which sectors perform the best when the VIX jumps five or more points. If investors buy the S&P 500 when the VIX starts to move and sold one month after, the average return is negative 4.01%. Consumer staples, utilities and healthcare are the best sectors to hide out in, with the highest likelihood of beating the market. However, historical data show, these sectors still lose investors money.

Consumer staples on average drop 1.54% and trade positive 39% of the time after the VIX spikes five points. Morgan Stanley backed up Kensho data with its big call for consumer staples on Monday. Chief U.S. equity strategist Michael Wilson told clients in a note Monday that expectations of “disappointing” S&P 500 earnings next year should allow companies like Coca-Cola and McDonald’s, both of which promise better-than-average earnings potential and free cash flow, to outperform the broader market.

Utilities usually drop about 2% following a spike in volatility, beating the overall market. Utilities are generally more stable stocks, as demand for electricity and gas is a steady consumer and business need. And the shares pay above-average dividends.