Two years ago, Starbucks’ midseason addition to its holiday lineup was the Christmas Tree Frappuccino. But since then the coffee chain has turned its focus from the heavy blended drink to lighter iced drinks that entice customers to return to cafes.

Despite dropping temperatures, cold beverages continue to be popular with Starbucks’ customers. They make up more than half of Starbucks’ U.S. sales. The company has rolled out Nitro cold brew to all of its U.S. locations and introduced new flavors of popular iced drinks such as Refreshers.

But Starbucks is also betting on flavored cold brew as the caffeinated beverage gains steam with coffee drinkers. 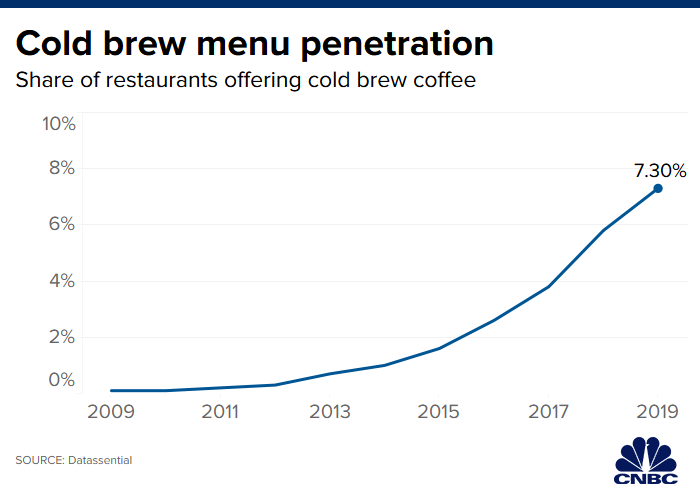 Cold brew now appears on 7.3% of U.S. menus, up 356% over the last four years, according to Datassential. Customers spent $1.7 trillion on cold brew last year, according to Technomic.

Dunkin’, Panera Bread and Dine Brands’ IHOP are among the national chains that have also jumped on the trend. Dunkin’ has even offered its own Irish Creme cold brew in the past, timed for St. Patrick’s Day.

Nearly a third of cold brew drinkers buy the beverage during lunchtime, according to Technomic. For coffee shops, that’s good news. Sales slow down after the busy morning hours, and luring customers back without relying on too many discounts can be difficult. Cold brew is also usually pricier than the average iced coffee.