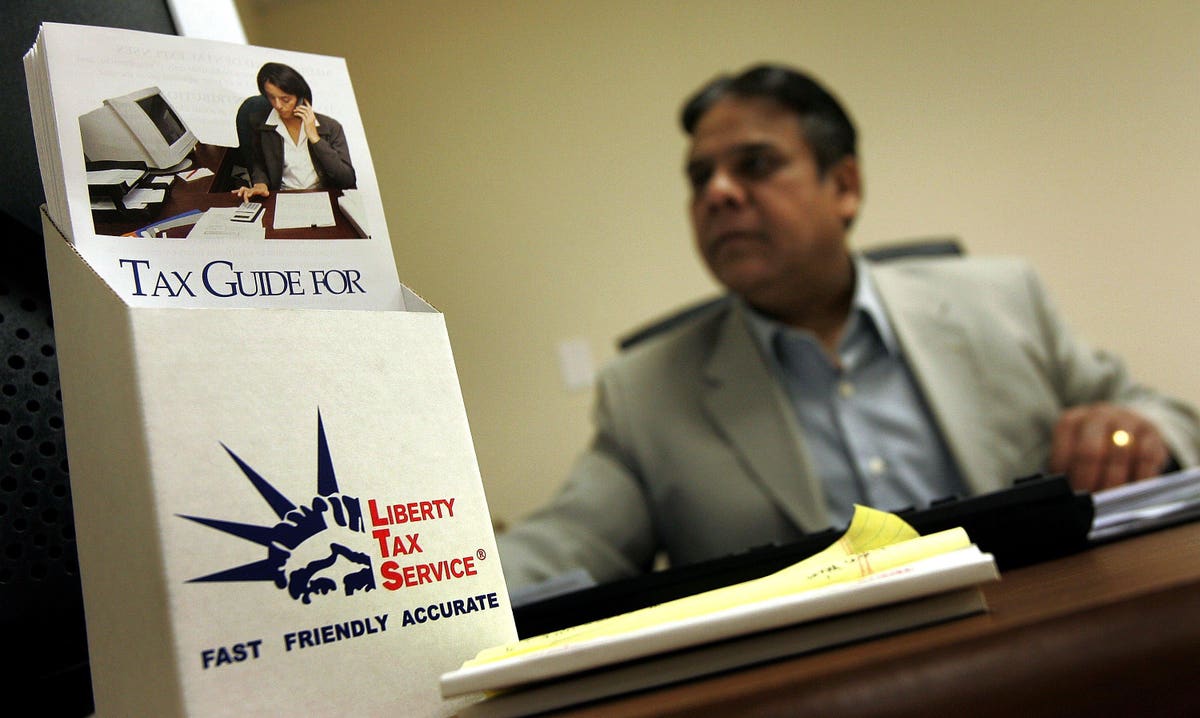 Tax return preparation service Liberty Tax
TAX
is being sued by the District of Columbia for allegedly cheating customers by luring them with a cash bonus program, while secretly increasing their preparation charges.

The lawsuit feeds into a long-running debate over whether there should be better federal regulation of the tax return preparation industry.

During filing season, tax return preparation services routinely offer tax refund advances that enable customers to receive part of their tax refund ahead of time, sometimes in the form of a no-fee, no-interest loan, and sometimes with fees attached. But the incentive at the heart of the Liberty Tax lawsuit is different.

The incentive, called “Cash in a Flash” offered customers $50 for filing their tax returns early with Liberty Tax.

On September 21 D.C. attorney general Karl Racine filed a complaint against Liberty Tax alleging that the Cash in a Flash perk is misleading and violates D.C.’s consumer protection laws because participants wind up paying more for return preparation services than nonparticipants.

According to the lawsuit, Liberty Tax issued over 12,000 Cash in a Flash incentives to D.C. taxpayers between 2015 and 2021. On average, those customers paid Liberty Tax between $67 to $200 more for tax return preparation services than nonparticipating customers, even when controlling for different types of preparation forms, according to the complaint.

“This practice was no accident, as Liberty Tax expressly directed its franchisees, through written instructions, to raise prices for consumers who receive [Cash in a Flash],” the complaint says.

Much of that activity disproportionately affected lower-income customers, who are more likely to be early filers and take advantage of Cash in a Flash, according to the complaint.

For example, up to 98 percent of early filers at one D.C.-based Liberty Tax location participated in Cash in a Flash over the past several years, the attorney general said. Further, filers who received the earned income tax credit – which is offered to low- and moderate-income taxpayers — experienced the largest jump in fees and paid up to $200 extra.

The D.C. attorney general wants to permanently enjoin Liberty Tax from engaging in deceptive and unfair conduct that violates the district’s Consumer Protection Procedures Act, as well as pay restitution and civil penalties.

In the meantime, the attorney general is encouraging lower-income taxpayers to take advantage of free tax assistance programs offered through the IRS and other organizations.

For decades, the IRS has offered free basic tax return preparation to lower-income taxpayers through the volunteer income tax assistance program. That program is available for taxpayers who generally earn no more than $58,000, individuals with disabilities, and limited English-speaking taxpayers.

Another program, tax counseling for the elderly, offers free tax help to those aged 60 and above. The IRS, through a public-private partnership, also maintains an online filing program, Free File, which offers free, guided tax return preparation for taxpayers whose adjusted gross income is $73,000 or less. Taxpayers earning more than that can use Free File to file their own tax returns for free, but they’re ineligible for free guided preparation.

But those programs cover only a fraction of taxpayers, and oversight of paid tax return preparers (those who aren’t credentialed as attorneys, enrolled agents, certified public accountants, etc.) is an ongoing issue for the federal government.

The problem is that the IRS lacks the authority to regulate paid tax return preparers, despite bipartisan support for that kind of oversight. However, much of the discussion has centered around minimum competency requirements for paid preparers, which is a different set of issues than the ones alleged in the Liberty Tax complaint.

In June 2021 lawmakers introduced a bipartisan bill, the Taxpayer Protection and Preparer Proficiency Act of 2021 (H.R. 4184), which would require that paid tax return preparers take a one-time competency exam, submit to a background check, and complete annual continuing education. That bill basically would resurrect the IRS’s registered tax return preparer program, which was created in 2011 and later invalidated; however, it has stalled since being introduced.

While those proposals are important, discussions about the regulation of federal tax return preparers should be broader. They should consider other potential vulnerable points in the relationship between return preparers and their customers, such as customer incentives, perks, and fees.

It’s a discussion that’s happening in the state context: New Jersey, for example, recently passed legislation prohibiting tax return preparers from advertising refund advances as free or no cost if those services are accompanied by higher or additional fees.