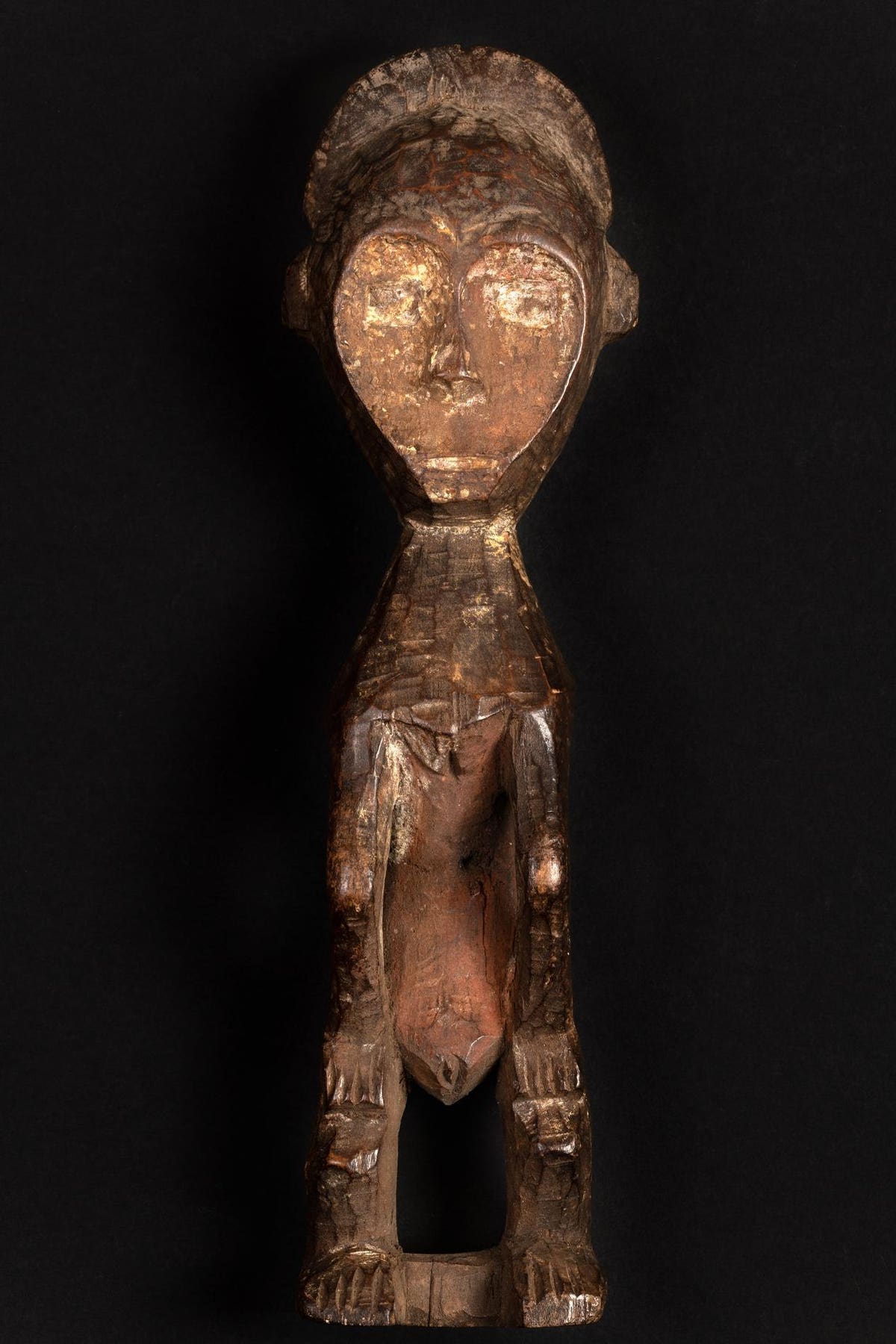 Earlier this month, Heinrich Schweizer got bad news from my favorite Tax Court judge Albert Lauber, “Scholar Al” as Lew Taishoff has dubbed him. Lauber ruled that Schweizer’s failure to meet the disclosure requirements for a charitable contribution of property was not “due to reasonable cause”. The opinion illustrates Reilly’s Fourth Law of Tax planning – Execution isn’t everything, but it’s a lot – with a shoutout to the Seventh Law – Read the instruction. The larger story behind the story of the piece of art given to the Minneapolis Institute of Art at a $600,000 valuation is inherently more interesting than the tax story, but that is the curse of being a tax writer.

You can see the gift here – a wooden sculpture of a male figure originating from the Dogon people of Mali estimated to be about 250 years old. It is less than two feet tall. The gift was in honor of William C. Siegmann who had been a Curator of the Arts of Africa and the Pacific Islands at the Brooklyn Museum. Siegmanm, who died in 2011, had fallen in love with African Art while a Peace Corps volunteer in Liberia in the mid-sixties.

Schweizer is an authority on African art. Before founding his firm Schweizer Premodern, he was Director of African and Oceanic Art at Sotheby’s. During his tenure, the value of Sotheby’s annual auction of African art went from $2 million to $55 million.

According to the opinion, Mr. Schweizer had acquired the Dogon sculpture “allegedly” in Paris for $100,000 in 2003. Somehow this disturbed me and sent me down something of a rabbit hole. I mean “Why Paris?”. You can get the short answer from this 2012 piece by Dr. Kwame Opoku – More Dogon artefacts are in the Musée du Quai Branly than in Mali’s national museum.

“Malian cultural heritage has for several decades, undergone a massive transfer toward Europe and the United States. Analyzing the phenomenon in its universality, it seems very clearly to be the translation of an unequal relation between poor (weak) and wealthy (powerful) nations. The cultural assets of poor nations are being exported to rich nations. Examples to the contrary do not exist”.

This issue has become more and more prominent as you can see from this story by Jason Farago about President Marcon speaking about temporary or permanent restitution of African art in French collections. On Schweizer’s watch in 2010 Sotheby’s cancelled a sale of a Benin ivory pendant mask amid allegations that it had been looted during the Benin Expedition of 1897.

The Return And Audit

Out of professional courtesy I will not name the not very large firm that among other things focuses on foreign nationals or the enrolled agent that works for them that handled Schweizer’s return. I will just refer to them as the firm and the preparer. Schweizer, an immigrant from Germany, hired the firm to prepare his first US tax return in 2007 and was still with them for his 2011 return.

In June of 2012 the preparer helped Schweizer request a Statement Of Value from the IRS. This puts the valuation in the hands of art experts (AAS unit), who don’t know whether the valuation is being done for a charitable donation, where the taxpayer wants the value high, or for transfer tax purposes, where the taxpayer want the value low. The package that went to AAS included an appraisal coming in at $600,000 but the appraiser’s qualifications were dubious.

They had not heard back from AAS by the time the return was due so the return went in with a $600,000 deduction. The required From 8283 was a mess:

The Form 8283 appended to petitioner’s 2011 return was missing most of this information. The Dogon sculpture, for which a $600,000 value was claimed, was listed on section A of the form, where taxpayers are instructed to report “Donated Property of $5,000 or Less and Certain Publicly Traded Securities.” On the line calling for a “[d]escription of donated property,” the words “SEE ATTACHED” appeared. But no such attachment was included in the return. Section B of the form was left entirely blank; petitioner thus supplied no information as to the acquisition date or manner of acquisition, and he failed to supply a summary of the sculpture’s physical condition. The signature lines, where the appraiser and an MIA officer were supposed to affix their signatures, were left blank. And petitioner did not attach to his return an appraisal of the artwork as required by section 170(f)(11)(D) for gifts valued in excess of $500,000.

There is dispute about whether Schweizer came to the firm’s office to sign the return of had it sent to him. More significantly is the dispute over whether Schweizer discussed the Form 8283 with the preparer. In Schweizer’s version he noticed the issues and the preparer told him that there was nothing to worry about because of what had been sent in with the request for a Statement Of Value.

IRS selected the return for audit. In its notice of deficiency the primary position was that no deduction at all was allowed due to failure to satisfy statutory and regulatory substantiation requirements. The secondary position was to reduce the deduction to $250,000.

Judge Lauber had ruled on summary judgment that Schweizer had failed to meet the disclosure requirement having failed to attach either a fully completed Form 8283 or an appraisal of any kind. What remained to be determined was whether the failure was due to “reasonable cause”.

Schweizer’s position was that he relied on the advice of the preparer that it was unnecessary to include the appraisal or a fully complete Form 8283. Judge Lauber found no credible evidence for that advice having been given and further that it would have not been reasonable to rely on that advice if it had been given. The preparer did testify and his testimony did not substantiate Schweizer’s testimony. Of course his memory of what exactly had happened eleven years ago trying to push out one more return as October 15 loomed was not that sharp. Judge Lauber gives the profession a lot of credit, perhaps more than we deserve when it comes to that crunch time.

And if petitioner had (as he testified) brought the defective Form 8283 to ——————- attention, we find it implausible that ————-. ————, an experienced return preparer, would not have retrieved from his files the substantially complete Form 8283 that he had previously submitted to the AAS unit.

Judge Lauber goes on to note that this was not Schweizer’s first 8283 rodeo so even if the preparer gave him the bad advice, he should have known better. So no deduction.

I don’t know how long it usually takes to hear back from the IRS on art valuation, but it would seem that the wise thing to do is to give them as much time as possible, if you are going that route. This is of course one of many opinions that emphasize the importance of meticulous compliance with donations of valuable property. It is also a rather strange story in that Schweizer’s counsel did not seem to be able to craft a narrative that would have his and the preparer’s stories line up. We will probably never have a way of finding out, but I have to wonder if the firm’s malpractice carrier is sweating this out now.

Michael Auliso did an interview with Schweizer in 2012 that is available on Tribalartcollector.com.

It is kind of ironic, given the name of the publication that Scweizer remarks:

What amazed me when I entered this field was that most people were still calling it “tribal art.” ………….There is no doubt that the term “tribal” is a historically contingent or quasiimperialist remnant of the colonial era. It is the result of a Western imperial perspective with condescending overtones and reveals a unilateral view on civilizational progress.

Matthew Erskine has How To Avoid Losing A $600,000 Charitable Deduction on forbes.com.

It may seem unfair to deny a deduction just because a form was not filled out correctly, and perhaps it is, but it is not unfair to require that when you do sign a tax return, you have exercised at least ordinary care and prudence in what you are claiming in that return.

Ever have a witness tell you not to call him, because his testimony would sink your client? Oh yes.