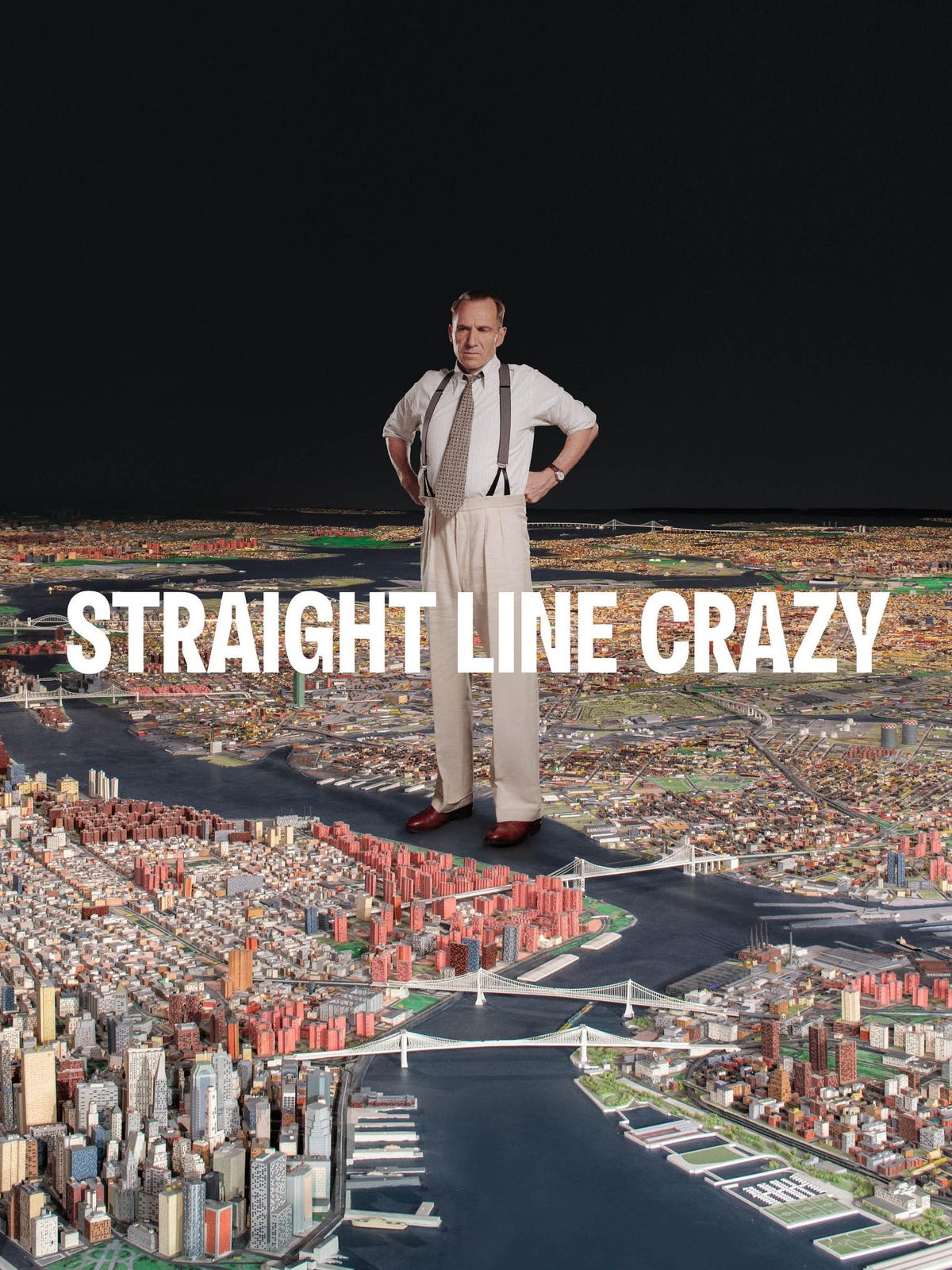 Urban planners are used to being ignored by the larger public, media, and culture. So it’s shocking that New York theater’s hottest ticket isn’t “Hamilton”, or the Michael Jackson musical, but The Shed’s production of “Straight Line Crazy”—a play about New York’s controversial urban planner and master builder Robert Moses.

Written by award-winning British playwright David Hare (“Plenty”), “Straight Line Crazy” sold out its entire run very quickly, with tickets reportedly being resold for up to $2000. The play is wildly entertaining while also raising big questions about cities, urban development, and democracy.

Academy Award nominee Ralph Fiennes plays Robert Moses, dominating the play, with most of the other characters foils to reflect Moses’ drive for power and domination. (The title comes from Moses’ alleged penchant for drawing straight lines between two points for a highway, and then bulldozing everything in between.)

The two-act play first shows a young Moses in the 1920s fighting (and winning) against old WASP money to build Long Island’s Southern State automobile parkway. It then shifts to the 1950s, with a mature Moses fighting (and eventually losing) over a four-lane sunken highway through Greenwich Village’s Washington Square Park, part of his never-realized master plan for three expressways across Manhattan.

In the play’s printed text, Hare says he used just those the two moments because “Moses’ life is so prodigious and his reach so great” that the play focuses “on just two decisive moments in his extraordinary career.”

“Extraordinary” is an understatement. In Moses’ career, he helped bring the United Nations to New York, built Jones Beach, 416 miles of parkways, 658 playgrounds in the city, millions of acres of state parklands, the Brooklyn Battery and Queens Midtown Tunnels, vast amounts of public housing and the Verrazano Narrows, Whitestone, Throgs Neck, and Triborough Bridges.

Caro’s unambiguous subtitle—“The Fall of New York”—and his book, set Moses’ image as a megalomaniac and racist power seeker riding roughshod over neighborhood and democratic voices, foisting a car-dependent infrastructure on New York and other cities. But Moses’ defenders (there are more than you might think) point to the slums he razed along with the vast infrastructure he built, viewing him as a particularly dramatic case of how American cities and metros came to grips with the automobile and suburbs.

The power-seeker dominates Hare’s play, with Fiennes (in a masterful performance) having most of the lines while strutting and posing on the stage. Jacobs and other characters serve as foils speaking for democratic processes and small scale, anti-automobile urban neighborhoods. The play elevates Jacobs as Moses’ opponent in the spirit of Caro’s attack, although Jacobs and Moses never met, and Caro doesn’t mention Jacobs in his huge book. (He dropped a chapter featuring her when he had to cut 300,000 words out of his original manuscript.)

Moses kept in power partly by understanding municipal bond markets. Using financial surpluses generated by tolls from the Triborough bridge, Moses re-financed bonds and issued new ones, adding bond covenants that guaranteed his continuing powers. As long as there were outstanding bonds, Moses had legal and financial backing for his authority.

Counterposing Moses’ autocratic style with calls for “democracy” and letting “the people” decide on development, a casual play viewer might think those forces eventually halted Moses, not only in the Village but elsewhere. But it took two Rockefellers—Governor Nelson and his brother David, chairman of the Chase Manhattan Bank—to finally break Moses.

Nelson wanted Triborough’s surplus revenues to help the deficit-ridden Metropolitan Transit Authority, and his brother’s bank was trustee for many Triborough bondholders. Together, these two rich and powerful leaders, not a neighborhood coalition led by Jacobs, maneuvered Moses out of power.

At the play’s end, Hare invites us to reconsider Moses’ legacy. The Jacobs character notes she was trying to save working-class housing, but the city ended up with Soho and Tribeca, some of the most expensive luxury real estate in the world. An idealistic young planner defends democracy to Moses, but at the end notes she now goes to endless community meetings where nothing gets approved or built, and wonders if Moses’ autocratic approach might be needed.

These are vital questions as we struggle with America’s deteriorating infrastructure, our difficulties with building anything while litigation and seemingly endless review processes delay or stop necessary projects, and our overdependence on cars and the environmental, climate, and racially unequal impacts of suburban sprawl.

We’ll never go back to the autocratic days of Robert Moses. But the play is a thought-provoking drama about cities, and how big things can get accomplished—or not—in our democracy.