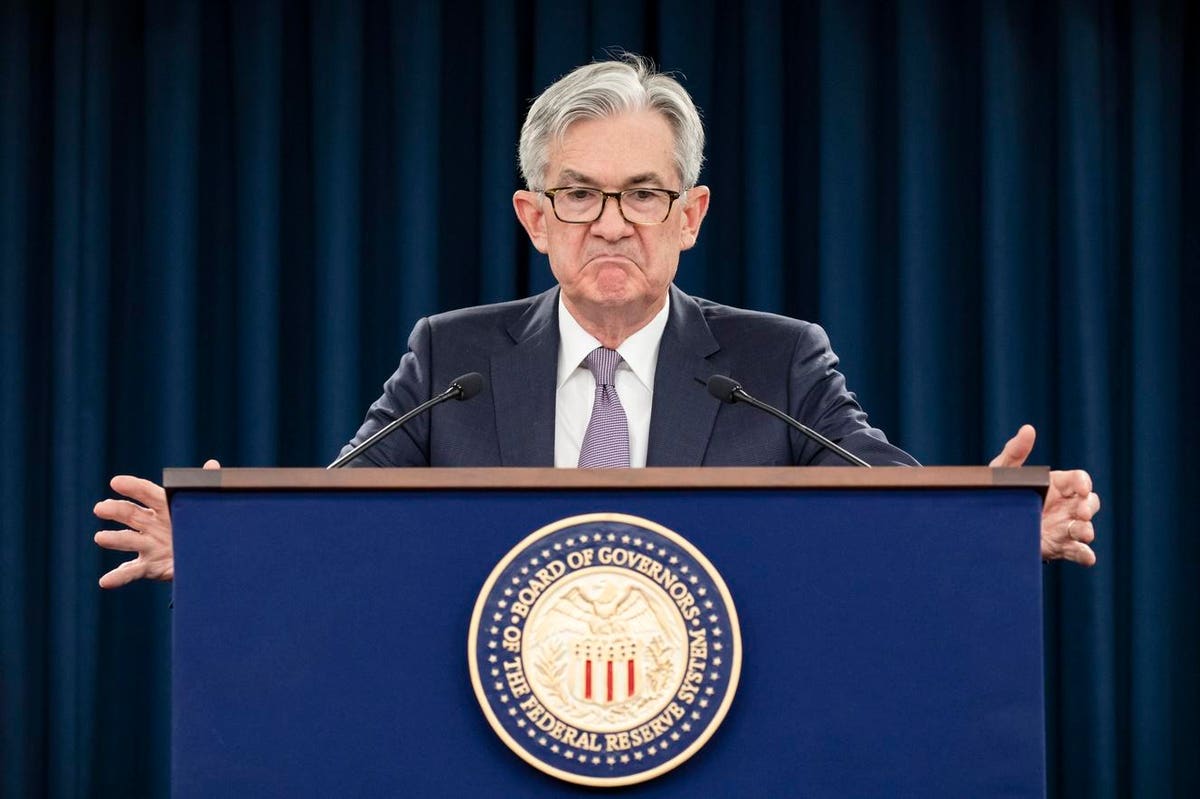 As was expected, the Federal Reserve raised the base interest rate by 0.75 percentage points this week for the fourth time in a row. That’s a monumental increase in such a short space of time, as chairman Jerome Powell battles with levels of inflation not seen in decades.

Even with that as a backdrop, and with the latest inflation figures showing hardly a dent has been made in bringing their levels back down, Powell stated that the Fed may look to slow the pace of rate increases.

On the face of it, that’s a little strange. Particularly when taken in context of his comments over recent months, that the Fed would use all the tools at its disposal to bring inflation back down to the target range of between 2 – 3%, from its current position at 8.2%.

But that’s not all.

On one hand, Powell stated that the Fed was likely to slow the pace of rate increases. On the other hand, he also said that interest rates are likely to peak at a higher level than they had originally forecast.

Confused? Don’t worry, we’re going to explain what all this means, but the main point it highlights is that the Fed is walking a tightrope right now. 100 floors up. Without a harness. During a thunderstorm. Balancing the national economy on its shoulders.

How much did the Fed raise interest rates?

As mentioned above, the Fed has increased interest rates by 0.75 percentage points. The increase marks the fourth hike in a row at that level and marks a rapid turnaround from the low interest rate environment that has existed since the 2008 financial crisis.

The base rate now stands at a target range of between 3.75 – 4% and represents the largest upwards interest rate move since the 1980’s.

So with such a sharp and decisive trend and inflation still at record highs, why has Fed chairman Jerome Powell stated that rate hikes may slow down.

Powell has made it clear that cutting inflation is the prime objective of the Fed. But that’s not the whole picture. Inflation is a hugely damaging force to the wealth of a country and its people, but hiking rates hurts the economy as well.

The whole aim with increasing rates is to slow the economy. A higher base rate means interest rates for debt goes up. Mortgages, credit cards, personal loans and student loans all increase, which means that households have less money to spend on goods and services.

Less spending means less demand, which slows business growth and stagnates wages and expenses. All of this helps to keep a lid on prices, or in this case, hopefully bring them down.

Not only that but raising rates also makes saving money more attractive, with bank accounts and savings products also tied to the Fed’s base rate. With super low rates, savings accounts and CD’s seem like a bit of a waste of time, which discourages saving and leads to higher spending.

As rates start to creep up, all of a sudden consumers start to think twice about spending all their spare cash and instead look to pick up some extra interest from the bank.

That’s all well and good in normal times. Generally inflation runs hot when the economy is booming. You can see from the chart below that before now, the highest level of inflation over the past 25 years was just prior to the 2008 crash.

In the good times, spending is high, pay rises are plentiful and cash is flowing. That mean’s households tend to have some spare time to play with when the inevitable rate rises come. Now 2008 didn’t follow that playbook due to the economic crash which halted the party, but without that the Fed would have been forced to raise rates to slow the economy.

In fact, you can see that’s exactly what they did in the years leading up to 2008, in an attempt to slow the runaway economy.

The problem right now is that the economy has not been booming. At least not in the traditional sense. Much of the current problems with inflation stem from supply chain and logistical problems that have come off the back of the covid pandemic.

Factories have shut down, there are lengthy delays with global transport and there is now a huge backlog of orders being worked through. All this at a time when the world of work has changed for many, with remote options becoming more popular than ever before.

Households are already under a lot of pressure, and while unemployment remains low and consumer sentiment is holding up surprisingly well, there is the constant threat of a recession looming over the country.

So the Fed and Jerome Powell are stuck between a bit of a rock and a hard place. They need to raise rates to bring inflation back down, and they can’t ignore that because it is still crazy high. But they also need to try to avoid crashing the economy, which raising rates could do.

Which brings us to Powell’s comments.

Powell stated that the Fed still has “some ways to go” in the current cycle of rate increases. That’s no surprise. What he did say was that “Data since our last meeting suggests that the ultimate level of interest rates will be higher than expected.”

This means that the target base rate could peak as high as 5% at some point over the next two years.

So rates are going to get higher. That’s not too shocking given that so far inflation has been coming down at what could optimistically be described as a glacial pace.

What is a surprise is that Powell also suggested that we may see some reprieve from the 0.75 percentage point hikes we’ve gone through at the past four meetings. “It may come as soon as the next meeting, or the one after that,” said Powell.

All of this is in an effort to provide the economy with a soft landing. Raising rates more slowly and for longer could help ease the immediate burden on households and give everyone time to adjust. In order to slow the fall of the economy though, the pain is likely going to have to be extended.

Right now the Fed is trying to find that balance between cooling the economy enough to get inflation headed back down, while not completely smashing the economy.

Their efforts are likely to be helped as the global supply chain heads closer to normality. There are still many issues on this front, but over time the prices of many goods will likely come down or stabilize simply because the supply does.

How the markets reacted

They did not love it. The S&P 500 fell 4.8% from its recent high after the announcement and it mainly came down to the comments around long term rates. The 0.75 percentage point increase was broadly expected, meaning it had already been priced into markets.

What wasn’t priced in was the forecast that rates would end up higher and over a longer period of time. Rising rates is already a challenging prospect for many growth focused companies, and the idea that this pain could be worse and last for long was not well received.

How can investors navigate this economy?

In challenging economic times, there is very little in the way of low hanging fruit. Over the past decade, throwing a dart at the NASDAQ 100 or S&P 500 and investing where it landed would probably have worked out pretty well for investors.

That’s not likely to be the case over the next decade.

Even if the Fed manages to reach the other end of the tightrope unscathed, we’re likely going to see a sustained period of low economic growth. In this economy, there are trades that can work if you know what to look for.

Luckily that’s one of our specialities. One example we’ve put in place is through our Large Cap Kit. During periods of low or no economic growth, big companies tend to outperform smaller ones. They usually have bigger, more diversified income streams, more cash on hand and less reliance on new customers to generate revenue.

That doesn’t mean they’re immune from volatility, but they can hold up better. To take advantage of this cap, the Large Cap Kit takes a long position in Russell 1000, which is the 1000 biggest companies in the US. At the same time, we take a short position in the Russell 2000, which is the next 2000 biggest.

It means that investors can generate a profit off the relative change between large companies and small to mid-sized ones. Even if the overall market goes down or sideways, as long as large companies hold up better than smaller ones, profits can be had.

Our AI automatically rebalances this trade on a weekly basis, and when we believe the opportunity is gone, we’ll close the trade for you.

For investors who want more of a flight to safety, our Precious Metals Kit is an AI-powered Investment Kit which invests into gold, silver, platinum and palladium. Each week, our AI uses swathes of historical data to predict the performance for each metal, and then rebalances the portfolio with the aim to produce the best risk-adjusted returns.

It’s the perfect combination of the world’s oldest asset class, and the most cutting edge technology.

Wealthy Chinese keep on spending while others cut back, survey finds
Housing Market Predictions For 2023: Home Prices Set To Fall For The First Time In A Decade
FTX spokesman Kevin O’Leary says he lost his $15 million payday from crypto firm
Op-ed: Investors need to wait it out before snatching up software stocks
Mark Cuban cold-called the Dallas Mavericks’ CEO to get her to take the job