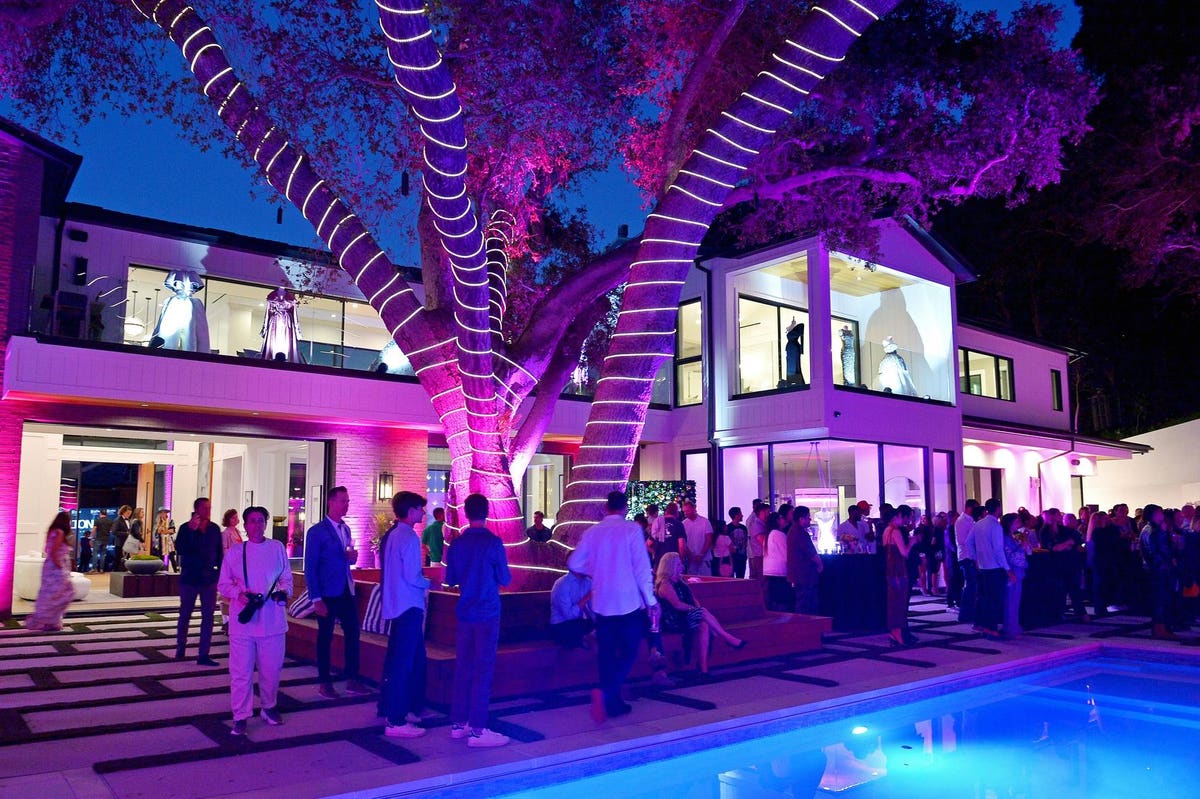 First up: Blanco, with its hints of mint, spice and caramel; Reposado, offering up raisin, honey and tobacco; and, finally, Añejo, with flavors of dark cacao, apricot and chestnut.

“It has a kick near the end,” says Barron, sipping the Añejo. Adds Tessa, his wife of four years, “It’s been so long since I tasted it.”

Nine months to be exact. Tessa Hilton was two weeks away from giving birth to a boy, Caspian, on Sept. 4, giving the parents a matching set; their daughter Milou Alizée is 2 years old.

The dynastic pair―Barron is the scion of Hilton Hotel founder Conrad Hilton and Tessa descends from German nobility―have more birth news: their recent launch of Hilton Estates Group, an avant-garde event production company of sorts that aims to boost profiles of properties that languish on the market. Fueled by their tequila brand, the events are a mix of au courant art, couture, cuisine and name entertainment.

The well-heeled crowd might include a few faces dashed with glitter, a crossdresser or two and, of course, Barron’s older sister, Paris.

In short, the bougie meets boho bashes are crafted to be as unforgettable as they are unconventional, creating a stir in elite real estate circles―drawing eyes and pocketbooks to properties lonely for suitors and that all-important sale.

Such immersive experiences are increasingly employed to rivet eyeballs on high-end estates. In hopes of luring buyers, some properties have starred in short films with five-figure budgets. In Los Angeles, urbane cannabis-themed open houses bake in sales opportunities with each bite of an OG Kush edible.

The Hiltons’ April launch event was held at their colisted property, 419 St. Cloud Road. The $39.5 million mansion is down the block from Ronald and Nancy Reagan’s former home at what was originally 666 St. Cloud Road―the address, considered an ungodly stain for some, was discreetly changed to 668 before the Reagans moved in. The Hiltons are brokers at Hilton & Hyland, which was cofounded in 1993 by Barron’s father, Rick Hilton. Barron is the firm’s Senior Vice President.

Singer Paris Jackson performed at the event, which was billed as the “Goddess Art Show,” with DJ sets mastered by Kim Ann Foxman. The 300 guests gathered on the terrace and grounds of the Georgian home with modernist styling.

The art displayed around the newly built home included “a beautiful sort of Andy Warhol-esque portrait series” created by her father, Tessa says.

The home’s vast 3,300-square foot terrace was used to display the art, which also included photography by Brian Bowen Smith and Kathyrn Boyd Brolin―husband Josh was in tow. Also present: “politicians, tech CEOS and entrepreneurs,” says Barron, adding that much beyond the Brolins, “we can’t really say who was there but, you know, some big people.”

Post-event, the couple hosted three showings with qualified buyers––not from the highly curated guest list, but from insider circles who caught the post-event buzz. “And then we thought, you know, this can really turn into something where other agents are coming to us,” Barron says.

The Hiltons trucked in some dazzle: fashion designer August Getty’s couture gowns draped on mannequins, including some designed for the Met Gala. The headliner for the estate bash: Getty’s famed “Million Dollar Dress” encrusted with 500,000 Swarovski crystals, displayed behind glass. Paris Hilton wore the $270,000 gown―its true value making for a lousy name―at the 2017 Hollywood Beauty Awards.

Singer Rainey Qualley performed for the 170 guests gathered around a stage at the 12,087-square-foot modernist farmhouse home. At one point, the plug was pulled on a riotous light show, plunging the crowd into darkness. Then, a DJ-mastered beat rose to a crescendo, the lights flipped back on and waiters marched out with trays of champagne glasses filled with Boston Market’s newest release: rotisserie chicken nuggets.

“It was weird, but it worked,” says Barron. “It was this big, impactful moment.”

“It was quirky,” adds Tessa.

“It was fun, kind of reminiscent of the Oscars,” Barron says. “They have the In-N-Out or Fatburger truck, and you see everyone in their beautiful suits and gowns eating these juicy cheeseburgers.”

While weaving in such contrast among the classes gets a crowd talking, Barron says the resulting Instagram-ready visuals make for optimal marketing grist―for the properties as well as partner brands, such as Ketel One Vodka.

The Hiltons say the events enliven what can sometimes be a staid profession, affording them a creative outlet.

“We were missing that artistic side, and we need to feed that,” says Barron, a hand on his tattoo-covered right arm. On his wrist: a Rolex watch that belonged to his father, gifted to him after they closed on W. Barron Hilton’s Bel Air home in 2021. “I had always admired it,” Barron says of the watch.

The hotel mogul―Barron Hilton’s namesake grandfather―lived in the Paul R. Williams estate from the 1960s until his death in 2019 at age 91. He is credited for expanding his father’s hotel empire and fortifying the Conrad N. Hilton Foundation, now among the world’s largest with assets valued at $8.5 billion.

While Barron’s artistic contribution to the couple’s new enterprise is backed by studies at Loyola Marymount University’s School of Film and Television, Tessa’s was partly honed in Berlin. She lived in the city during a Bard College study-abroad program when she was 19. She received bachelor’s degrees in written arts and French from the school located in Annandale-on-Hudson, New York.

Attracted to the underground music scene, Tessa frequented the trendy Kreuzberg district, which became a counterculture haven after the Berlin Wall fell in 1989. “I started to follow DJs who came from all over Europe,” says Tessa, who formerly worked in fashion. “I’d observe the sound and then worked with different synthesizers in the studio back on campus.”

She frequented the legendary techno nightclub Tresor, part of Kraftwerk, a former 1960s-era power station that hosts exhibitions and events. One morning in the cavernous space, she and others removed shoes and reclined on sleeping cots, covering themselves in silver space blankets to keep warm on that December day.

“There would be this sound design installation going on, live with different synthesizers,” she says. “The ceiling seemed to go on for miles. It almost becomes the sky as you listen.”

Tessa says such unconventional Berliner experiences “definitely have an impact” on creating events for the couple’s new Hilton Estates Group. “Obviously, they’re not going to be as trippy. Maybe not yet―maybe down the line. But it’s definitely helped me think outside the more conventional real estate realm.”