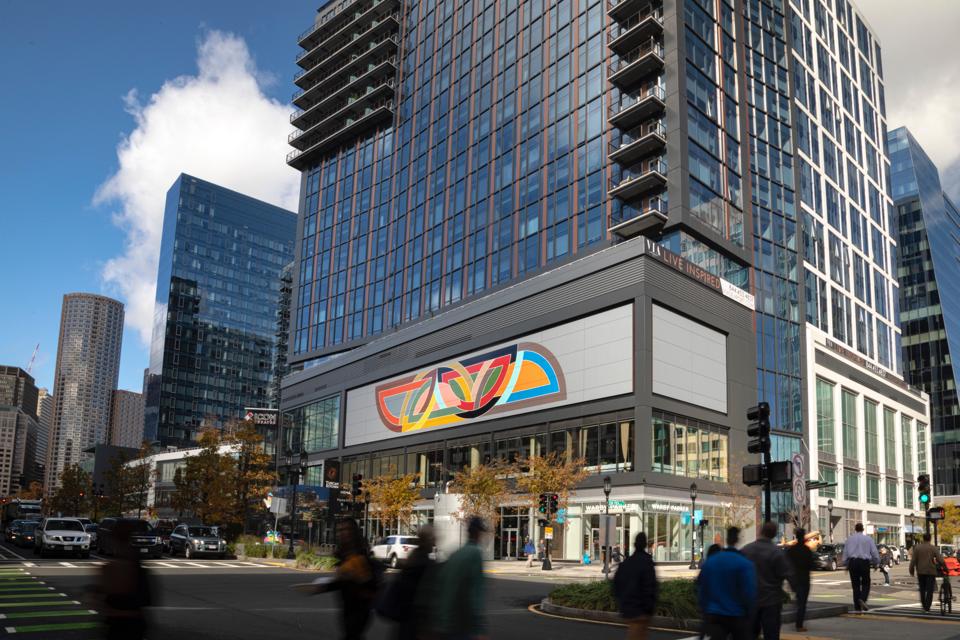 “Damascus Gate (Stretch Variation I) 1970” was one of the seminal paintings that made Frank Stella one of America’s great modern artists, part of his “Protractor” series begun in the late 1960s. The painting has been interpreted as a 98×18 feet mural. Today, it is unveiled as one of the largest public art installations of his 60-year career in Boston’s Seaport district.

A native of Malden, Massachusetts, Frank Stella is a painter, sculptor and printmaker celebrated for his work in the areas of minimalism and post-painterly abstraction. His vast contribution to American art began in 1959 with his minimalist series, “Black Paintings.” In the early 1980’s, the artist returned to Massachusetts to deliver a series of lectures at Harvard, which make up his highly regarded book, Working Space. He has been declared one of the most important American living artists, and his work is included in the most preeminent museums across the United States: the Whitney, the MoMA and the Guggenheim, and an upcoming exhibit at The Aldrich Contemporary Art Museum. Stella is also the only sole living artist with two MoMA retrospectives.

The “Protractor” series of paintings contains different variations, a combination of abstract geometric compositions containing colorful squares and circles that intersect in one of three patterns forming a symmetrical base. The paintings have the appearance of being three-dimensional due to the curves of the bright shapes but are, indeed, flat. The series serves as a transition from Stella’s flat work in the early 60’s to his three-dimensional work later in life.

In partnership with Marianne Boesky Gallery, Seaport has commissioned Stella to create the enormous mural. Global creative house Justkids oversaw its production, which is now visible on the façade of a building called One Seaport (60 Seaport Boulevard in Boston.)

“As we continue our work in Boston’s newest neighborhood, bringing internationally recognized works of public art into the public realm for all to enjoy is a top priority for us. Frank Stella’s “Damascus Gate” is an iconic work that we hope all Bostonians will proudly recognize as a very public symbol of the Seaport’s commitment to innovation in the visual arts,” says Yanni Tsipis, Senior Vice President, WS Development.

As interest rates climb, here’s why proposed caps on debt may not help reduce costs for consumers
Stocks making the biggest moves after hours: Intel, Visa, Hasbro and more
Oscar nominations: ‘Everything Everywhere All at Once,’ ‘Top Gun: Maverick’ among leaders
Ask Larry: Will Filing Early Lower My Wife’s Social Security Spousal Benefit?
Walmart-owned Sam’s Club plans to open about 30 new stores over next five years