Intel stock jumped as much as 8% in extended trading on Thursday after the chipmaker beat third-quarter earnings expectations and reignited revenue growth.

Revenue was up slightly on an annualized basis in the quarter that ended on Sept. 28, according to a statement.

The company needs to improve its execution in multiple areas, including supply, CEO Bob Swan told analysts on a Thursday conference call.

“We expect our second-half PC client supply will be up double-digits compared to the first-half, and we expect to further increase our PC client supply by mid-to-high single-digits in 2020, but that growth hasn’t been sufficient,” Swan said. “We’re letting our customers down and they’re expecting more from us.” Demand strength for PC chips is still outstripping supply, said the company’s chief financial officer, George Davis.

The top business segment, the Client Computing Group, which sells processors for desktop PCs, laptops and two-in-one devices, produced $9.71 billion in revenue in the third quarter, beating the $9.59 billion average estimate among analysts polled by FactSet, although it was down 5% from the year-ago period. The company pointed to lower platform volume in the segment.

The Internet of Things Group, which makes computing products for industries and embedded systems, had $1.23 billion in revenue. Analysts polled by FactSet had expected $1.12 billion in revenue from that segment.

Both Gartner and IDC said that PC shipments increased in the third quarter. Meanwhile, spending from companies with large data centers, like Amazon and Microsoft, started to bounce back in the period, both of which could have boosted Intel’s sales, Matt Bryson of Wedbush Securities, who has the equivalent of a sell rating on Intel stock, told clients in a note this week. 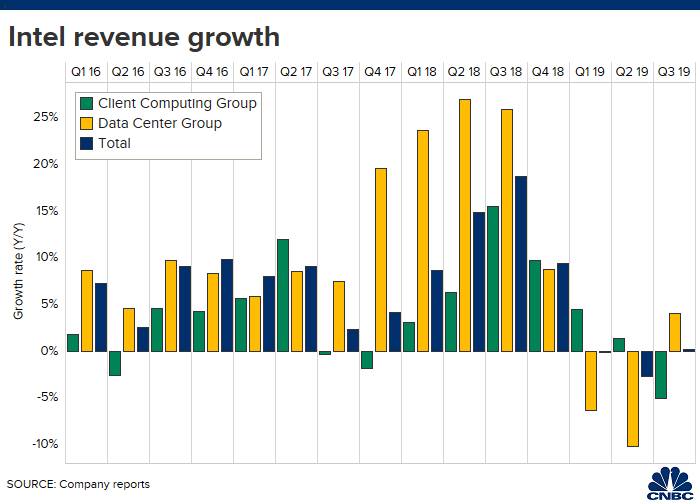 But Intel is dealing with issues cutting into shipments of 14-nanometer chips, and the company has slashed prices as it continues to compete with AMD, Bryson wrote.

“From an intermediate to longer term perspective, we believe INTC’s continued misexecution, whether in shorting certain Xeon customers, or PC OEMs/ODMs, should give those clients another reason to look more closely at AMD,” he wrote.

Swan said on the conference call that the world had become more competitive.

“We’re going to compete to protect our position and expand the role we play,” he said.

Intel announced the second generation of Optane DC Persistent Memory in the third quarter and said that Apple had agreed to buy the majority of Intel’s smartphone modem business in a deal valued at $1 billion.

Intel stock is up 11% since the beginning of the year.