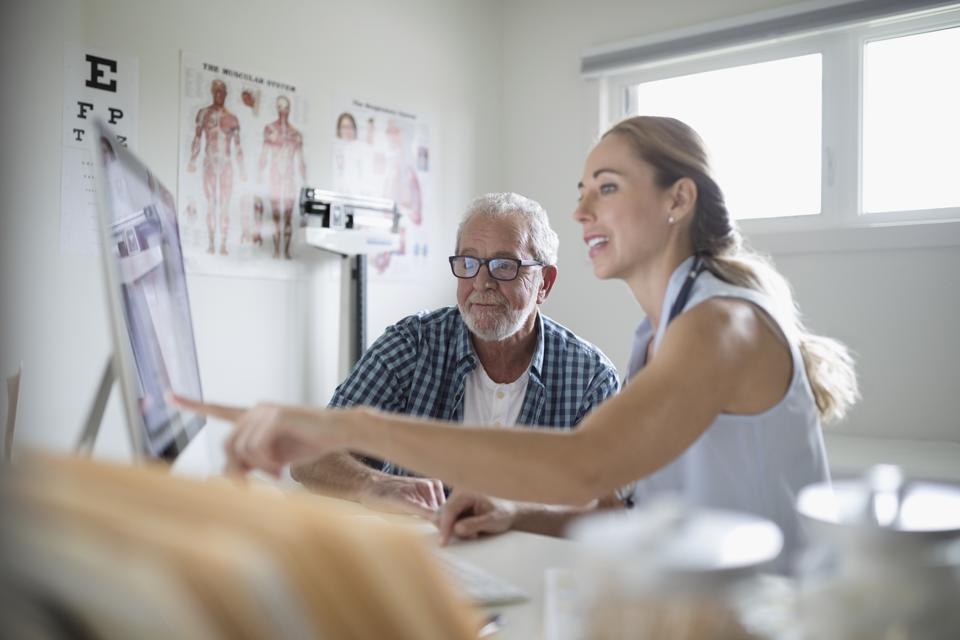 At what age should you see a geriatrician?

The easy answer is, there’s no easy answer. Merriam-Webster defines a geriatrician as a specialist in geriatrics, which in turn is defined as a branch of medicine that deals with the problems and diseases of old age and the medical care and treatment of aging people.

But everyone, including most older people, would argue that just as no two fingerprints are alike, no two people age alike.

Richard W. Besdine, MD, of the Warren Alpert Medical School of Brown University, wrote in the Merck Manual for medical information, that geriatrics refers to “medical care for older adults, an age group that is not easy to define precisely. ‘Older’ is preferred over ‘elderly,’ but both are equally imprecise.”

Though the world in general and the medical establishment in particular has sort of defined old as over 65 years of age, Besdine writes that “most people do not need geriatrics expertise in their care until age 70, 75, or even 80.” And some never go to a geriatrician.

Maybe it’s just as simple as this statement made by a specialist in both internal and geriatric medicine: “As a physician, I believe my patients should be treated with dignity. I strive to provide quality care to ensure that each patient has their needs met with compassion.”

Babatunde Olumide, MD, is board certified in internal medicine. So he treats anyone over the age of 18. But after his residency, he went on to complete a geriatric medicine fellowship from Saint Louis University School of Medicine. He said the experience was eye-opening.

While he was working as a hospitalist at a regional hospital in Jackson, Tennessee, Olumide decided he wanted to specialize in the treatment of the elderly. “I saw a lot of older people,” he said. “I saw that there were some weaknesses in the care of the elderly. People become more vulnerable because of age-related diseases. So I wanted to see what I could do to help. You feel for them. You realize if nobody helps these people, they can be found in terrible conditions.”

Besdine defines gerontology as the study of aging, but he includes the biologic, sociologic, and psychologic changes within his definition. Around the year 1900 in the U.S., people older than 65 made up 4% of the population, he wrote. Now they account for more than 14% (nearly 50 million, with a net gain of 10,000 per day). In 2026, when post–World War II baby boomers begin to reach age 80, estimates suggest that more than 20% (almost 80 million) will be over 65. The mean age of those older than 65 is now a little more than 75, and the proportion of those older than 85 is predicted to increase most rapidly.

Aging in general refers to the inevitable, irreversible decline in organ function that occurs over time even in the absence of injury, illness, environmental risks, or poor lifestyle choices (eg, unhealthy diet, lack of exercise, substance abuse), Besdine wrote. “Initially, the changes in organ function do not affect baseline function; the first manifestations are a reduced capacity of each organ to maintain homeostasis under stress (eg, illness, injury). The cardiovascular, renal and central nervous systems are usually the most vulnerable (the weakest links).”

Many of the parts and processes of the human body exist simply to maintain homeostasis. In other words, the machine exists so the machine can continue to exist. Homeostasis as the stability, balance or equilibrium within a cell or the body. It’s the body’s ability to maintain that balance and physical well-being in spite of changes or outside factors. An example is when bacteria or viruses that can make you sick get into your body, your lymphatic system kicks into gear to help maintain homeostasis or keep you well. Other examples are the ability of the body to maintain a balance of water, a healthy blood pressure or insulin level.

But diseases interact with normal (pure) aging effects to cause geriatric-specific complications or “geriatric syndromes,” particularly in the weak-link systems—even when those organs are not the primary ones affected by a disease, Besdine explains. “Typical examples are delirium complicating pneumonia or urinary tract infections and the falls, dizziness, syncope, urinary incontinence and weight loss that often accompany many minor illnesses in older adults. Aging organs are also more susceptible to injury; eg, intracranial hemorrhage is more common and is triggered by less clinically important injury in older adults.”

Besdine says the effects of aging simply must be taken into account during the diagnosis and treatment of older adults.

·      Be alert for diseases and problems that are much more common among older adults (eg, diastolic heart failure, Alzheimer disease, incontinence, atrial fibrillation). This approach enables clinicians to better understand and manage the complexity of the diseases that often coexist in older patients.

Olumide said it’s important to remember that as people age, they tend to have more sickness. They just do. “The whole essence of what we do is realize that as people grow older they are more prone to have more illnesses.” Some of these, according to Olumide, include:

·      Frailty – Examples are elderly people with fatigue, poor grip strength, trouble climbing stairs or walking a block, multiple illnesses or those on five or more medications. The frail are usually more susceptible to illness.

·      Sarcopenia – A generalized loss of skeletal muscle mass and strength.

·      Delirium (different from dementia, in that delirium can be the result of medications, infection such as a urinary tract infection, or lack of sleep). Delirium usually presents right away in an intense degree.

Olumide reminds us that every older patient is different. A person can be old and not frail or not on multiple medicines. The best answer to whether a person should see a geriatrician is whether they and their family think they should. He said maybe just determining the frequency with which they should be evaluated and by whom is the best course of action. He recommends older adults seeing a someone who specializes in geriatrics every three to four months if a person has multiple health issues, geriatric syndromes or is on more than five medications.

Still, whether an older person goes to an internist or a geriatrician, family and friends should get involved, Olumide said. “I feel strongly that the family has to get involved and be engaged because what is really happening is that all hands have to be on deck—children, grandchildren, neighbors—to provide care for the elderly. Whether someone is in a nursing home or in their own home, families give hope and make them feel better. If grandma is alone, look out for her.”

Jim Cramer’s Investing Club meeting Monday: Dow stocks, Fed, Ford
Stocks making the biggest moves after hours: Whirlpool, NXP Semiconductors, UnitedHealth and more
Stocks making the biggest moves after hours: Tesla, Chevron, ServiceNow, Levi Strauss, IBM and more
The Fair Tax Act, explained: what to know about the Republican plan for a national sales tax, decentralized IRS
The outgoing CEO of a giant autos firm had a message for his successor: Don’t be like me