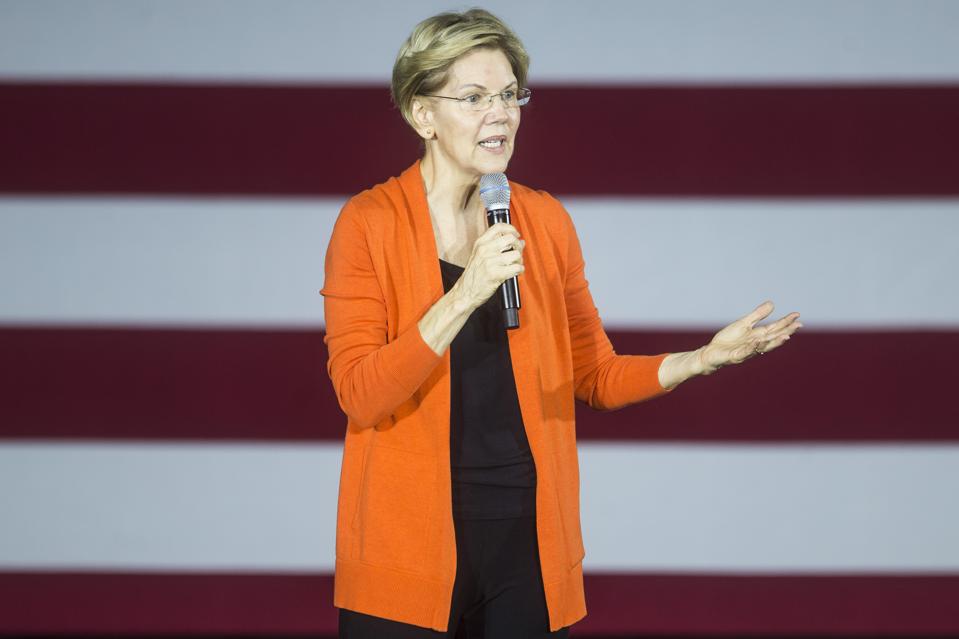 Democratic presidential hopeful Elizabeth Warren says she’ll disclose her plan to pay for universal, public health care within the “next few weeks.” But finding the $32 trillion she’ll need for the first 10 years alone is neither easy nor obvious. And the money might well have to come from outside of the current tax system.

Warren has two problems: The sheer cost of the Medicare for All plan she has endorsed and the financing constraints she has created for herself.

Let’s start with the cost: My colleagues at The Urban Institute estimate that a universal  government health plan of the sort proposed by Sen. Bernie Sanders (I-VT) and endorsed by Warren would increase federal health care spending by a net of $32 trillion over a decade. Such a plan would replace all private insurance with single-payer government insurance with no premiums and very limited co-payments.

For context, the Congressional Budget Office estimates  that under current law the federal government will raise about $45 trillion in revenue over the next decade. So Warren (and, for that matter, Sanders) would have to increase federal taxes by 70 percent to pay for health reform. Or, to put it another way, she’ll have to raise taxes by about 10 percent of the nation’s total economic output. She also could find the money by cutting spending, though according to CBO estimates, she could eliminate the entire  discretionary spending budget and fund only half the cost of Medicare for All.

Keep in mind the $32 trillion represents a net increase in government costs. At the same time, the cost of privately-paid health care (through insurance or out-of-pocket spending) would shrink dramatically. Thus, much of the tax increase that Warren needs would be offset by a decline in personal health care spending. And some of the reduction in health spending by employers would result in higher wages or larger business profits that would be subject to tax. Still, most of the $32 trillion will have to come from unpopular tax hikes.

And she needs to find the money under several self-imposed constraints. To start, she has promised that any tax hikes on low- and middle-income households will total less than their current out-of-pocket health care costs. “I will not sign a bill into law that does not lower costs for middle-class families,” she said at a recent debate.

Warren’s other constraint is that she already has dedicated a long list of tax increases on the wealthy to other initiatives. For instance, her wealth tax—which she, probably optimistically, says would raise about $2.7 trillion over 10 years—would pay for education and early childhood programs. Hikes in the payroll tax and the net investment income tax on high-income households would fund increases in Social Security benefits.

Similarly, she’s found uses for her proposals to raise corporate and estate taxes and ending “stepped-up basis” that allows heirs to avoid tax on increases in the value of assets over a decedent’s life.

So where else can she get $32 trillion? More to the point, could she get it only from the wealthy (defined any way you want)?

The answer to that question is simple: No, she couldn’t, either as a matter of economics or politics.

To see why, think about some potential tax increases on the rich. She could:

·        Tax capital gains and dividends at ordinary income tax rates, or even tax accrued investment earnings each year whether assets are sold or not. Top Senate Finance Committee Democrat Ron Wyden (D-OR) would do both, and, he says, raise between $1.5 trillion and $2 trillion over 10 years.

·        She could borrow Sanders’s financial transactions tax. TPC projects it would generate about $400 billion over 10 years.

But how likely is it that Congress, even one controlled by Democrats, would impose a wealth tax, a big individual income tax increase, a financial transactions tax, and a capital gains tax hike on the same people?  It is possible to imagine a Democratic Congress passing one of these ideas, or maybe two.  But all of them?

And if it did, it would create very high effective marginal tax rates on high-income, high net-worth people that could top 100 percent. This would slash their incentive to work and invest and increase their incentive to avoid and evade taxes. One result: Those changes in behavior would sharply reduce any hoped-for revenue.

That leaves other broader-based tax hikes. Warren could boost individual income tax rates on everyone. CBO figures a 1 percentage point across-the-board increase would raise about $900 billion over 10 years. But for many low- and moderate-income people, who pay zero premiums today for Medicaid or government subsidized health insurance, a higher individual income tax rate (or some other income-based tax) would result in net higher costs to many, violating Warren’s promise.

Alternatively, she could propose a new business tax, or a new consumption tax such as a Value-Added Tax (VAT) or a carbon tax.  A broad-based 5 percent VAT would raise about $3 trillion over 10 years, according to CBO.  But such a plan would require rebates to protect low- and moderate-income households from big tax increases, reducing net revenues.

Paying a $32 trillion bill through the existing tax system alone seems impossible, especially given Warren’s promise to not raise net health/tax costs for middle-income households. She will have little choice but to scale back her health care ambitions, cut other spending, borrow the money, or find new—and controversial— sources of revenue.  Raising existing taxes on the wealthy won’t get her there.