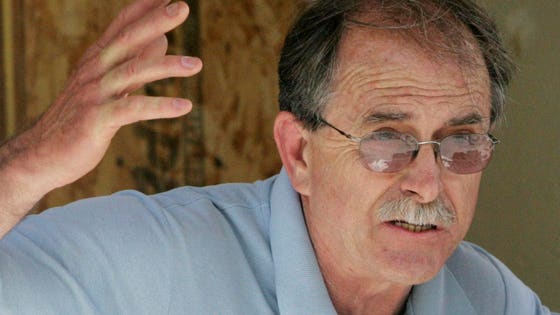 According to the Bureau of Prison Inmate Locator, Edward Brown, age 77, has a release date of 7/26/2045 and Elaine Brown, age 78, has a release date of 11/8/2042. Clearly, the sentences that they received in 2009 were virtually life sentences. They had been prosecuted as the result of a months long armed stand off at their home in New Hampshire. They had been resisting surrendering to serve a 2007 sentence related to tax resistance activities.

I started following Rudy Davis during the run–up to Kent Hovind’s trial in 2015. Rudy was probably the most vocal of the Hovindicators. Since then Rudy has developed a ministry devoted to people he considers to be political prisoners, the Browns being among them.

When Rudy “adopted” the Browns, I had an exchange with Rudy and indirectly with Ed about the case. And it was Rudy’s facebook that alerted me to the latest development. One of the counts that the Browns were convicted on was overturned based on a recent Supreme Court decision – US v Davis (No relation to Rudy).

Initially I thought that was not that big a deal. The way the federal sentencing guidelines work one count, one way or the other, will often not affect the guideline sentence that much. The guidelines are a topic that defy easy simplification, but if you want to learn about them, you can read this manual. It turns out I was wrong.

I checked in with attorney Peter Goldberger, who has represented people with alternative views of our tax system. (My term for them is “Not Conventionally Tax Compliant”. A shorthand term is “tax protester”, which the IRS is forbidden from using.)

Number 3 , the 924(c) destructive device one, is special. When the counts are kind of melded together to determine the “offense level” in the guidelines, that one is not included. It is a mandatory tack-on of thirty years. So if you just get rid of that without changing the sentence on the others, the Browns go home.

Apparently it is possible for the judge, to increase the sentence as it relates to the other offenses so it is not a sure thing. Nonetheless, without the thirty-year add-on, it is likely that the Browns get out within their lifetimes.

Rudy Davis is quite pleased, as you might expect. He wrote me :

Some people see the Brown’s as tax rebels who need to be made an example of. I see them as people of righteous integrity who follow and live the truth no matter the consequences.

“They have been horrifically treated in prison even to the point of near death by gassing as in the case of Ed Brown. Ed is also in very poor health because of a bad prison diet. The Brown’s, Jason Gerhard and Daniel Riley have my upmost respect and support. They all four have courageous and bold hearts. I only wish the success, peace and joy in whatever God has in store for their future. “

During the stand-off, then Presidential candidate Ron Paul had endorsed the actions of the Browns, but then backed off a bit. Rudy is still mad at Ron Paul about that.

Ron Paul called the Browns heros in a WeAreChange interview and then changed his tune and crawfished when pressured to do so in a Neal Cavuto interview on FoxNews. There is nothing wrong with being willing to defend your position even to death or capture. We need more Brown’s in this country. I consider Ron Paul a coward in that action.

JJ MacNab, who has been a Forbes contributor and is a leading authority of ant-government extremists has a twitter feed giving really good background on the case

My attitude toward the possibly impending release of the Browns brings to mind Anthony McCann’s Shadowlands: Fear and Freedom at the Oregon Standoff The book is a quite thorough account of the group of “patriots” who occupied a federal wildlife refuge led by Ammon Bundy in 2016. Ammon is the son of Cliven Bundy, whose standoff with the Bureau of Land Management in 2014 attracted a great deal of coverage including some by JJ MacNabb.

Anthony McCann is not a journalist. He is a poet. This made the thorough account much richer and reflective. The Bundy’s beef with the federal government, like most of the not conventionally tax compliant is based on alternative views of the Constitution, which McCann treats at length, but that is not what is of interest here.

What is of more interest is the common ground between the left and the right in reaction to the prison-industry complex and militarized policing. In Chapter 24, he compares the views of Don’t Shoot Portland activist, Teressa Raiford and Malheur Occupier Jason Partick. There was a run-in between DSP protesters and a group celebrating the release of Ammon Bundy.

“Jason wished he’d been there that day when Don’t Shoot Portland had marched past the courthouse and the Bundyite celebratory barbecue. Teressa and her friends had done a die-in in front of the courthouse—and the Patriots had just watched. If only he’d been there, Jason rued. “I would have joined them, I would have said, ‘Come on, let’s lie down in the street with them. They’re sad about their guy, we’re sad about our guy.’ ” “

Overall in this story, I think the real heroes might have been the law enforcement people who patiently waited out the Browns and eventually, with a bit of deception, took them into custody.

Still, I can be glad that they don’t have to spend the rest of their lives in prison. I tend to think that more thorough civil enforcement would do a lot more to put a dent in tax protester shenanigans, than making the occasional example of people like the Browns.

About The Davis Decision

The decision found that a 924(c) was unconstitutionally vague. The opinion was delivered by Neil Gorsuch with Breyer, Ginsburg, Sotomayer and Kagan supporting him. I wondered if the decision would only be helping people like the Browns who had some outside help. Peter Goldberger answered that question also:

“The Federal Public Defenders around the country have tried to make a systematic effort to identify the affected defendants, at least the larger number of them that the Defenders represented, and move for correction of their sentences.”

“Their protest inspired other anti-tax advocates to join the standoff in the otherwise quiet town of Plainfield. According to media reports from the time, supporters supplied the Browns with food, water and cell phones after electricity was cut to the home. Concerts were staged on the property, which sat across a dirt road from a summer home owned by Supreme Court Justice Stephen Breyer.

The standoff ultimately ended quietly, with U.S. marshals successfully posing as Brown supporters to gain entry into the home. “

Biden administration rolls out a blueprint for a ‘renters bill of rights’ – Here’s what it includes
Suze Orman: Americans are short on emergency savings amid ‘dangerous scenario’ for economy
Here’s where mainland Chinese traveled overseas for the Lunar New Year
Tax season starts with boosted IRS workforce, new technology as agency begins to deploy $80 billion in funding
IRS warns tax refunds may be ‘somewhat lower.’ With high inflation, that’s a ‘double whammy’ for families, says advisor