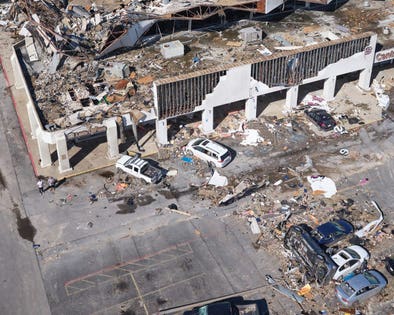 We lived through what we now know is the most costly tornado in Texas history: more than two billion in damages, according to the Insurance Council of Texas. More than 30,000 auto and residential claims have been filed to date, and ICT tells me claim costs could be higher because this storm hit the swankiest neighborhood in Dallas, loaded with multi-million dollar estates: Preston Hollow.

Even former President Bush and his wife, Laura were in the pathway: an elementary school walking distance from their home was blown away.

Our neighborhood is still in shambles. I was home-bound for two days, unable to drive on streets choked with power lines, poles and fallen trees. Virtually every street has some damage from the twister, be it spliced trees, ripped shingles, debris the storm dropped (like the Gap jeans) or, in extreme cases, roofs blown away, homes collapsed.

In one home near the late Ross Perot’s Strait Lane estate, the roof is gone, the house collapsed, but dishes in a wall-mounted display cabinet are untouched. A $4.7 million home directly east of his estate had the roof sheared off.

Pools, which proliferate in this part of town, are also a mess, choking with debris. A friend with a natatorium lost every piece of glass in the structure: what wasn’t carried off in the funnel landed in the pool.

One of our corner shopping centers, where I had been shopping hours before the storm, was wiped out and is a complete loss.

But the best news of all, and something that I almost cannot believe, is that we had zero loss of life or major injury from this storm.

Chris Tuveng was picking up a pizza at Little Caesar’s during halftime of the Cowboys game. He got sucked out the door and into a breezeway. He managed to hold onto a stucco pillar (and later, a truck hubcap!) in front of the store. Battered and bloodied by debris pummeling his back and legs, he was released from the hospital after five hours.

“I was getting pounded by debris. Whatever was flying through the air just hit me,” Chris told WFAA. “I was just holding on. I didn’t want to get blown away. I started holding on to the tire, and I grabbed the rim to just hold myself lower to the ground,”

Another resident used all his might to keep a closet door shut as the storm roared through their home, his family huddled inside. Another was standing in her kitchen as the roof blew off her home.

Thank God no one was killed.

Our City Councilwoman, Jennifer Staubach Gates, (daughter of Roger Staubach) said she didn’t believe until last Wednesday there was no loss of life. We are all just shaking our heads about that because the last bad twister that hit the day after Christmas 2015, an EF-4, claimed 11 lives and $1.2 billion in damage. That one, like this one, came up fast, furious, but tore up densely populated residential neighborhoods east of Dallas.

Some seriously think it was because everyone was watching the Cowboys game that Sunday night.

I had a hard time believing that a thunderstorm was headed our way on October 20. It had been a beautiful fall Sunday, the sun warming just enough, the air finally cooler and losing the hideous humidity. The storm came up almost out of nowhere. At about nine pm my husband told me his iPhone weather app reported a tornado at our in-town Love Field airport, the one we can get to in 15 minutes.

We probably need to get in the storm room, he said.

When we built our home nearly 20 years ago, he insisted that, since we live in Tornado Alley, we install a FEMA-approved storm room under the front stairway. I fussed I was losing storage space, but agreed. He and my son helped reinforce the closet with brick, our builder triple framed it and installed a metal door that bolts from the inside. Nothing fancy in there, just carpet, four walls (one curved), a phone, outlets and space to store flashlights, towels and bottled water.

We have hidden from six tornadoes since moving into this house, including the EF-4 in Rowlett.

We got in Sunday, October 20th at about 9:10 pm. as the city tornado sirens were going off.

I ran out to grab an exercise ball (to sit on), and noted how still the gray air was outside our dining room window. A part of me wanted to watch the storm, but I had been outside briefly during the “micro-burst” mini tornado we experienced in June: 70 mph winds are terrifying.

We burrowed into the closet and waited, frantically texting our daughter to take cover at her house 4.9 miles north.

It was quiet, and then we heard a gushing, roaring wind. The train noise.

We had no idea an EF-3 level twister was passing right over us.

Our electricity flickered then went off. We would not know until the morning that the mammoth Live Oak in the lot across the street from us had been uprooted, as if a giant had pulled it from the ground. That was how close our home had come to uprooting.

We had no idea of the destruction that surrounded us, of the power outages: 65,000 people without. We learned from social media that a nearby Home Depot had been severely damaged. Next we heard that buildings on the far west side of Dallas had been damaged. Turns out the tornado cut a swath from west to east across Dallas neighborhoods, starting north of Love Field then hop-scotching from one street to another.

That night social media unfolded the damage, report by report. Neighbors reported on their home’s damage, then went silent as they dealt with it. It was pitch black, and raining, so very few photos showed much of anything.

For the first time ever, Facebook asked me to mark myself as safe.

It wasn’t until the morning that we realized our beautiful neighborhood, known for its immense trees and beautiful homes, looked like a war zone. We had even lost our fire station.

The home devastation was and is sickening, but it was the tree shearing that got me. As one of my contractors put it, we can rebuild the properties, we cannot re-build the trees.

And one of the biggest selling points of Preston Hollow has always been the trees. People tend to think of Dallas as a tree-less, barren prairie of cotton fields. For the most part, in the northern suburbs, it is. At one of my first reporting jobs when I moved to Texas in the 1980’s, I asked a production builder why they cut down all the trees? He answered, this is prairie, there are no trees: that’s one reason building is so much cheaper here.

Now many of these properties have lost not only estates but huge, graceful trees. One friend who lost every tree on his one acre estate tells me insurance will not cover the trees, valued at $40,000 apiece.

Every day now is the sound of surveying helicopters, sirens and chain saws. Seven minute commutes have became two hours because so many east-west thoroughfares are closed off. Preston Road, the first road in Dallas, etched by city founding father John Neely Bryan in 1839, remains blocked. We had to drive out and around on the interstates and tollway to get north, get south, get home, dodging trees on the side streets.  Dallas police placed a curfew on us, 7 am to 7 pm, to keep people away from potentially live downed wires, keep looters out.

We were asked to show our ID’s to get out and get in.

But still, no lives lost.

True to the character of our neighborhood, there were lost dogs, pigs, and chickens.

No lost horses, even though you can still keep one horse per acre in Preston Hollow.

Homeowners cried in front of their demolished homes, the contents of cabinets and closets strewn across Dallas, then they pitched right in and worked sun-up to sun-down: salvage, pack, hire a mover to store it, get to a hotel, lease a home. Students helped clean up their school.

The generosity of the city has already shone: countess restaurants are feeding the clean-up crews, many of whom have come in from other cities to help, armed with chain saws, working pro bono. Pizzas, sandwiches, water, all being delivered by neighbors, churches, and businesses, including one that lost a flagship grocery store: HEB, Central Market. Jerry Jones is giving one of the demolished high schools a million dollars, Mark Cuban is giving the same amount to the city.

My friend Diane Feffer says it will take about six months to reconstruct her home — she lost half of it. Five families from two streets with many total home losses ended up at the same luxury apartment: Dallas leasing has already picked up.

I saw my neighborhood shopping center for the first time this weekend, and cried. These stores are extensions of our every day life, the joints we frequent to grab a gallon of milk or a quick bite. To think that this much destruction came in a twenty minute time span, so quickly, disrupting the lives of so many is mind boggling.

And it will happen again: between 2008 and 2015, storms that caused at least $1 billion worth of damage doubled.

Just shows us who really is in charge: Mother Nature.