Lyft on Wednesday released its earnings report for the third quarter, where it beat on both the top and bottom lines, as well as raised its revenue guidance for 2019. The stock fluctuated following the report and was up 1.4% in extended trading.

For the full year, Lyft now expects to report revenue between $3.57 billion and $3.58 billion, which is an increase from its prior guidance of $3.47 billion to $3.50 billion. The company also projected revenue between $975 million and $985 million for the fourth quarter, which significantly exceeds analysts’ expectations for $943 million in revenue.

The company reported a net loss of $463.5 million during the quarter, which is wider than the net loss of $249.2 million it reported in the same quarter a year ago. Lyft blamed the increase in net losses on $246.1 million in stock-based compensation and related taxes tied to its March IPO. 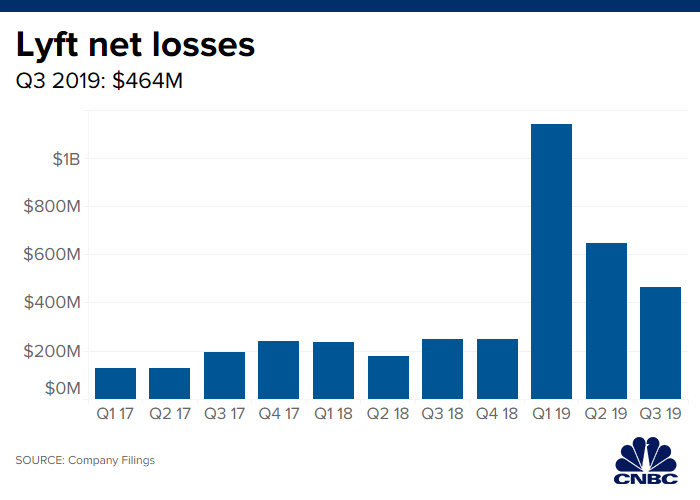 Lyft reaffirmed its earlier statement that it expects to be profitable on an adjusted EBITDA basis by the fourth quarter of 2021, which is one year earlier than analysts were expecting. EBITDA is a measure of operating profits before financing-related expenses like interest, taxes, depreciation and amortization.

In a call with CNBC’s Deirdre Bosa, Lyft CFO Brian Roberts said the company is focused on achieving profitability.

“We’re not doing food, not doing trucking,” Roberts said. “We are 100% focused on our transportation network and platform scale to unlock more efficiency.”

In addition to the better-than-expected results and brighter guidance, the company reported it had 22.3 million “active riders” on its platform in the third quarter, compared to consensus estimates of 22.1 million active riders. Revenue per active rider surged 27% year-over-year to $42.82.

Roberts said Lyft has benefited from a market wherein people are more willing to pay full price for rides on the platform. On a call with analysts following the report, Roberts said he expects fourth-quarter revenue per active rider to grow faster than it expected.

“The market is increasingly rational. There is significantly less discounting than a year ago,” Roberts said. “We expect these market conditions will continue as the industry focuses on achieving profitability.”

Correction: This article has been updated with the correct revenue expectations.

How A 529 Plan To Child IRA Conversion Can Turn Your Teen Into A Middle-Class Millionaire
Stocks making the biggest moves midday: American Express, Intel, Silvergate Capital and more
Carmakers face a crossroads as they work to fit auto dealers into their EV plans
How To Avoid The 5 Most Frequent Reasons Retirement Plans Fall Apart
Charitable Gift Annuity Planning Opportunities Under Rising Interest Rates