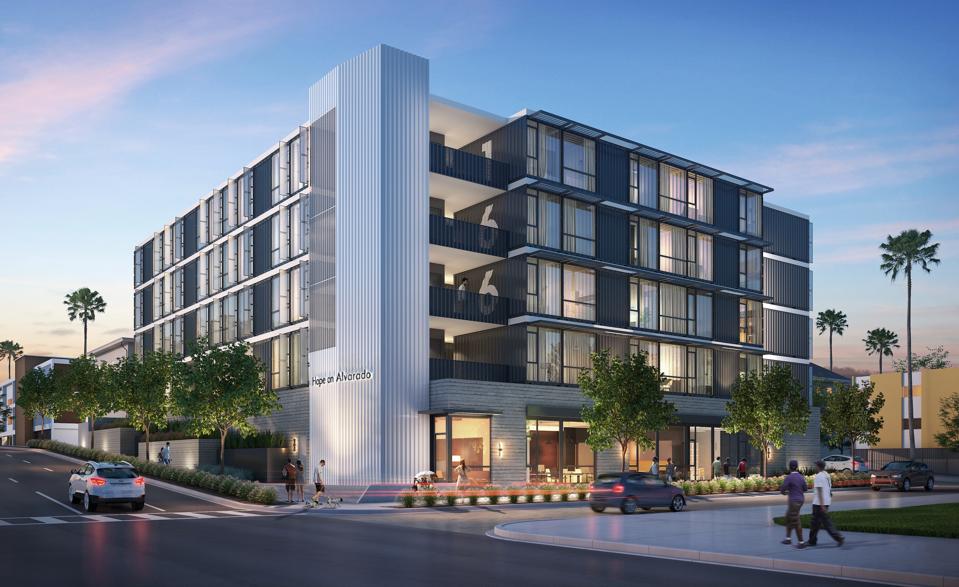 In addition to Hope on Alvarado, two additional developments using the same technology – Hope on Broadway and Hope on Hyde Park – recently received City of Los Angeles Measure HHH funding, a $1.2 billion bond to build approximately 10,000 units of supportive housing. The City chose Hope on Broadway ($6.7 million HHH loan) and Hope on Hyde Park ($9.3 million HHH loan) as part of the Proposition HHH Permanent Supportive Housing Loan Program (2018-2019 Call for Projects Round Three). The developments were awarded high marks for the following factors: location in a transit-oriented-community (TOC), geographic location in neighborhoods where housing is needed, the number of units designated as supportive housing, and strength of concept and development team.

“The partners of the Hope On developments have devoted themselves to perfecting this modular solution because we believe it holds great promise for the housing crisis,” says Aedis Real Estate Group President Scott Baldridge. “This is not just a one-off project. It’s a series of places created with a highly replicable design that delivers housing at a speed and scale required by neighborhoods in need.”

The designs for Hope On were conceived of by modular architect Peter DeMaria, chief design officer at HBG/Azria and KTGY Architecture + Planning, who was seeking a way to apply the innovative system of modules to a historically successful architectural design scheme. “The Hope On team has advanced technology using steel modules that have the potential to radically transform modular housing,” says KTGY Architecture + Planning Associate Principal Mark Oberholzer. “While site work and foundations are done on site, the modules are manufactured off-site with customized interior finishes and fittings, resulting in highly efficient speed-to-market,” which in turn allows the Hope On system to “accommodate larger-scale buildings on shorter time frames,” according to Oberholzer.

The design of each Hope On development is centered on a central courtyard, intended to provide privacy, safety, and to support a sense of community. A mix of studio and one-bedroom units (ranging from 400-480 square feet) will be available via County of Los Angeles social services. Hope On Alvarado is built to LEED standards, with speed of construction and efficient use of building materials among the project’s sustainable attributes.

Oberholzer describes the design of Hope On Alvarado as a “mixed-use, pedestrian friendly urban building, but instead of retail on the ground floor, there are services for the residents.” Residents will have access to community rooms, bike storage, parking, laundry facilities, and a supportive services suite, noting that case workers will be on staff “to support the residents as they transition away from homelessness.” Oberholzer explains that future Hope On builds may have a mix of street-level retail and support services, as the team works to “make sure each building ‘fits in’ with its neighborhood context.”

The Hope On team is cautiously enthusiastic about the transformative potential of this concept, as Oberholzer states that “Hope On directly serves the homeless in the form of providing supportive housing, but we are very aware that the very high rate of homelessness in Los Angeles can’t be solved only by building.” He notes that his team has seen “concerted efforts from many sectors–from developers building supportive housing, to public officials voicing and acting in support of zoning and policies that enable more help to come to the citizens of the city.” Oberholzer further states that “growing public awareness and the resulting voter-approved funding to support housing and services have begun to change the so-called stigma of homelessness,” adding, “I can’t tell you how many people I’ve met personally who have a relative living on the streets.”

Higher Social Security cost-of-living adjustments may affect your taxes. Here’s how to plan
Binance was final destination for millions in funds from Bitzlato, exchange shut down for alleged money laundering
Walmart-owned Sam’s Club plans to open about 30 new stores over next five years
Going Up From Here? Home Prices Post Small Increase As Rate Drop Lures Buyers
Be Aware Now: Here’s Where SECURE 2.0 May Hand You Unexpected Benefits